Title race is on 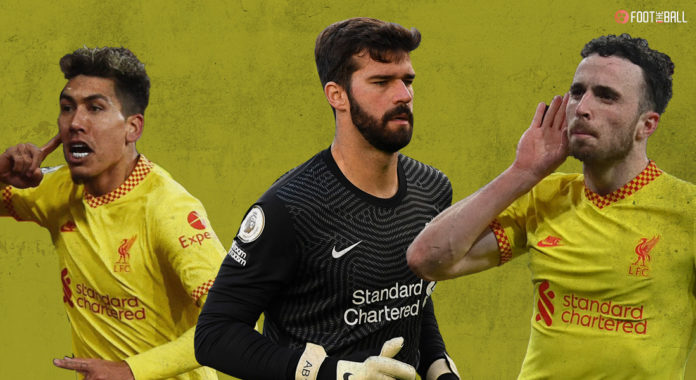 The Premier League title race is now officially on as Liverpool defeated Arsenal 2-0 to move within one point of league leaders Manchester City. Diogo Jota and Roberto Firmino were on target for the visitors, and Arteta’s men failed to trouble Alisson.

It took two minutes for the first chance to arrive, with Virgil Van Dijk drawing out a save from Aaron Ramsdale. Minutes later, Bukayo Saka was almost on goal, but Andy Robertson cut out Martin Odegeard’s pass. After that, the match continued back and forth as both teams looked to dominate the other. Mane almost put Jota on goal before Martinelli did the same with Lacazette. However, both teams struggled in the attacking third despite their fluid play.

Meanwhile, the Arsenal midfield repeatedly fed the ball to Saka on the right-wing. However, it was the finishing touch where the players continued to disappoint. Arsenal were time and again exploiting gaps left by the Liverpool full-backs. Martinelli was almost put on goal after a brilliant pass, but an alert Alisson snuffed out the danger.

Also read: We predicted from the numbers, Luis Diaz was bound to succeed at Liverpool

Arsenal were oozing confidence, but Liverpool almost managed to score before the end of the first half. A brilliant long field pass from Alexander Arnold found Mane. However, with two defenders breathing down his neck, he could not control the ball and missed the chance.

✊ A strong first-half from The Arsenal

🔋 Let’s bring that energy after the break

The second half witnessed the same frantic start as the first one, as Mane scored within seconds of the restart. However, the Senegalese was almost a yard offside. Arsenal’s response was quick. Martinelli, who was conjuring magic on the left side, created a moment of brilliance by dribbling past three Liverpool players. However, his pass was cleared by the defense.

Arsenal should have had the lead with their next chance. Thiago made a back pass to Alisson, not realising that Lacazette was lurking behind the defense. The French striker squared up the ball to Odegaard, who was denied brilliantly by the Brazilian goalkeeper.

These two chances were enough to jolt Liverpool into life, who finally broke the deadlock.

Thiago’s pass put Jota on goal, and the Portuguese scored past Ramsdale at his near post.

And it was Firmino who doubled Liverpool’s lead. It all started with Alexander Arnold’s pass from the right side. The ball fell to Thiago and Salah, who both failed to score. However, Robertson recovered the ball and his pass from the left side was smartly nudged into the net by Firmino.

9 – Despite not scoring in this fixture since 2018, Roberto Firmino has now scored nine goals against Arsenal in all competitions, more than versus any other opponent since joining @LFC. Knack. pic.twitter.com/BK2jDROlQM

With two goals to the good, Liverpool started to slow the match’s tempo.

Arsenal did get the ball in advance areas, but Liverpool’s defense was on hand to snuff out any opportunity.

Martinelli had a brilliant chance in the 87th minute, but his shot went just wide of the post. This was the significant difference between the two sides as Liverpool took their chances and Arsenal didn’t

This win has far more significant consequences beyond this match, and here are the key talking points from the game.

The title race is truly on

Both teams have now nine games in hand and are also set to face each other at the Etihad in April.

10+ – Trent Alexander-Arnold (11), Mohamed Salah (10) and Andrew Robertson (10) have all made 10+ assists in the Premier League this season, the first time a team has had three players do so since 2019-20, when the same three men also managed it for Liverpool. Luxury. pic.twitter.com/qfaj4st4yb

Pep Guardiola cannot afford another slipup like Crystal Palace again as the consequences could be dire. However, for the neutrals, the end of the league just got more exciting.

The last time when Arsenal met Liverpool in the league, they lost 4-0. However, one stat that clearly showed the difference between the two teams was the Expected Goals (xG). According to the data analytics site Understat, Arsenal had an xG of 0.27. However, Arsenal have now begun to turn their season around. In addition, Martinelli caused all sorts of problems for Alexander Arnold.

#ARSLIV
Arsenal is Losing but Martinelli has been a standout to the gunners 🔥 pic.twitter.com/EbvtB0r3uO

Arteta’s men were on the front foot for most of the first half, and if they had Odegaard had scored, the flow of the match could have been different. There is still a long way to go, but at least now they are heading in the right direction.