The battle at the Emirates⚔️ 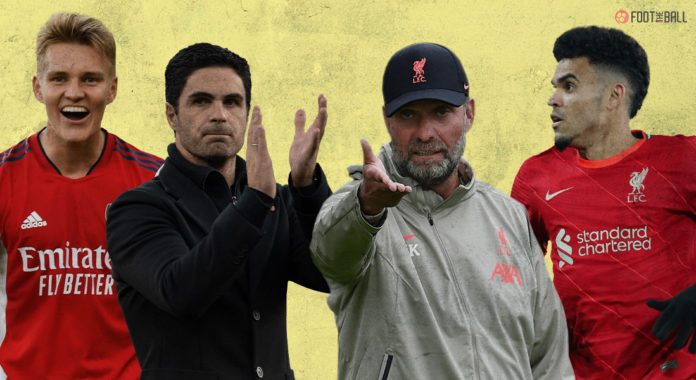 Two of the most in-form teams going head-to-head. Arsenal are tightening their grip on fourth spot while Liverpool have the summit in sight.

The Gunners have won five out of five heading into this contest. Mikel Arteta has overseen a remarkable turnaround since the start of the season. Arsenal are already a point ahead of Manchester United, having played three games less. One of the youngest squads in the league is really shining as of late. Martin Odegaard was the linchpin in the win over Leicester City.

🍿 Time to enjoy it all over again, Gooners!

The English duo of Bukayo Saka and Emile Smith Rowe are having breakout campaigns themselves. Alexandre Lacazette is leading the attack brilliantly through his overall game. In short, there are a lot of positives every week for Arteta to take home. However, the test against Liverpool at home will be one of the more sterner ones from now till season’s end.

Jurgen Klopp’s have been on a roll themselves, having lost only once across all competitions this year. They have won eight consecutive games in the Premier League, stretching all the way back till January. Therefore, it is no surprise that they sit just three points behind Manchester City currently. Mo Salah has picked up right where he left off before going to AFCON along with Sadio Mane.

Head to @LFCTV GO for full match replay, highlights and reaction from #BHALIV 🔴

The frontline has been boosted with the addition of Luis Diaz who has adapted supremely well. Joel Matip is in the form of his life at the back while Trent Alexander-Arnold remains a creative force. Liverpool have had results in their favour traditionally in this fixture. However, they know that it cannot be taken for granted especially with Arsenal being in such strong form themselves.

Takehiro Tomiyasu has not played since mid February with a calf injury. He will most likely sit this one out also.

Mo Salah picked up a knock in the win against Brighton and was taken off after scoring. If he is unable to start, one of Diogo Jota or Roberto Firmino should be back.

Martin Odegaard has really upped his game ever since his signing last summer. The former Real Madrid midfielder has developed into one of the most key cogs at Arsenal. Five goals and three assists in the league already, including a man-of-the-match performance against Leicester. Odergaard’s eye for passing and ability to find his teammates consistently have been his strongest assets.

Furthermore, the Norwegian has some nifty tricks up his sleeve that bamboozles defenders. Virjil Van Dijk and Matip will need their midfield to screen them effectively. If Odegaard gets on the ball and charges or slips someone in, there could be real problems for Alisson. Even from set-pieces, he is a big danger so fouls will have to made tactically.

Luis Diaz has been a fantastic addition to Liverpool’s attack. The Colombian has been explosive in all of his games, scoring twice in the league already. What has been the most impressive is how quickly he has take to Klopp’s tactics. Diaz is a very exciting player who loves running at defenders. He has amazing technical skills and a wide range of passing.

Diaz can be the perfect candidate for initiating counter attacks down the right as well. Moreover, his immense energy helps the team to move the ball quickly and overwhelm the opposition. Arsenal’s defence will have to be on high alert in order to not let him run in behind. Cedric is not as quick as Diaz so he will need help in stopping the winger as well.

This fixture has historically favoured Liverpool but the odds are not so stacked this time. Arsenal have grown in stature as the season has gone on and will fancy their chances. FootTheBall predicts a 1-1 draw at the Emirates.