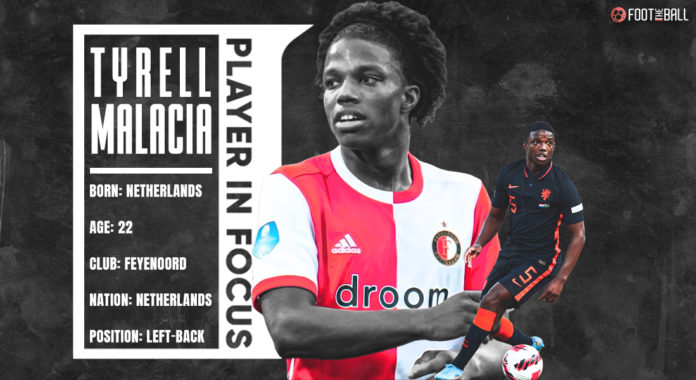 When Manchester United appointed Erik Ten Hag, the club promised a spate of new signings to make the club a top force. With Ten Hag’s years of experience in the Eredivisie, it was expected that Manchester United could sign players from the league. His former team, Ajax, have the best young talent in Europe in the form of Jurrien Timber, Lisandro Martinez, and Edson Alvarez. However, United Have opted for one of Ajax’s top rivals to make their first signing. The club has singed on a €17 million fee Feyenoord’s left-back Tyrell Malacia.

Anyone else in the mood for Malacia? ❤

The Red Devils saw off competition from French side Lyon to sign the youngster. Malacia’s signing will relieve the club’s fans, who have been growing impatient over the lack of signings. The mood has gone so tense that United CEO Richard Arnold met a group of fans planning a protest at a club to reassure them.

So, who is United’s new boy?

Tyrell Malicia is a player who plays with his mind and feet in equal proportions. He has a brilliant vision, and at the same time, he can also be a physical no-nonsense defender. Standing at 1.69 metres, he may not be the tallest person on the field, but his impressive physicality makes him a beast.

In addition, he is also a very smooth passer and can exploit a gap between the opposition; defence. Feyenoord coach Arne Slot prefers a system where the fullbacks are tasked with occupying spaces in midfield. While Malacia is naturally a great defender, playing in such a system has refined his passing too.

The youngster is a crucial part of building up from the back as he aims to occupy the half-spaces between the opposition’s shape.

Nice tactical analysis, showing the worth of Tyrell Malacia. https://t.co/zJoCpqxAux

To add to this, he is blessed with pace. In his team, Malacia is often the progressive passer. He either plays the ball to the left-winger or tries to play the ball into the centre of the field for the creative midfielders.

He struggled in the 2020-21 season under Dick Advocaat, who preferred a more defensive style. But he has had more chances to show his full potential under Slot.

Speaking of top young players, Ajax’s Lisandro Martinez is a coveted man in Europe and these are the clubs where he could go

What makes Malacia unique is his combined capabilities of impressive physicality and impeccable passing. The left-back won 57 tackles in the Eredivisie last season. This ranked him as the fifth-best player in the metric. And on the other hand, he was among the league’s top eight most threatening players. According to the Expected Threat (xT) metric, Malacia was the eight-best player in the league. His ranking improved by one when it came to xT from passing. So, Malacia is a player who can make precise tackles to win the ball and then use his passing to create chances for his team. 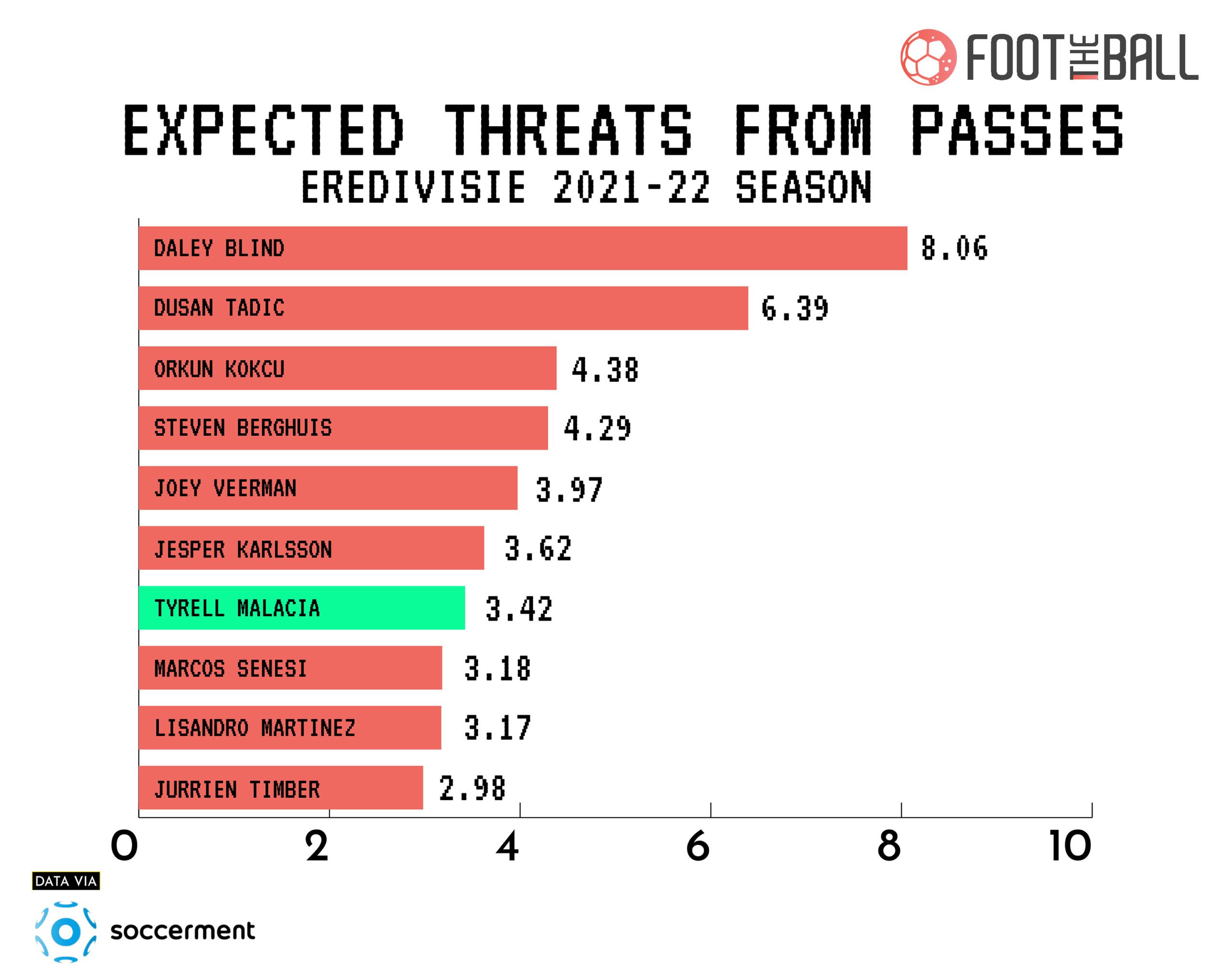 Under Arne Slot, Feyenoord play a system that stresses building up from the back. And Malacia is an integral part of it. Malacia is among the top 20 passers in the league and the fifth-most in the Feyenoord team.

Malacia is also an adept dribbler with a success rate of 66.7 per cent. In addition, he also wins over 50 per cent of his duels, be it on the ground or aerial. The Dutchman also has four assists and one goal to his name. He is also a decent chance creator. He is the seventh-best defender on this metric, with 36 chances created.

Malacia is still young and needs improvement in his game. His passing and crossing could get better. However, his all-around play suggests that Manchester United have landed one of the best young left-backs in Europe. 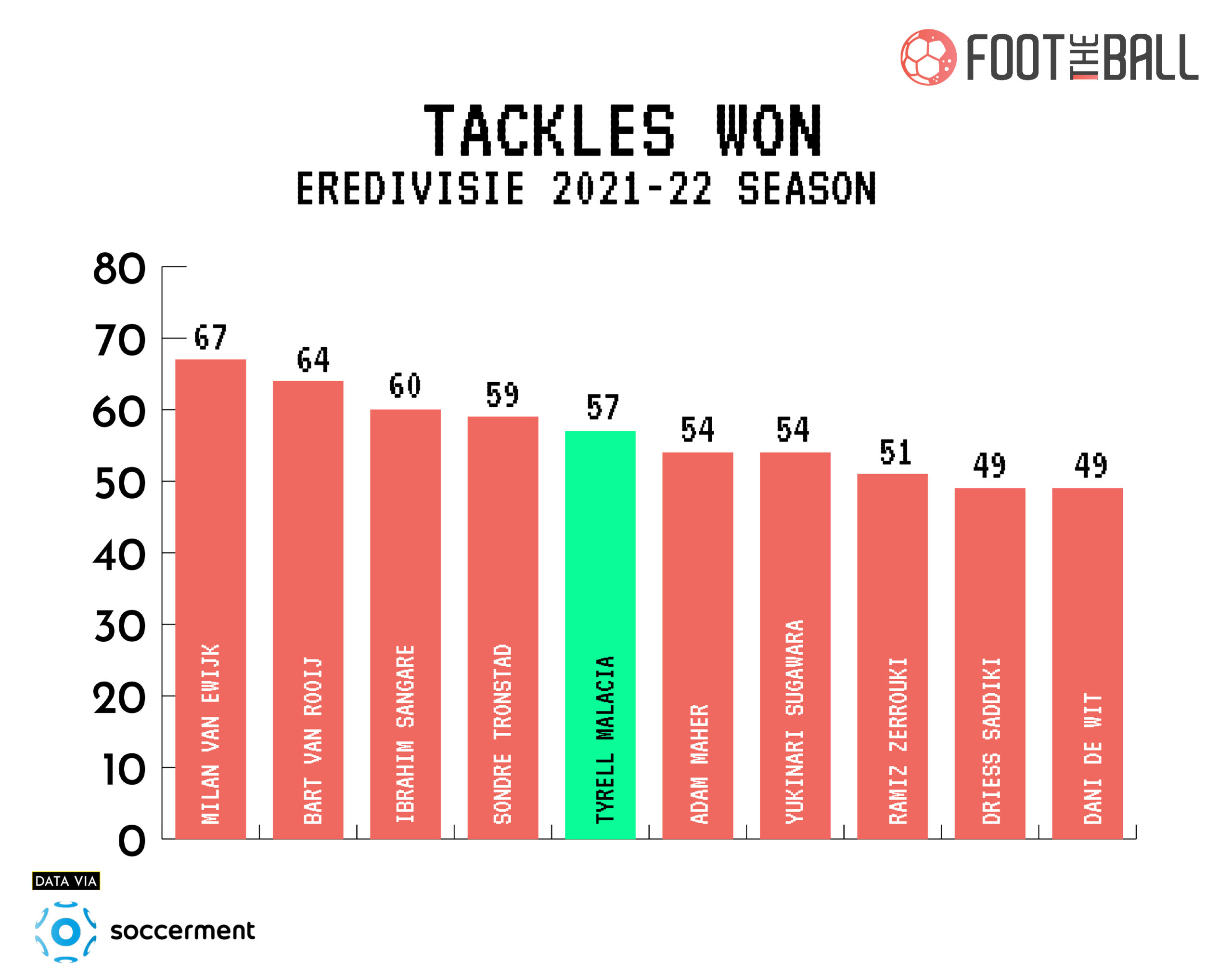 Malacia, like Aaron Wan-Bissaka, is a defensive beast. However, unlike the Manchester United right-back, he is much more composed in the attack. United tried signing Telles last year to provide competition for Shaw but he failed to impress. One of the significant weaknesses of the team in fullbacks is the lack of all-around defenders. Shaw is brilliant in offence but is not the best of defenders, while the opposite is true for Wan-Bissaka.

What Malacia offers is a mix of both. This would help any team he plays change their tactics during a match. His brilliant tackling also makes him a menace for attackers in a counter-attacking situation.

Feyenoord's academy product & talented left back has been heavily linked with Manchester United. I used data and video to analyse his 2021/2022 Eredivisie season.#MUFC #Feyenoord

When Feyenoord attacked, his link-up play with the left-winger proved beneficial for the team. His high xT numbers are also due to Slot’s tactics. The manager is a big fan of making intelligent runs behind the opposition’s defence. This needs clever attackers who can make those runs and great passers who can provide those killer passes.

And in a United team comprising Cristiano Ronaldo, Jadon Sancho, and Marcus Rashford, he could only get better.

Earlier in the summer, French side Olympique Lyonnais were reported to be close to signing him. With many clubs going through a significant rebuild, Lyon would have got a fantastic player if they had managed to conclude the deal. According to reports, the French club offered € 13 million plus €2 million in add-ons.

However, United got ahead after offering more money to the Dutch club. According to media reports, the English club offered €15 million plus €2 million in add-ons. Feyenoord  accepted the offer. Frank Arnesen, Director of Feyenoord, later confirmed the news. Speaking to Dutch publication 1908.nl, he said, “The agreement with Man United is there. We are now waiting for Tyrell”. Tyrell did not wait long and the transfer that only picked up pace less than a week ago is now confirmed.

Tyrell Malacia may not be United’s most eye-catching signing of the transfer window. However, he has the capability of being the most effective one.