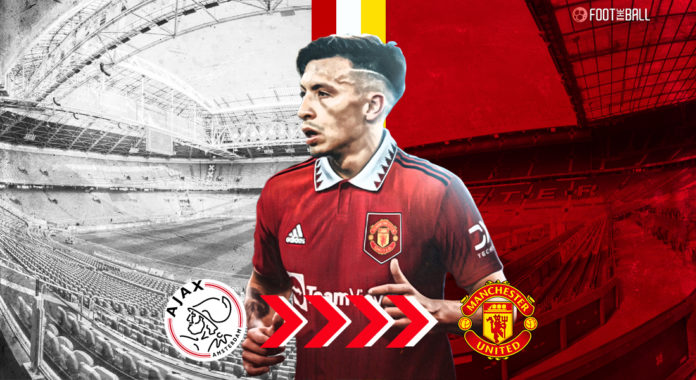 Manchester United are on a roll under Erik ten Hag. Having already brought in Tyrell Malacia, the Red Devils then thrashed Liverpool 4-0 to win the Bangkok Century Cup. However, the icing on the cake came a few days later as the club has now signed one of their key transfer targets.

Lisandro Martinez joins from Ajax for a fee of around €57m+€10m add-ons. Ten Hag had long sought his former protegee, who has developed into one of the best centre-backs in Europe. Moreover, Martinez is also a serial winner with Ajax and lifted the Copa America 2021 with Argentina.

Could this be the move that finally elevates United’s backline? Can Martinez immediately settle down into a starting role in the Premier League? What happens to one of Harry Maguire or Raphael Varane now? FootTheBall takes a closer look at one of the biggest transfers in United’s recent history.

Being left-footed, Martinez formed a formidable partnership with Jurrien Timber. Ajax have dominated teams under Erik ten Hag, and it all starts from the back. Martinez can spray all sorts of passes to his teammates. Therefore, there is hardly any situation which seems to faze the Argentine.

He can wriggle out of tight situations with a low centre of gravity, and his teammates are there to receive the pass. Moreover, Ajax trust him to build play from the back, and Martinez’s numbers are eye-popping. United are getting a solid player who has the right qualities to succeed.

🗣️ "Martínez is very skilled and creative in his passing. The more he has such players, the more Ten Hag can keep the ball and the less he encounters counters."

They struggled mightily in 2021-22, with Harry Maguire having a terrible season. Raphael Varane missed games with injury, but was far from his best self. One of the key problems was that they came under pressure too often, and struggled to play out from the back.

Erik ten Hag is also pushing for Frenkie de Jong, but the saga is dragging on. What next in that big chase?

Martinez solves that issue as his vision is superb for a centre-back. He is looking for the next pass even before receiving the ball, and strikers are often lulled into a false sense of complacency.

However, when they approach him to win the ball, Martinez can slip away. This is evidenced by him completing 83.3% of his dribbles in 2021-22.

One of the best ball-playing centre-backs in Europe, Martinez is always looking to advance the ball. According to FBref, Martinez attempts 87 passes per 90, completing 93% of them. That puts him in the 99th and 95th percentile respectively for similar players across Europe.

Frankly, those are some ridiculous numbers for a central defender, and it gets even better. The 24-year-old makes 7.88 progressive passes (99th percentile) and 6.13 progressive carries (96th percentile) per 90. Therefore, it is clear that Martinez is forward-thinking, no matter the situation.

Moreover, there are situations when he is being charged down. Martinez chooses to carry the ball himself, and get out of the tough situation. Ajax have been one of the most thrilling sides to watch over the years. It is down to how quickly they can transition from defence to attack, in order to attack at breakneck speed.

Martinez makes 3.13 tackles per 90 (99th percentile), which speaks highly of his timing and reading the game. However, his 5’9″ frame means he cannot win a lot of duels (2 per 90), which means his defensive partner has to cover that area.

It is no big secret that Manchester United are on a rebuilding mission. They have a massive warchest, as alluded to by CEO Richard Arnold. Erik ten Hag has a list of preferred targets, and Martinez was high on it.

Ajax know they are a selling club, meaning the transfer was only a matter of time. €55m+ for a 24-year-old centre-back is definitely a reasonable price, keeping in mind what all he brings. Ten Hag knows the player extremely well, and he will most likely become an instant starter.

United need a defensive midfielder. Edson Alvarez fits the bill, and is a Ajax star. Could be next on the club’s wish list?

Therefore, going after a blossoming player made sense. The backline needed major upgrade, and when it was clear that Timber was not coming, United went for Martinez. Ten Hag’s previous relationship with Ajax certainly helped in convincing the Dutch giants to sell.

Lisandro Martínez of Ajax was the player with the most precise passes as he completed 79/81 against Colombia. He also had the most clearances of the Argentina team with 4 of them. This via @DataRef_. pic.twitter.com/lUU48o3SVK

In many ways, they have got a solid deal in the current transfer market. Chelsea paid €40 for 31-year-old Kalidou Koulibaly, with Martinez said to have an bigger ceiling than the Senegalese.

Only time will tell how the transfer value works out, but getting him is a major boost to team preparations.

The most pressing question is whose place will Martinez take? Harry Maguire will remain as captain. Raphael Varane was the big name acquisition in 2021 and is a four-time UEFA Champions League winner. Victor Lindelof will remain as the third-choice option.

So, Martinez coming in would naturally play as the left-footed centre-back. That position had been occupied by Harry Maguire, so will he be benched? But he is the club captain! Varane on the bench?

That would not please the FIFA World Cup winner, with Qatar 2022 coming up. The most likely solution is that there will be splitting of duties amongst the various competitions.

However, another far-fetched though is switching to a back three, but that would mean playing wingbacks. United are not exactly setup for that kind of formation, so it will almost certainly remain a flat back four.