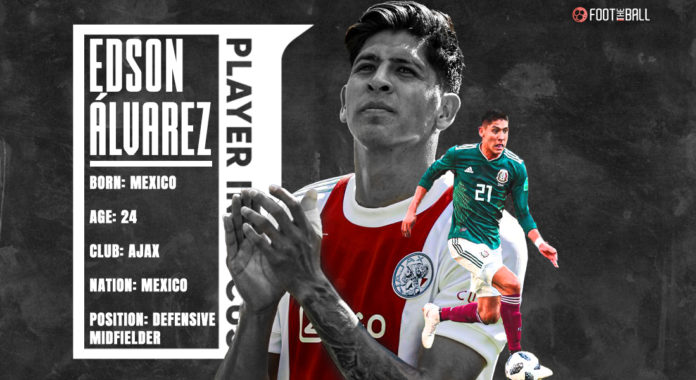 €192 million was what Dutch champions Ajax Amsterdam got after the sale of Matthijs de Ligt, Frenkie de Jong, and Kasper Dolberg in the 2019 summer transfer window. So, even though key players left, Ajax has accumulated massive financial; resources. And so, they began building for the future by buying young talent who could be developed into future stars. One of the players signed in the same transfer window was Edson Alvarez. The then 21-year-old was signed for a meagre €15 million from the Mexican club CF America.

Alongside Edson Alvarez, Ajax also signed Ryan Gravenberch and Lisandro Martinez. These players were seen as the future of the club. Three years later, it is safe to say that Ajax’s gambit on all three players has paid off big time.

Ajax stormed to a record 36th Eredivisie title in 2021-22, and Alvarez played a big part in it. The Mexican played in a double pivot with Gravenberch, which formed the midfield bedrock for Erik Ten Hag.

After a spectacular season, Ajax are again facing the 2019 summer situation. So, will Alvarez find a new club, or will he extend his stay at Ajax? Before we answer this, here is an analysis of Edson Alvarez.

Playing as a defensive midfielder in Ten Hag’s system requires a player to be physical, a hard runner and an accurate passer. Edson Alvarez ticks all the boxes. His heatmap from SofaScore shows that the youngster covers a lot of ground in a match. Alvarez is the shield for his centre-backs, Martinez, and Jurrien Timber.

The Mexican’s main job is to intercept passing lanes and ensure that Ajax are never caught defensively. For his position, Alvarez is fast and can quickly cover lots of ground which helps Ajax maintain their shape. He is like Thomas Muller in the Raumdeuter role but in midfield rather than attack.

Wouldn’t be my first choice, but Edson Alvarez would be a good signing to play next to De Jong, not an amazingly technical player but is reasonably tidy and would allow De Jong to do this thing further forward

What makes him unique is that despite being a defensive beast, he does not tackle that often. Instead, he blocks the passing lanes to intercept or block the ball. However, he does tackle a lot more in the attacking third, where he knows he can disrupt the opposition’s rhythm and escape punishment from the referee.

His defensive insight allows his midfield compatriot Gravenberch to help in the attack. Alvarez goes about his job quietly while the spotlight is on his teammates. This is what makes him a particular player.

Alvarez is a brilliant reader of the game and positions himself defensively according to the situation. According to fbref, Alvarez intercepted 0.32 passes per 90 minutes, among the top one per cent defenders. He also blocks 0.16 passes per 90 minutes, again among the top one per cent defenders. However, he can be the no-nonsense defender, as is evident by his 2.91 clearances in a match, better than 98 per cent of defenders.

The Mexican is also a brilliant passer of the ball. According to Soccerment, he completes 86.4 per cent. Another essential thing to note is that his best passing stats are for medium-range rather than short. This makes him dangerous as an expert medium-range passer playing in the middle of the field; he can be a menace to the opposition.

As the stats show he has more touches, tackles and passes with the % success rate the exact same. He’s more than comfortable on the ball. High energy tenacious player who I think would fit very well.

Here’s how he compares to Edson Alvarez (Ajax’s Dm at the moment): pic.twitter.com/BKFefR1gbA

He also has a success rate in aerial and ground duels of 66.7 per cent and 60.3 per cent, respectively. His 102 aerial wins are second-best in the Ajax squad behind Sebastien Haller. In addition, Soccerment rated him as the third-best player defensively in the league behind Timber and Martinez.

Playing in an Ajax team, Alvarez has transitioned into a fluid player. This, combined with his pace and stamina, makes him an asset. Furthermore, he has played as a defensive midfielder in one of the most attack-minded systems in Europe. It means that he can easily transition his skills to the top teams in Europe who play similarly to Ajax.

Alvarez is also a player who is a great defender due to his mind than body. His excellent vision ensures that he rarely makes silly mistakes. In his three years in the Eredivisie, he has only made two mistakes that led to goals.

In addition, Alvarez has played with some of the best young talents in Europe. These players are wise beyond age and a cut above the Dutch league. It will ensure that he will face less difficulty joining any top European club.

While his attacking play still needs improvement, he is an excellent defensive player with impeccable vision.

After an impressive season, Alvarez was bound to attract attention from other clubs. Leading the race is his former boss’ current club, Manchester United. Erik Ten Hag needs several signings to improve the Red Devils. United were run over by opponents in midfield last season, which led to humiliating defeats.

The transfer window is vital for the team. Fans are agitated and are demanding new players be signed. The situation has become so intense that club CEO Richard Arnold held a meeting with fans planning protests. However, Arnold assured them the club was doing everything to improve the squad.

🥇 l Edson Alvarez can leave Ajax this summer for the right price. Lisandro Martinez, Jurrien Timber and Antony will only leave should Ajax receive a offer which they cant refuse

United can be hopeful as Ajax have already planned for the future, The club which has seen talented players leaves for decades, having turned themselves into a factory that churns out young gifted footballers. Players such as defender Devyne Rensch, and midfielder Kenneth Taylor are ready to step up to the first time.

A player of Edson Alvarez’s calibre is United’s need of the hour. A good defensive midfielder will offer better protection to United’s fragile backline. He can also chip in with goals from midfield that United sorely lacked in the previous season. It will be an exciting summer for him, which will likely take him away from Amsterdam to a new destination.