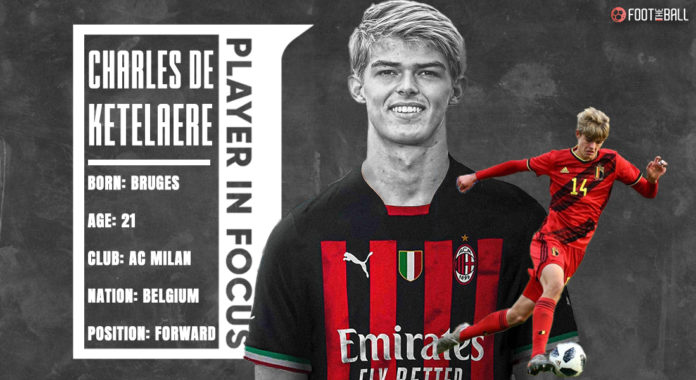 Clubs in Belgium have always been pioneers in developing young talent. It is no surprise that the current crop of Red Devils is termed the ‘Golden Generation.’ The likes of Kevin De Bruyne, Thibaut Courtois, Axel Witsel, and others all had their beginnings in the Belgian first division.

Therefore, it is no surprise that there is a new generation of players ready to take Europe by storm. The best of them, Charles de Ketelaere, was the latest in the line. He moved to Serie A champions, AC Milan.

He formed a terrific partnership with another bright light, Noa Lang last season. De Ketelaere’s performances in 2021-22 attracted plenty of attention. It was inevitable that he would be on the move soon. AC Milan have once again leaned into their new strategy of buying upcoming players by signing a full agreement for the transfer of Charles de Ketelaere.

One of the most impressive things about Charles De Ketelaere is his versatility. Apart from his main striker position, the 19-year-old has played on both flanks and in behind the main forwards. That kind of positional adaptability is a big boon for his prospects. His 6’3″ frame is another bonus.

De Ketelaere uses his tall frame to burst past defenders, making him hard to stop fairly. Moreover, Club Brugge have not been shy to use De Ketelaere as the linkup player, with Lang playing off the shoulder. Thus, they have both bases covered in terms of attacking opponents.

De Ketelaere is also no slouch on the defensive end of things either. According to FBref, he applied 22.14 pressures and made 1.27 tackles per 90 in 2021-22. That put him in the 95th and 91st percentile amongst players in Europe. In a Stefano Pioli team that pressures from the front, de Ketelaere will soon become an invaluable asset.

15 – Charles De Ketelaere (born in 2001) is the only player born after 1/1/2000 able to score already at least 15 goals and to provide at least 15 assists in the Belgian Jupiler Pro League (19 goals and 16 assists in total for him). Diamond. pic.twitter.com/UMC7z5ZSPy

His team can sustain a high level of pressing right from the attackers themselves. De Ketelaere has also been a fruitful presence for Club Brugge on the field.

He recorded a +/- per 90 of (+0.99), meaning the team performed better when he was playing. The same will be even clearer once his stats are looked at in-depth.

14 goals and nine assists in the Belgian top-flight, alongside a further four strikes in the domestic cup. These are just the raw numbers. De Ketelaere certainly had his breakout season, and all his key metrics are great. He averaged 3.45 progressive passes per 90, which placed him in the top 96th percentile.

Also read: Jason Denayer has taken the necessary step up to become a worthy replacement for Vincent Kompany in the national team

Additionally, he also had 8.89 progressive passes received per 90, good enough for the 85th percentile. De Ketelaere is an efficient shooter with a shot on-target percentage of 42.5%. His 14 goals in the First Division A came from just 31 shots on target. As mentioned above, his height helps him win fouls with 56 in 2021-22.

De Ketelaere is also a proficient dribbler, with 54.5% completed, out of 101 attempted (Soccerment). In the same vein, he has also had success in duels, winning 52.1% out of 403 attempted.

Apart from his goal-scoring prowess and advanced position, there are a few things to note. Firstly, things that could be improved. De Ketelaere is woeful at crossing, completing just 21.3% of his 75 attempted crosses (Soccerment).

Therefore, it is clear that he likes to play through the middle, where he can get the ball into his feet. Similarly, a pass success ratio of 74.1% (FBref) will simply not cut it in a top-five league. However, along with the bad comes the good. Apart from the things mentioned above, De Ketelaere has the bonus of playing in the Champions League.

De Ketelaere's developed from a supporting wide attacker into a forward that strains defences from most angles and situations. He runs into depth, slips off blindsides, shoots off dribbles, gets onto crosses – flexible and effective. He's going to go a long way.

Europe’s premier club competition is a dream for players, and 2021-22 was particularly challenging. Club Brugge played against the likes of Manchester City, PSG, and RB Leipzig. Although they were shellacked in four out of six games, De Ketelaere’s performances were rightfully praised.

Belgium had a miracle run at UEFA Euro 1980, which remains their best result in the tournament

His speed and technical ability will be a problem to handle, as he can also help his teammates in attack. Additionally, he has also played for the Belgian senior team, scoring his debut goal in the third-place playoff of the UEFA Nations League in 2021.

A player with eight man-of-the-match awards in one season was bound to generate interest. De Ketelaere was monitored by Leeds United, AC Milan, and a few other clubs. Needless to say, De Ketelaere will not be with Club Brugge for much longer. After rejecting the advances of Leeds United, de Ketelaere moved to AC Milan.

The Serie A champions have made it a habit of buying potential at a low cost under Paolo Maldini. Charles de Ketelaere fits that model perfectly. He has joined a young core of players at Milan. Rafael Leao, Fikayo Tomori, Theo Hernandez, Sandro Tonali and others are coming to their peak collectively. They are ably mentored by experienced heads like Zlatan Ibrahimovic. Therefore, de Ketelaere joins the perfect environment to unlock the next level in his game.

With the 2022 FIFA World Cup in Qatar on the horizon, playing time is a key component. Regular performances and scoring consistency will decide his game time in Qatar. In a young Milan team hungry for more silverware, playing time shouldn’t be an issue for Charles de Ketelaere. A quick adaptation period could be followed by masterful performances. From there, the sky is the limit for the talented Belgian.