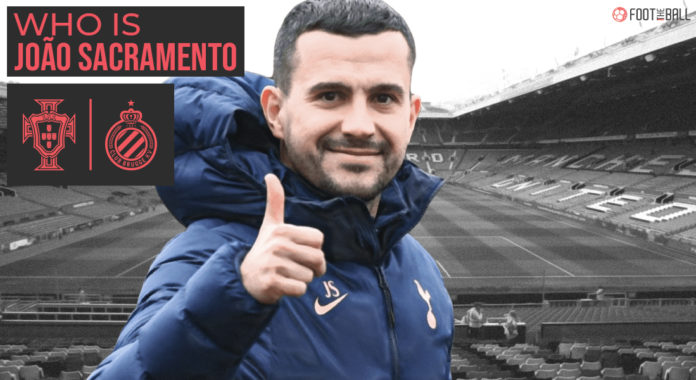 The managerial hire-and-fire season is in full flow. Thomas Tuchel has lost his job in surprising circumstances and Brendan Rodgers looks like he’s sleepwalking to a sacking. Outside of England, French champions PSG did something of a culture reset this summer. The French giants hired Luis Campos as sporting director, whose influence is already evident.

President Nasser Al Khelaifi stated sternly that the time for glitz and glamour is over. In that regard, PSG chose Christophe Galtier as their new manager, over Zinedine Zidane. Another interesting name that has popped up is that of Joao Sacramento, who became the number two to Galtier.

Sacramento is not especially known in France. However, he has made quite a big name for himself in his young career in Europe, where there is considerable excitement. So, who is this mysterious figure, the “Baby Mourinho”, touted as one of the best ‘assistant managers’ in football right now?

Joao Sacramento holds a Master’s Degree in Sports Coaching and Performance from the University of South Wales. He worked as a video analyst extensively, before transitioning into an assistant manager role.

Galtier will be announced in the next days as new PSG manager, João Sacramento will be part of the staff. https://t.co/cuv2Opd791 pic.twitter.com/DpXiWNZWnd

Sacramento was the number two to Claudio Ranieri and Leonardo Jardim at Monaco in the early 2010s. Soon, the 33-year-old linked up with Marcelo Bielsa and Christophe Galtier at Lille in 2017. Moreover, Sacramento was also an interim manager for Les Douges for a brief period of time in 2017-18.

The miracle man of French football! Christophe Galtier is not your average manager, and that bodes well for PSG

Therefore, he has gained extensive knowledge while working with some of the best coaches in the game. Indeed, Sacramento has built a reputation for being extremely adept at understanding tactics and gameplay.

Therefore, it is no surprise that he is being linked to another top job, with a permanent managerial role also in the future.

Jose Mourinho’s appointment as Spurs manager in 2019 came out of the blue. The former Chelsea and Manchester United boss was given the reins after Mauricio Pochettino was sacked. However, there was a new name in Mourinho’s staff after former longtime assistant Rui Faria went to Qatar to scratch his managerial itch.

Mourinho brought in Joao Sacramento as an assistant, giving the latter his first taste of English football. Mourinho’s tenure was less than ideal, and he was sacked in late 2020. Sacramento also left but he had impressed Mourinho. The pair joined forces once again at Roma in the summer of 2021.

Roma had an up-and-down first half of the season, and bigger news came in January 2022. Sacramento announced his departure from Roma, despite having a deal that ran till 2024. At the time, it was felt that Sacramento wanted to take a break before becoming a first-time head coach.

Ligue 1 is not a farmers league, and Joao Sacramento will have his work cut out now

However, that does not seem to be the case at the moment. Sacramento is back in the game with another assistant job, now at PSG. The public scrutiny at PSG is not matched by many clubs and dealing with superstars is a part of life there, something that has been reported as a problem with Joao Sacramento.

How will Joao Sacramento fare?

While he is no doubt a masterful student of the game, Joao Sacramento’s man-management skills are in doubt.

Vitinha is all set to take PSG by storm, and become a key member for club and country

There were issues between him and the Spurs players. Serge Aurier highlighted one such issue. Speaking on why things turned sour under Mourinho, the right-back stated,

“Joao is a tough guy and he didn’t have a good relationship with the dressing room, that’s why everything deteriorated. There was a lack of good communication. It was one of [Sacramento’s] first experiences in a first-team and he lacked calm with the players. He needed to be more concerned about the person behind the player.”

Therefore, it is clear that Sacramento will need to gel with his players better on a personal level.

That is especially essential in PSG, where everyone is a superstar in their own right. The massaging of egos is critical to the success of the team.

Galtier is an expert in turning around a club’s fortunes with this tactical astuteness. He has Campos in behind him, a certified genius in the sporting circle. Sacramento’s mettle will really be tested in such a high-stakes situation, and he will have to pass with flying colours.