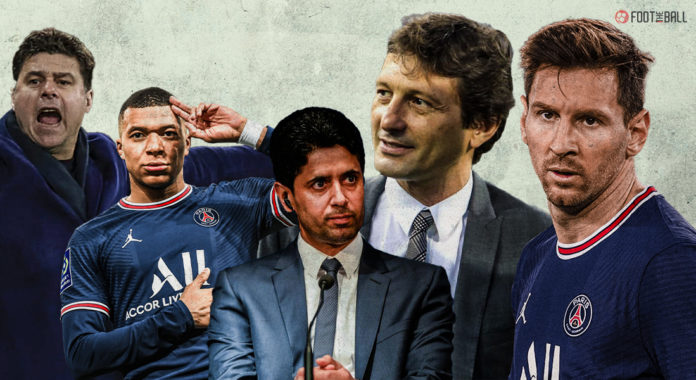 PSG have had a strange season. Mauricio Pochettino and co. won the Ligue 1 title back. It was never in doubt. PSG jumped out to an eight-game win streak and never looked back.

Their rivals were in the mud, with second-place Marseille behind by double digits. PSG’s dominance in France has been evident for a long time now.

However, everything is not as rosy. They lost out in both the French Supercup and Coupe de France. The bitter exit to Real Madrid in the Champions League round-of-16 was extraordinary.

Moreover, off-field issues seem to have taken their toll on the team. Therefore, the recapturing of the league crown will be of little solace.

The future of Kylian Mbappe

The number one issue that was present even before the season started. Real Madrid were said to be aggressively pursuing the superstar attacker. Mbappe has a long-held obsession with joining Los Blancos. Therefore, it was no surprise that Madrid tried to lure him away in 2021. However, PSG stood firm and refused to let Mbappe go. That started an ugly spat between the two sporting directors in Florentino Perez and Leonardo.

As the season wore on, the speculation only intensified. Mbappe refused to be drawn into the debate, even when PSG faced Real Madrid. The club has stressed time and again, that they are deep in negotiations with Mbappe for an extension.

However, nothing final has been done, so all options are open. Nevertheless, this whole circus could have been avoided or even handled in a better manner.

In one of the stories of 2021, Lionel Messi joining PSG was something that either party scarcely could have believed. However, Barcelona’s myriad financial woes meant that the Parisians were the beneficiary party. Or were they?

Messi has not been at his fluid best by a long shot. A constant battle with injuries has slowed him down considerably.

Lionel Messi fires home his 9th, and best, PSG goal to secure the Ligue 1 title this weekend. How many will he get next season?pic.twitter.com/Ciakriqeno

Messi has only scored four goals in Ligue 1 but has managed 13 assists. Those have been necessary for PSG to maintain its momentum from the start. However, one cannot help but feel that this has been an underwhelming season.

Messi still has one year remaining on his contract and he will see it out. Whether that comes as part of the famed front troika remains to be seen.

That night in Madrid

Football is nothing if not a battle of the superior mentality. PSG are unfortunate that theirs seem to desert them at the worst times. Barcelona’s legendary 6-1 remontada is still fresh in the minds of many a supporter.

After 2021-22, they have another one. PSG were cruising at the halfway point of the second leg at the Santiago Bernabeu. They were up 2-0 on aggregate and seemed destined for the quarters. Then came the Karim Benzema show.

A 17-minute hat-trick that completely knocked the wind off the French powerhouse, leaving everyone to wonder what just happened. The players were crestfallen on the pitch, and it marked another dark chapter in the club’s pursuit of the Champions League.

Moreover, the fact that Mauricio Pochettino was linked to the Manchester United managerial job did not help matters. That is a different can of worms.

Poch, to stay or go?

Like Kylian Mbappe, questions surrounding PSG’s manager did not help matters. Pochettino was one of the favorites for the Manchester United job. Before that, it was reported, that he will return to Spurs.

After the debacle in Madrid, it only looked a matter of time before the ax fell on him. Pochettino was on the verge of being fired and replaced by Zinedine Zidane.

Mauricio Pochettino when asked about percentage for his future at Paris Saint-Germain next season: “As of today, I’m 100% staying – and same for Kylian Mbappé”. 🔴🇫🇷 #PSG

The club hierarchy has been huge fans of the former French midfielder, but Zidane remains on sabbatical. So, it looked like PSG had no choice but to carry on with Pochettino. The appointment of Erik ten Hag as Manchester United shut down those rumors.

Pochettino confirmed that he is staying with the Parisians for next season. So, that looks like one problem solved. Whether it is for good or bad, only time will tell.

They have only lost four games and drew a further seven, but the performances have not been great. PSG seem a far cry away from the days of old when they used to steamroll opponents. The fact it is coming after a “fabulous” transfer window of signing Messi, Gianluigi Donnarumma, Achraf Hakimi, and Georginio Wijnaldum is all the more galling.

“It was a wrong choice from Wijnaldum to join PSG and a great choice from Berghuis to join Ajax. And now you can see why making the right choice is so important." pic.twitter.com/Ne1kzlqbdH

Only Hakimi has been performing at a truly world-class level. Donnarumma has had to bide his time, sharing minutes with Keylor Navas. Wijnaldum has failed to nail down a starting spot and is said to be unhappy with his role.

All the rejigged chemistry and outside noise have culminated into lackadaisical performances. PSG drew against Lens (twice), Lorient and Strasbourg.

RC Strasbourg and PSG played out an entertaining 3:3 draw tonight, with Kylian Mbappé in a starring role:

Moreover, they fell to defeats against Rennes, Nice, Nantes, and Monaco. None of those teams had posed a danger to them in the years gone. It is this middling form that saw them crash out of the Coupe de France on penalties to Nice, having failed to score in 120 minutes.

Given all that has gone on related to on-field and off-field matters, it is no surprise that there are problems at the board level. Sporting director Leonardo has come under fire for the haphazard recruitment policy of late.

PSG’s lust for chasing superstars has not helped the club build properly with a rock-solid foundation. That absence has led to a hollow middle, patched up through the brilliance of their attacking trio.

Leonardo tells @SkySport on Pochettino’s future: “Mauricio has one year left on his contract. It’s normal to discuss at the end of the season, what are plans on both sides and more…”. 🚨 #PSG

“It’s been a difficult season but we’re champions now. We’ll discuss and then we see”. pic.twitter.com/NPyHtEeJ8Z

If they fail to show up, there is no help coming from elsewhere. Leonardo has vowed to turn the tide around and stressed that he is still the right man for the job. However, that is not all. There have been slight murmurings that the Qatari ownership group led by Nasser Al-Khelaifi is looking to sell PSG.

QSI tell me the notion they and Nasser Al-Khelaifi want to sell PSG after the 2022 World Cup is ‘fake news’ and ‘embarrassing’. They deny any truth to a forthcoming sale in the strongest possible terms.

While that may be a smokescreen as Qatar readies to host the FIFA World Cup, there is no doubt that patience is running thin. The Champions League title is the holy grail for everyone associated with the club.

There has to be a period before the owners pull the plug on the project. PSG need to roll up the sleeves and start from the ground up. Otherwise, the top of the building will continue to come crashing down.