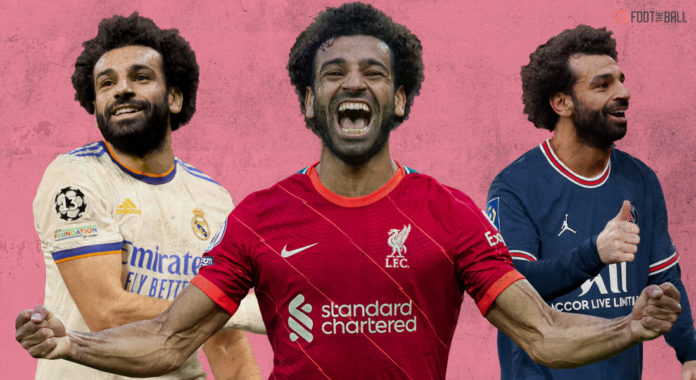 Mo Salah is doing some truly incredible things at the moment. The top scorer in the Premier League in 2021-22, has been one of the world’s best players for a long time. His goals have been worth their weight to Liverpool as they lifted the league and Champions League titles.

Mohamed Salah holding the Premier League trophy. He has become a world superstar since arriving at Anfield. His goals and assists are a huge factor in Liverpool's success. Wonderful signing. pic.twitter.com/vy6z8KFJPI

Salah is deadly during any phase of a match and is capable of the spectacular regularly. That is why the world is watching with great interest what happens with his contract situation. Salah’s present deal with Liverpool ends in 2023 but negotiations over a contract have stalled. There have been major problems regarding wages and the valuation of the player from both sides.

🚨 🗣 “There are many things people do not know about it”

Will it be sorted? “I can't say yes and I can't say no. I have said many times before what I want”

— Mo Salah on the potential renewal of his Liverpool contract.

Salah wants to be one of the highest-paid players in the world. Meanwhile, the Reds under Michael Edwards are known for their extremely careful and not too flashy approach. Though both Jurgen Klopp and Salah have answered in cryptic tones over the possibility of a new contract, the dark clouds loom.

Michael Edwards is set to leave Liverpool soon, and that is bad news. Here’s why

🗣️ "I'm giving everything for the club"

Mohamed Salah says that now is not the time to be selfish and talk about his contract as he focuses on Liverpool's Premier League title run-in 🔴 pic.twitter.com/wGa0VXsxpN

It will not be hard to imagine Salah playing for a different club if no breakthrough is reached in 2022. So, where can Salah end up after Anfield? FootTheBall finds out the most realistic destinations for the Egyptian next summer.

THE HISTORY BEHIND ANFIELD

Any club that wants to make the transfer of Mo Salah happen will need deep pockets. There are few rivals to Los Blancos when it comes to money. Florentino Perez loves his Galacticos and Salah will be a big jewel.

Madrid are going for Kylian Mbappe in 2022 to complete the trio. It is there where Salah can fit in, replacing Karim Benzema on a long-term basis.

Mohamed Salah may consider moving to either Real Madrid or Barcelona in the next transfer window.

Which of the clubs do you think is better for his future? 🤔 pic.twitter.com/g9sBBChnlf

The Frenchman is in spectacular form but his deal also runs out in 2023. If Madrid choose not to renew him, Salah can be an ideal fit.

Karim Benzema is having a career year…once again. Here are his best moments for Real Madrid over the years.

He can play down the right, with Vinicius Jr. down the left and Mbappe through the middle. That will be one of the scariest frontlines in world football and that can become a reality.

Again, a club with almost unlimited money. Salah may not be able to play with Lionel Messi, given the Argentine’s contract ends in 2023. However, Salah will be a perfect replacement for Mbappe if he leaves. Salah, Neymar, and a new striker will wreak havoc in Ligue 1 and can finally conquer Europe.

#PSG are now in pole position to sign Mo #Salah this summer if he leaves #Liverpool, per Sport! pic.twitter.com/Mbrlbq2So2

Salah will be first-choice without a doubt and with Neymar, can combine supremely well. Whether Mauricio Pochettino remains to manage is a big question, given the European performances and new jobs opening up.

The Manchester United job is open so of course Mauricio Pochettino is linked.

PSG are desperate to add the Champions League to their cabinet as the transfer haul in 2021 proved. Though it did not work out in 2021-22, the transfer of Mo Salah will certainly take them closer.

Is the Old Lady getting old for real this time? Juventus have struggled in the first season under the returning Max Allegri.

They are barely clinging on to the fourth spot and were embarrassingly knocked out of the Champions League by Villarreal. Paulo Dybala is set to leave at the end of the season.

Juventus are 'exploring a mega-money deal worth £10m-a-year to try and lure Mohamed Salah to Turin' https://t.co/z8uqOLbcDn

He will most likely be joined by Federico Bernardeschi too. The return of Federico Chiesa will be a big boost and the front three of him, Dusan Vlahovic, and Mo Salah should be given consideration.

They have the money to get the transfer done, and Mo Salah will be an instant upgrade on Juan Cuadrado. Salah’s addition can be just what they need to fight the resurgent Milanese sides and Napoli in the future.

Yes, the Bavarians do not spend exorbitantly on wages. Everyone knows this about any German club. However, their hand might be forced in a way that would have been impossible not too long ago. It has emerged that Robert Lewandowski and the Bavarians are having problems in extending his contract beyond 2023.

His intention is to leave Bayern this summer although he is free in 2023. Barça would offer him a four-year contract.

Moreover, the Polish phenom has been one of the greatest goal-getters of the modern generation. He will not short of suitors anytime soon. So, if the improbable transfer does happen, Mo Salah will be a worthy replacement.

Granted, Salah has not played through the middle too often but the supply of goals is guaranteed when he is on the pitch. Moreover, he can form a really strong relationship with Julian Nagelsmann, one of the best young coaches in world football.

Find out who joins Nagelsmann on the list of the best upcoming coaches.

In short, it will just make the most sense if no transfer for Mo Salah happened. The Egyptian and Liverpool have formed a great relationship. Klopp loves Salah and of course wants him to extend his stay.

Jurgen Klopp has been speaking about Mohamed Salah's form 🔴💪

Does he get on the scoresheet tomorrow? 🤔 pic.twitter.com/DdTMzDNufw

Having become a fixture of the lineup, Salah and Liverpool just feel right. They have the money and can get the deal done, but negotiations will not be easy. Salah has not ruled out staying at Anfield for a long, long time. Therefore, it is time to take out the checkbook and get the necessary deal done.