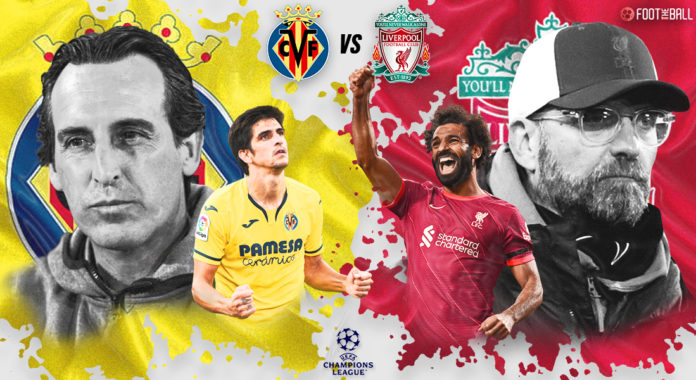 The second leg should only be a formality, right? The first goal at Anfield was unfortunate but the second one should be the dagger.

Villarreal have had a fairytale journey to the Champions League semi-finals. However, the Yellow Submarine have a mountain to climb. Unai Emery and his tactics will have to work an insane amount of magic to overturn the two-goal deficit. The absence of Gerard Moreno was keenly felt because he is Villarreal’s top striker.

A spectacular tifo will be on show at the Estadio de la Cerámica ahead of our last European home match of the season.

Samuel Chukwueze could not have the desired impact. Emery will need to move Giovani Lo Celso to his natural playmaking role. Villarreal will be spurred on by their home crowd, but it will not be an easy affair. They have had a scratchy record in La Liga with Liverpool in an unrelenting mood.

Liverpool hold a commanding 2-0 lead after an own goal and a Sadio Mane strike. Moreover, the Reds rested several starters in their weekend match against Newcastle United. Therefore, supporters will be quietly confident of progressing well. Jurgen Klopp has turned the fortunes of this club, as they’re dreaming of the quadruple.

Next up… our #UCL semi-final second leg 👊🔴 pic.twitter.com/jW4Vu5SrAi

The fearsome frontline is superbly complemented by the majestic midfield and deadly defence. Their continuous pressing and expert movement leave opponents befuddled. Even in matches where Liverpool find the going tough, the players step up to ensure that the win is secured.

This season’s Champions League has already seen several exciting encounters. Though the first leg was one-sided, things could change this time. Villarreal are not known for going out without a bang. Liverpool will have to be on their guard if they are to progress to their third final in five years.

Villarreal are sweating over the fitness of Gerard Moreno. His return will be an instant boost.

Liverpool will welcome back their starters. Klopp will not be complacent in choosing his team.

Despite the possible return of Moreno, it’s the quietness of Arnaut Danjuma that will worry Villarreal. The Dutch attacker was ineffective and on the fringes of the first leg. That needs to change quickly.

Danjuma has been one of Villarreal’s best players because his traits are crucial for the team. His teammates need to supply the ball quicker to Danjuma who will use his pace to get behind Liverpool’s backline.

That will be helped by Giovani Lo Celso moving into a more central role. Liverpool have their weaknesses, but they need to exploit them cleverly. Emery knows that Danjuma and Moreno are a power-packed combo.

Therefore, the attacking nature of Danjuma has to come to the fore if Villarreal are to claw back the deficit.

Moreover, his playmaking skills against Manchester United took everyone by surprise. Moreover, the pass for Liverpool’s second goal was beautiful.

Similarly, Raul Albiol played him onside for the second goal at Anfield, and the veteran centre-back will have a fight on his hands. Mane is extremely wily and quick for defenders, which will be a nightmare for a team already facing an uphill task. Therefore, he needs to be watched better.

The tie is all but over, right? Do Villarreal have one last surprise in them? Can Liverpool put the marker on an even more emphatic win? Therefore, the second leg promises to be a fascinating watch. FootTheBall predicts a 2-0 win for the Reds in Spain.