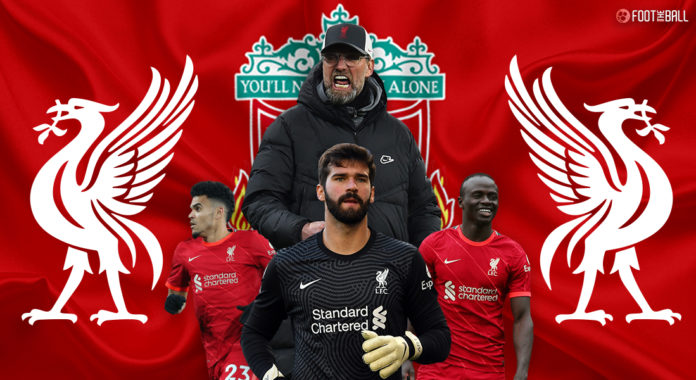 Is it a bird? Is it a plane? No, it’s Liverpool going for the quadruple in 2021-22. Yes, that does not make sense because football is not for the lyrics (not looking at you, Peter Drury). It’s for glory, silverware, passion, and winning.

Jurgen Klopp loves all of those things, and every one of them is extremely infectious. Liverpool have already won the EFL Cup and are through to the final of the FA Cup.

As @Carra23 said earlier this season: Klopp's Liverpool have not won enough trophies to do justice to their 2018- dominance and record-breaking runs. Before 2022, just 1 domestic cup trophy in 16 years. Gives FA Cup & EFL Cup added significance for Klopp/Liverpool.

Moreover, the Reds are level on points with Manchester City for the Premier League title and play Villarreal in the semis of the Champions League. All of this has everybody asking the same question: could the Scousers capture all the four trophies on offer?

Some teams have come close in recent years but fell short. Therefore, it will certainly not be an easy task. However, Liverpool are extremely well-positioned to achieve the quadruple.

How difficult is the quadruple?

In a word: very. In more words: it has been done before. Barcelona under Luis Enrique, Bayern Munich under Jupp Heynckes, and Real Madrid under Zinedine Zidane have all done it over the past decade. To be fair, Pep Guardiola (Barcelona) and Hansi Flick (Bayern Munch) have also won four or more trophies in a single calendar year.

Could Mo Salah really LEAVE Liverpool? Here are the clubs who could sign the mercurial attacker

However, football purists take the four trophies on offer in a single season for the official definition. That is why no English team has managed this feat yet. Manchester United came the closest in their famed 1998-99 season. The Red Devils won the league, FA Cup, and that historic Champions League crown. However, they were knocked out of the League Cup in the quarter-finals.

The second closest were Manchester City in 2018-19. Pep Guardiola’s behemoth team captured all three domestic competitions, with the league finish being one for the ages. Sadly, the Cityzens suffered elimination in the quarterfinal stage of the Champions League. Of course, there have been several times when an English side has won the ‘double.’

Pep Guardiola vs Jurgen Klopp has been the rivalry of this decade. And with good reason.

The quadruple is a different level of beast altogether because of the intensity needed across all four competitions. Therefore, it is no surprise why Liverpool’s multi-pronged challenge has been heralded as historic. They are showing no signs of slowing down and with good reason.

Can they do it?

In a word: yes. In more words: they have a great chance. Liverpool are level on points with Manchester City for the league. They will start as favorites in the FA Cup final as well as in their tie against Villarreal.

All members of their front four have been in superlative goal-scoring form. Mo Salah leads the Premier League Golden Boot chart and is having a wonderful season. Diogo Jota and Sadio Mane are second and fifth respectively.

🔥@LFC's front 4 have been on fire this season! pic.twitter.com/u6LbzUPGV4

In the assists chart, three players from Liverpool hold the top positions. Trent Alexander-Arnold has taken his gameplay up a couple of notches while Andy Robertson has been matching stride for stride.

Thiago has started showing his old form of late with Fabinho also getting in amongst the goals. The two pillars of the backline, Virgil van Dijk and Joel Matip have brilliantly anchored the second-best defence in the league.

Liverpool’s centre backs won 7 of their 8 aerial duels against Brighton:

Ibrahima Konate is a superb deputy for the two, taking his chances superbly. However, the most important new addition has been Luis Diaz. The Colombian speedster has injected some serious flair and charisma into Liverpool’s attack.

It is clear how much Klopp trusts him with Diaz starting matches often, something the manager has never done so quickly with new players.

Klopp on Diaz: "I’m not sure I ever saw anybody like that. I said before, he cannot stop smiling in training. It’s crazy. The rest, how quick he will adapt, I didn’t know that either. Luis is now here for more than two months, and it’s rare to see how much he enjoys training." pic.twitter.com/8Oeb36Uok5

Their pressing sequence is one of the best in the world. However, the most remarkable fact has been how amazingly Liverpool have been performing in all four competitions. It will be a true testament to their mentality and grit if they can somehow achieve the impossible. Liverpool have never been this close to a quadruple.

Let’s get one thing clear: failing to win the quadruple is never a failure. Liverpool already have one trophy in the bag, with a great chance of making it at least two. The league is also up for grabs. The Champions League will surely be the biggest stumbling block. Can Liverpool get past Villarreal and defeat one of Manchester City or Real Madrid? Only time will tell.

They cannot, can they? Will Villarreal really be able to spring a surprise and knock out Liverpool? The Yellow Submarine has downed illustrious opponents already

Sadio Mane believes the current Liverpool side are indeed capable of the quadruple but understands it will not be a simple task 🏆🏆🏆🏆 pic.twitter.com/1Krb79wbJR

Meanwhile, Klopp has been adamant in not letting his players or the fans get too ahead of themselves. Therefore, one can expect Liverpool to keep playing as they have done regularly without the quadruple fazing them.