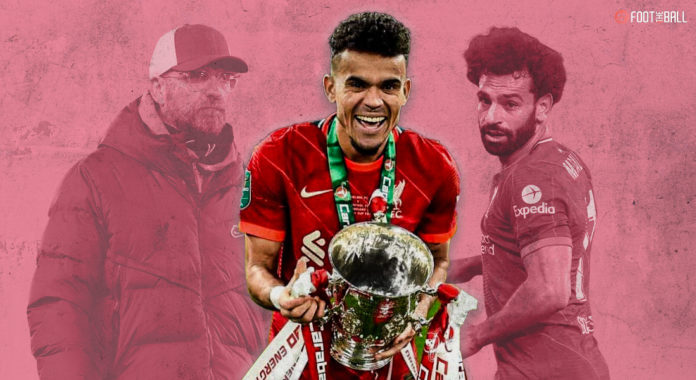 Liverpool have long been one of the title favourites in recent years. Their front three have been on fire ever since being assembled. Sadio Mane, Mo Salah, and Roberto Firmino will go down as one of the best-ever trios. However, the thoughts within the club and fans have inevitably turned to their successors. Jurgen Klopp pulled off a masterstroke by signing Diojo Jota from Wolves in 2020. The Portuguese has scored 30 goals already, and been a huge hit. With Firmino and Mane missing at various points this time, Jota has transitioned seamlessly. Now it seems like Klopp has the second piece in Luis Diaz.

Luis Diaz has directly contributed to 24 goals in 38 games so far this season:

The former Porto winger was tracked heavily by both the Reds and Spurs in January. However, it was Liverpool who eventually got him and what a signing he has turned out to be. Having already made waves in Portugal, Diaz has adapted to the Premier League superbly. In such a short span of time, he has established himself as a regular starter. Even Klopp, famed for easing players in, has had to ride the hot form of Diaz.

Liverpool are also in the market for Fabio Carvalho to complete the next-gen attacking trio. The Fulham youngster will be a free agent at the end of the current season and the Reds are in pole position to land him. They tried to towards the end of January but were unsuccessful. Nevertheless, it seems only a matter of time before he joins. However, all the talk at Anfield currently is about the new sensation from Colombia.

From Porto with pace

There are two key things to know about Luis Diaz right off the bat. He loves pace and he loves his skills. Diaz scored 14 times and assisted four times in the Primeira Liga last season. He had a shots on-target (SoT) percentage of 41.9 and took 3.74 attempts per 90. Most of Diaz’s good work comes when he is on the ball and charging at defenders. Coming from South America does indeed have its perks.

Diaz is a fan of showing his skills whenever he has the chance that makes his markers nervous. No defender likes a wily, slippery player to skip past you. That is why Diaz is such an instrumental asset, coming at players rapidly with the ball and getting into dangerous positions. There were questions as to how much game time Diaz will get, given the presence of Mane already. However, his consistent performances have said otherwise.

There are several ways to describe Luis Diaz’s gameplay. Filthy, wow, proper baller, showboat are just some of them. Over the past year, Diaz has completed 2.84 dribbles and has had 7.15 touches per 90 in the opponent’s penalty box. That places him in the top 93 percentile of players in his position across Europe.

A special team move finished off in style 😍

Luis Diaz’s first goal for the Reds has won Goal of the Month for February 👏 pic.twitter.com/iM9LoqoE0N

The excitement that Diaz injects within the team has been palpable. He has already gotten involved with 28 shot-creating actions in just five matches. Liverpool have benefitted massively from his energetic play and he has already developed into a key asset. Therefore, it makes sense for Klopp to persist with him in the near future. In the match against Brighton, apart from scoring bravely, Diaz was a constant menace.

He switched freely with Mane and helped Andy Robertson by doing his defensive work diligently. Onlookers have rightly praised the perfect fit that Liverpool have been able to sign. Their scouting department has been really good at spotting such gems, first with Jota, and now Diaz.

What does the future hold?

Granted, it is a very small sample size but Luis Diaz has been making all the right noises. His performance against Chelsea in the Carabao Cup final had people raving about him. The poise, close control, and willingness to make an impact. All are great indicators of how well Diaz can develop in the coming years. Liverpool will be needing him at his peak level during the final leg of the season.

Moreover, he can also supplant Salah after 2023. The Egyptian is in a deadlock with the club over a new contract. If the owners do not wanna pay up, they have a replacement ready. With Carvalho also a strong possibility to join soon, the new front three could well replicate the successes of the ageing core soon.