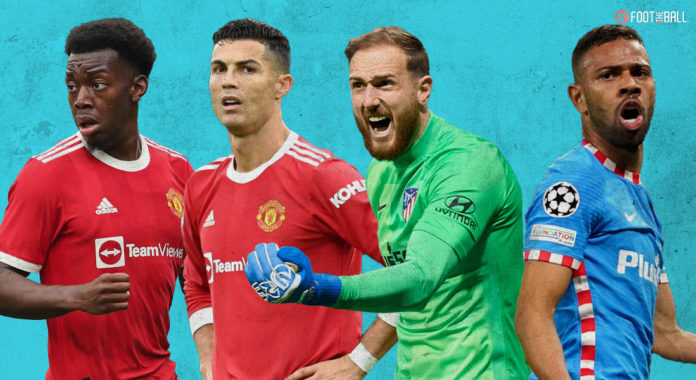 Manchester United crashed out of the Champions League in the Round of 16 as Atletico Madrid defeated them 1-0 at Old Trafford to take the tie 2-1 on aggregate.

The Reds bow out of the #UCL#MUFC

The home side looked up for the contest from kick-off pressing well and making some sharp movements. Anthony Elanga, playing through the centre in the opening stages with Ronaldo out right, looked particularly dangerous. The youngster got on the end of a Diogo Dalot cross in the third minute but his loopy header went wide.

10 minutes later, Elanga should have opened the scoring. After some good movement down the right wing, Bruno Fernandes crossed for the Dutchman who tapped it goalwards from inside the six-yard box. His shot though was unwittingly blocked by Jan Oblak and his face, giving Atletico an early reprieve.

▪️ @AnthonyElanga was denied by Oblak early on
▪️ @D_DeGea did well to keep out de Paul's attempt#MUFC | #UCL pic.twitter.com/v0uC8oZrSI

That served as a wake-up call for Diego Simeone’s side. A few minutes later Rodrigo de Paul unleashed a wicked curling effort from range but David de Gea went flying to his right and got a strong hand to tip it away. Another impressive save in what has been an outstanding shot-stopping campaign from the Spaniard.

United continued to dominate though, and were playing some attractive football. Fred pulled out a neat skilful turn in the left channel, Dalot had a shot straight at Oblak after some great interplay and Bruno had a penalty shout waved away.

Atletico responded in kind. They thought they had taken the lead after an exquisite through ball from Koke found Marcos Llorente in acres of space in their right hand channel. The Spaniard crossed for Joao Felix to tap it in but the flag went up for the first pass from Koke. Replays showed that it was a very tight call.

📸 Renan Lodi heads in opener to put Atlético ahead on aggregate ⚽️#UCL pic.twitter.com/bSnsfxKcIl

The flag would not save United again in the 41st minute as Atletico took the lead through Renan Lodi. Felix and Griezmann neatly exchanged passes in midfield before the latter was released down the right channel. His cross to the back-post found Lodi completely free and the left-back made no mistake in heading the ball past de Gea.

Ralf Rangnick’s men tried to respond and Bruno’s swerving shot needed saving in first half injury time but Atletico went into the interval with one foot in the quarterfinals.

Ahead at the break 💪 pic.twitter.com/fco2TbMMvj

The second half started the same way as the first, with Elanga going close to scoring. Dalot played a lofted pass down the line for Bruno who back-heeled a nice pass into Elanga’s path. The Dutchman drove inside and fired a shot just wide of Oblak’s far post.

De Paul also had another shot saved by de Gea, although this one was much more comfortable. Manchester United had a golden chance to equalise on the hour mark when Dalot’s cross found Jadon Sancho at the far post. Sancho went for the emphatic powerful finish with the instep on the volley rather than the controlled side foot and saw his attempt fly wide.

United continue to knock on the door with Bruno’s free kick from the left just evading Ronaldo’s head. Rangnick decided to roll the dice in the 66th minute, making a triple change with Nemanja Matic, Paul Pogba and Marcus Rashford coming on for McTominay, Bruno and Elanga.

It was Raphael Varane’s chance to go close, his header from a free kick requiring an outstanding save from Oblak. Ronaldo tried an acrobatic shot on the rebound but Oblak comfortably lapped it up. Dalot was next, firing a shot from range wide with eight minutes left in normal time.

United pressed for the equaliser but were unable to get any momentum going. A stop-start last 10 minutes saw Atletico comfortably see out the 1-0 win, as they have done many times before. Here are our key talking points form the match –

Much has been made of Man United’s midfield woes this season but Fred has shown that irrespective of the changes in the summer, he deserves a place in the club. The Brazilian turned in another great performance against Atletico even though it was in a losing cause.

Fred was energetic, making some great runs into the box, and also showcased his technical skill. He has been exceptional under Rangnick and United have one spot in their midfield filled for next season.

Oblak rolls back the months

Jan Oblak had been one of, if not the best goalkeeper in Europe the past couple of seasons but the 2021-22 campaign has seen his performances drop off a bit. He has underperformed his post shot xG substantially but he was at the top of his game at Old Trafford.

His first save might have been fortunate but he dictated his defence superbly, took command of his box and made crucial saves from Bruno and Varane. A vintage performance from a very good goalkeeper.

Tuesday night was a classic Simeone Atletico masterclass. They were defensively disciplined, sharp in attack and took their chances when they came. Despite their struggles in La Liga this season, Simeone once again fine tuned his 1-0 machine just right to secure progression.

If they can keep this performance up, they could be one of the favourites for the trophy in a topsy-turvy season.