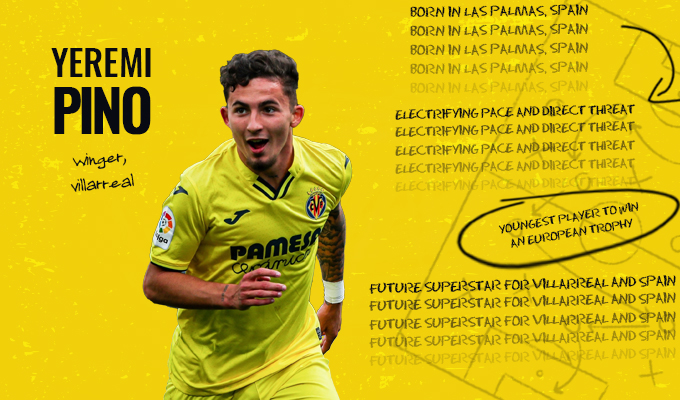 Spain have had a long history of producing excellent young talent who go on to become future stars. The national team under Luis Enrique currently is embracing a youth revolution with Pedri, Gavi, Ansu Fati, and others. The next line is already coming with Pablo Torre, Alberto Moleiro and more.

Most of them have been exciting attackers or midfielders playing for the biggest clubs across Europe. However, there is a player who has caught the eye for his exploits with a lesser known powerhouse.

18 years of age. Another pearl from Villarreal youth academy. What a start to his professional career! pic.twitter.com/3lmqmOzRtp

The player who became the first in his club’s history to score four goals in a league match and the youngest to score three times in the first half itself. That player is none other than 19-year-old winger Yeremy Pino of Villarreal, who is primed to become a mainstay for club and country over the coming years.

His explosive gameplay and ability to affect games has all the signs of him being a world-class winger who can contribute to goals immensely.

The class of 2002 is truly something special with Ryan Gravenberch, Hugo Ekitike, Lucien Agoume and many others being born in the same year. Pino started his footballing journey with local side Barrio Atlantico CF before joining fifth-tier side AD Huracan in 2011. Having spent three years there, Pino made the move to Las Palmas’ youth academy till 2017.

In 2017, Pino would join Villarreal’s youth setup after rejecting an offer from Barcelona. He made his first senior appearance for Villarreal C in August, 2019 in the former fourth-tier. By this time, Pino was an established member of the Spain U16s and U18s, making a combined 23 appearances and being captain for the latter in 2018.

He would score three times in 20 matches for Villarreal C in 2019-20, and after impressing first-team manager Unai Emery during pre-season before the new season, it was clear that his promotion was imminent. Pino would eventually make his debut in October 2020 in a Europa League match against Sivasspor.

This would be followed up by his La Liga debut just three days later against Cadiz. Pino’s first goal for Villarreal came that same month against Qarabag in Europe, and he would reaffirm his commitment to the club by signing a new deal.

Pino would be a regular feature off the bench throughout the season, making 24 appearances while scoring three times and assisting once. The Yellow Submarines lifted their first major trophy in club history last year and Pino assumed an even greater role in 2021-22, which is justly deserved.

Pino’s goal contributions have gone up significantly with six goals and four assists in the league last season. His primary position is on the right flank, a proper winger who runs up and down. Pino is fundamentally attack minded, charging at defenders with the ball and putting them under pressure.

He is averaging 1.71 dribbles completed per 90 with almost 80% passing accuracy and it is important to remember that he is a recent top-flight player. Pino’s passing success rate shoots up beyond 85% over short and medium distances, showing how well he can find teammates. The winger has been involved in over 60 shot-creating actions over the past two years, on an average of 2.62 per 90.

Furthermore, he has also been part of 10 goal-creating actions so far in 2021-22, and that number is only set to increase with time. The most important thing with Pino is how he is always willing to have the ball and how hard he is willing to work without it. Villarreal set up in a conventional 4-4-2, meaning if the wide attackers can get into shooting areas, they can either take the chance or find better positioned players. Pino has had 12 out of his 22 shots on target, taking 1.45 per 90.

He is certainly not shy of shooting, but has been a bit prone to being selfish at times with his others in better position, a trait that will be worked upon in the near future. His excitement and bubbly energy galvanises the team around him and in certain matches, that is very crucial indeed.

Pino’s explosive nature and quick bursts of speed is his greatest asset.. His physicality needs improving, and there is also a propensity to go down a bit too easily. No doubt these are things that will be worked upon.

Emery is an extremely experienced manager who has handled several youth players over the years. The team looks to find Pino at most opportunities so that the transition goes faster as the outlet. Another interesting thing about Pino is he has played through a central role as well. That helps in developing his all-round game too.

The fact that he has been playing in more than one position at such an early stage in his career bodes well. Moreover, Pino can also be an impact player off the bench to run defences ragged towards the latter stages of matches. Especially when team needs goals.

The impact of Pino has increased substantially since he became a regular part of the lineup. His offensive impact has been a big part of why Villarreal were in contention for a Champions League spot. The chart below clearly shows his progress in a short period of time.

Pino ranked in the top-10 for certain key parameters amongst players of La Liga including SoT% (6th), GCA (10th) and GCA/90 (8th). Pino’s defensive work has also been highlighted by onlookers and for good reason. According to FBREF, Pino made 2.11 tackles, 1.37 interceptions and 2.70 blocks per 90. These stats fall in the top 93, 81 and 99 percentile of players in similar positions across Europe over the past one year.

Still only 19, Pino knows that he can improve these numbers over the coming years easily. For a club that has had a notoriously difficult time of keeping ahold of their star players in the past.

The biggest sign of Pino and Villarreal being extremely happy with each other was given another sign of approval. The winger signed a six-year contract to stay with The Yellow Submarines till 2027. This means that any club trying to prise him away will have to pay a mammoth price.

Pino’s national team prospecsts are also looking bright under Enrique. He has made four appearances and is a good bet for the World Cup squad. He has the qualities that can make a good player truly great with time.