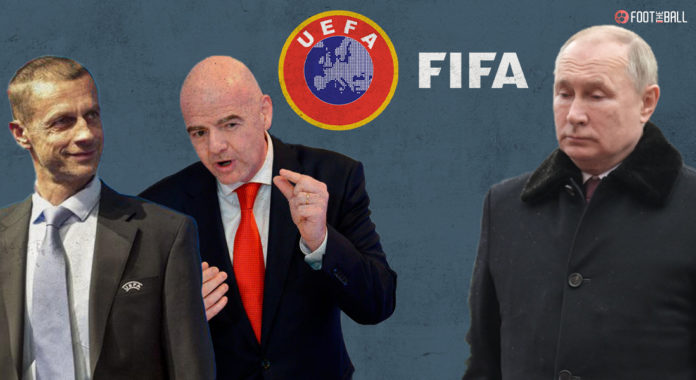 The Russian invasion of Ukraine has elicited a wide range of responses from the footballing community. While players, managers, clubs have pleaded for peace and solidarity, there have also been calls for the two of the biggest governing bodies to step in urgently. After a weak statement from Gianni Infantino failed to convey much or convince anyone of FIFA’s seriousness, it was the Polish football federation that swung into action.

Due to face Russia in a World Cup playoff match in March, Poland and several of its players categorically stated that they will not entertain the thought of playing under the present circumstances under any condition.

It was the first case of a football team/nation refusing to play and it set in motion a whole cascade of follow up actions.

The 2022 World Cup is just 10 months away which seems like a really long time currently. After being jolted into action by Poland, FIFA has canceled the first round of the playoffs involving them and the Russians.

Poland, Czech Republic and Sweden, Russia's opponents in Path B of the 2022 World Cup qualifiers, have all confirmed they will refuse to play against the nation, regardless of the location pic.twitter.com/64oVgLg3mR

The Polish federation was soon joined by Sweden and Czech Republic, in condemning Russia and underlining the same position of not playing, even at a neutral site. This is important since one of those two nations is going to be the opponent of Poland vs Russia in the second round.

FIFA is engaged in high-level talks with all three federations in order to determine the best possible course of action as soon as possible.

The @FA confirms England will not face Russia at any level in international football, following Russia’s invasion of #Ukraine: pic.twitter.com/LQ59lAPxha

The England FA released a statement saying they will not be playing against Russia, at any age level or in any competition until the country stops its aggression against Ukraine.

The worldwide players union has been emphatic in condemning Russia since the start of the invasion, and released a second statement calling for the immediate suspension of the Russian FA.

FIFPRO calls for suspension of the Russian Football Union. pic.twitter.com/xbq9W6Tvyr

What it means is that the Russian football leagues will be stopped with immediate effect, including the termination of foreign players’ contracts without penalties so that they could return back to their homelands. Furthermore, FIFPRO has been engaged with evacuation work of footballers from Ukraine to neighboring countries until the situation improves.

We are relieved that the footballers, along with close family and friends, are now safe in Romania and on their way home. pic.twitter.com/Gmqju9MWCR

The snowball effect continued with UEFA getting in on the act. After moving the final of this season’s Champions League from St. Petersburg, it announced its latest big measure.

"We are forced to obey a decision that we do not agree with."

Spartak Moscow have responded to being excluded from the UEFA Europa League. pic.twitter.com/iD0d8OderT

Spartak Moscow, slated to face RB Leipzig in the Europa League round-of-16, have been disqualified from the competition. This means the Germans are automatically through to the quarter-finals.

No tournaments for Russia

In the strongest measures as of yet, both FIFA and UEFA announced that the Russian national team nor Russian clubs will be allowed to participate in any competition mandated under these two governing bodies.

The means, as it currently stands, Russia are not going to participate at the World Cup in December, and with their playoff fixtures also in severe doubt.  It’s a steep fall from the highs of 2018 when Russia were the hosts themselves but such have been the current times.

Another interesting thing to watch out for is the same punishment of exclusion has been handed out to Belarus as well. Russia is using them as a launchpad for their attacks into Ukraine.

BREAKING: FIFA and UEFA suspended all Russian teams from sports events including the World Cup.

The IOC also asked sports federations to ban Russian and Belarusian athletes, saying it is unfair to compete while Ukrainian athletes cannot "because of the attack on their country." pic.twitter.com/xc46idTjiV

It is important to note that FIFA and UEFA are not alone in announcing such sanctions. The International Olympic Committee (IOC) had pushed for sporting bodies to exclude Russians from all such activities. FIFA’s initial decision of having Russia play without its national flag, banner and country name satisfied few.

There’s a clear and urgent plan of excommunicating Russia from global events so that Vladimir Putin feels the pressure of loss and maybe reverse its horrific decision of war.