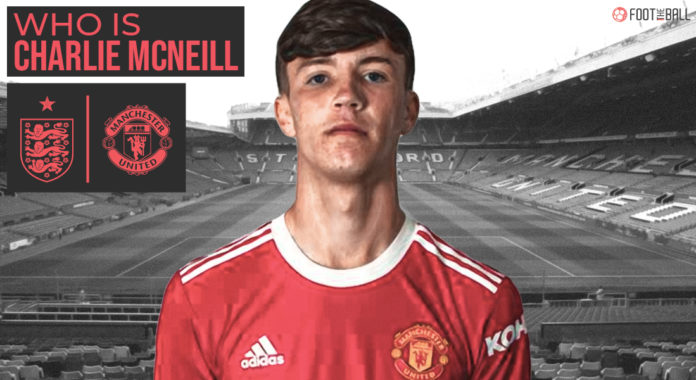 In the climate of modern football, it is a dangerous habit to hype players as the next big thing, with most teenage starlets being compared to a world-class counterpart for simply playing in a similar position.

Manchester United are rich with youthful prospects set to dominate their first team in years to come. The likes of Hannibal Mejbri and Alejandro Garnacho have already made an impact on the first team. Furthermore, exciting prospects like Kobbie Mainoo and Toby Collyer are ready behind them in the production line. But it’s always the guy who scores the goals who gets the major plaudits. That’s what Charlie McNeill has been doing. Here’s a look at the kid who crossed the Manchester divide with an insatiable thirst for goals as he made his first-team debut for the Red Devils.

Who is Charlie McNeill?

McNeill has forged his reputation at youth level as a lethal goalscorer, netting over 600 across all levels by this time last year, but it is his overall play that really catches the eye.

A £750,000 signing from crosstown rivals Manchester City, who will be kicking themselves for losing another top talent after Jadon Sancho, McNeill has turned heads at Old Trafford. In 2018, he inked a six-year deal with Adidas that could net him over £1 million. And in his first season with United, he crashed in an astonishing 24 goals in 21 appearances in the Under-18 Premier League, settling in better than anyone could have hoped.

Astonishingly, McNeill has bounced between the Manchester clubs a few times. He was originally part of United’s academy and played alongside Mason Greenwood.

Having made his debut for the U23s in February, it was only a matter of time before he made a place in that side his own. Sure enough, it happened quickly. From there, manager Erik ten Hag is renowned for giving youngsters a chance. With Manchester United lacking in the striker department, McNeill finally got an opportunity as he made his first team bow against Real Sociedad in the Europa League. First of many?

In an era when professional footballers are media-trained and often speak like robots, it’s great to see a player with a bit of character and personality – and he often shows that in his post-match interviews.

McNeill finished his debut season with 25 goals in 25 appearances and has carried the impressive form into the recent campaign. He was instrumental in United’s historic FA Youth Cup victory, scoring five and assisting two goals in six games.

In the EFL Trophy this season, McNeill held his own against Carlisle United, scoring and assisting a goal each as United’s youngsters defeated a men’s side.

McNeill has forged his reputation at youth level as a lethal goalscorer, netting over 600 across all levels by this time last year. However, it was his overall play that really caught the eye. Although he is driven to score goals, McNeill never stops running on the football pitch. In modern, gegenpressing football, where teams are expected to defend from the front, McNeill is a manager’s dream.

Besides, McNeill has every right to have confidence given his goalscoring record, and though he has been known to play slightly deeper at times, he is very much an old-fashioned number nine who has displayed a variety of finishes with both feet during his first season back at United.

He has an innate sense of space on the pitch. This anticipation allows him to score “dirty” goals, as in, the tap-ins and deflections when the ball falls in the box.

RB Leipzig were heavily linked with signing the teenager from Man City, but it was United who won the race, paying an initial £750,000 to bring McNeill back to the club in September, with the move made official two days after his 17th birthday.

That fee could rise to as much as £1.5m if certain incentives are met, and given some of them are linked with him making the leap to the first team, sources at the club believe they have got themselves a potential bargain.

The pathway is clearly there to United’s first-team. Now with a senior appearance and a manager who trusts youth, McNeill will feel he made the right choice by swapping back to the red side of Manchester. United are reaping the benefits of that decision, with a superstar striker of the future now back in their grasp and thriving. United are historically renowned as the bad guys of English football and a blossoming star like McNeill will help keep up their image of pantomime villains.