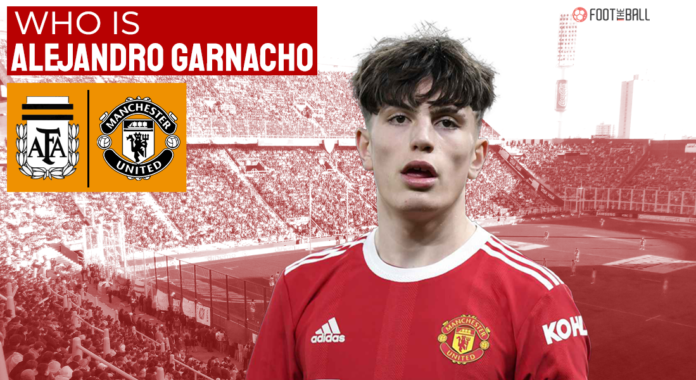 Manchester United have been well-known in developing young talent over the years. The Class of ’92 helped Sir Alex Ferguson win multiple pieces of silverware. Currently, their academy is stacked with talent with the likes of Hannibal Mejbri, D’Mani Mellor, and Charlie McNeil and most recently, Toby Collyer. However, the name most on the lips of fans this season has been Alejandro Garnacho.

The 18-year-old rapidly rose through the ranks last season and became a regular for the U23s. Garnacho was even rewarded for his strong performances with his first senior call-up to the Argentine national team. Moreover, he made his Premier League debut in the 1-1 draw at Old Trafford, playing the final few minutes. Now, the former Atletico Madrid player is all set to stake a claim for a first-team place. Garnacho has impressed this pre-season and after a ringing endorsement from Erik ten Hag, looks set to fight for a place in the team this season.

Who is Alejandro Garnacho?

The name might not have been too familiar with the supporters before this season but that is a thing of the past. Alejandro Garnacho came through the youth system at Atletico Madrid which is another renowned academy. He was playing for Infantil B and became the top scorer for the Spain junior team in 2016.

Garnacho made his U19 debut at the age of 15 during the 2019-20 season. He put in strong performances throughout the campiagn and Atletico were really excited.

Unfortunately for them, so were many clubs in Europe. Manchester United won the hotly contested race to sign him and Garnacho did not disappoint. He had seven goals and four assists with the U18s in his debut season of 2020-21.

The potential of Alejandro Garnacho

Needless to say, the sky is the ceiling for Garnacho. He has been tearing it up for the U18s along with making the step up to the U23s. Alejandro Garnacho has already had several impactful contributions, including playing a decisive role in the FA Youth Cup. United won the competition last year after 11 years and Garnacho played a key role along with other wonderkids, like Kobbie Mainoo.

The excitement around Garnacho was already bubbling beneath the surface. THe FA Youth Cup win and his performances ensured that it was no overflowing. Though he is far from establishing himself in the senior setup, the temptation to play him will only increase. Anthony Elanga has shown how youngsters can adapt to the pace of the Premier League.

No doubt, Garnacho will be hoping to emulate the same path and break into the team soon. The path has never been clearer for Garnacho with a threadbare attack combined with Garnacho’s versatility.

15 goals and six assists in 32 appearances in different age groups saw Garnacho become the academy’s top scorer in 2021-22. He scored four times and assisted once in Premier League 2 from 12 appearances. Moreover, it is not only the number of goal contributions but how they are coming.

Alejandro Garnacho in the FA Youth Cup this season:

vs Scunthorpe ⚽️🅰️
vs Reading 🅰️
vs Everton ⚽️🅰️
vs Leicester City ⚽️⚽️
vs Wolves ⚽️

The new Argentinian international is a huge talent. 🔴🇦🇷 pic.twitter.com/vz12fY7qXM

Alejandro Garnacho has been excelling in a number of areas that have onlookers giddy with excitement. He has scored from set-pieces, mesmerizing solo runs, thunderous strikes from distance and more. He is the true definition of an all-round talent who will only get better with age. Though he has played at Carrington mostly, Garnacho has lit up Old Trafford already.

In two FA Youth Cup matches facing Scunthorpe and Everton, he scored one apiece including a Gareth Bale-esque finish against the latter.

Like his idol, Alejandro Garnacho is a speed demon on the flank. His preferred choice is down the left though he can also play on the opposite side. Garnacho is superb in one-on-one situations, twisting up defenders with a bevvy of skills. He knows he has the pace to get by them and regularly uses it.

Garnacho’s sense of where his teammates are also helps him in finding passes with ease. Furthermore, the fact that he can shoot from a range of distances means he is a threat whenever he runs at defences.

Garnacho has shown that he is not afraid to try something outrageous in order to help his team succeed. If he can keep up this momentum, he will join a long list of exalted wingers to have taken the Red Devils by storm.

Of course, nothing in life is guaranteed. It could be very well possible that Alejandro Garnacho could not replicate this form on a consistent basis. He has been putting on some really impressive numbers that are sure to take a hit in the future. However, given how young he is and the type of things he has done already, few would bet on his downfall.

Erik ten Hag has already become a fan. A new contract is in the works for Garnacho, reflecting the faith the club has in his huge talent.

Alejandro Garnacho can be the next superstar in the making for a club that has a long, proud history of developing elite talent. No matter how his career shapes up in the coming years, Garnacho is doing his utmost possible to become a household name.