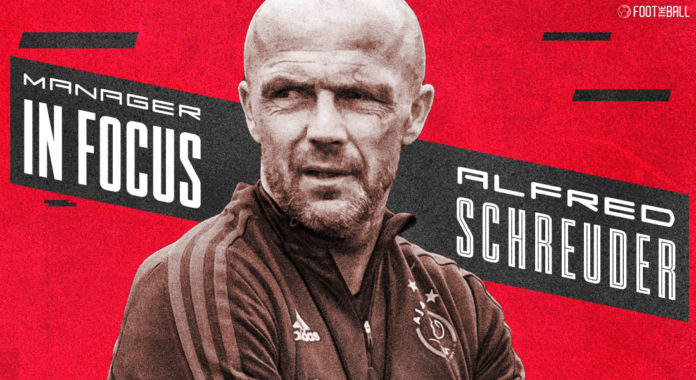 While Manchester United might not have been having the best transfer window, there is one area where they hit the jackpot. The club managed to lure Ajax’s manager Erik Ten Hag to Old Trafford. The Dutchman is one of the brightest man managers in football. However, his departure left Ajax in a fix as they searched for his new replacement. In the end, the Eredivisie champions appointed Club Brugge’s manager Alfred Schreuder to lead them in a new era.

However, replacing Ten Hag will not be any mean feat for Schreuder. The former manager oversaw two golden generations at Ajax. For information, here is the list of top players he developed, most of whom went to represent top European clubs.

This is an impressive list. Ten Hag also won six trophies during his stint at Ajax, including three domestic titles. However, Alfred Schreuder is no stranger to the club. A year after Ten Hag’s appointment, Ajax had hired Schreuder as an assistant coach. After winning two trophies, he moved to Barcelona as Ronald Koeman’s assistant before taking his third managerial job at Club Brugge.

So, who is Ajax’s new manager Alfred Schreuder?

Who is Alfred Schreuder?

Alfred Schreuder is a former Dutch football player. He played his entire career in the Netherlands, representing clubs such as Feyenoord, Twente and Vitesse. Immediately after finishing his career at Vitesse, he became their assistant manager. For the next 13 years, he would work at FC Twente, 1899 Hoffenheim, Ajax and Barcelona. During this stint, he worked under Julian Nagelsmann, Erik Ten Hag and Ronald Koeman.

Schreuder won four trophies, including one Eredivisie as a player, although he never represented his country. After his first job at Vitesse, he spent five years as Twente’s assistant coach before taking the main job in 2014, his first managerial stint. However, he had a horrendous first season, as Twente finished 10th in the league. This after they had finished third in the previous season.

He was assistant to Erik ten Hag at the club in 2018/19. He has also worked with Julian Nagelsmann and Ronald Koeman, and this season guided Club Brugge to the Champions League, winning 10 of 13 league games in charge. 🇳🇱❌ pic.twitter.com/j0DIwxCC97

The following season he joined Hoffenheim and served as assistant managers to Huub Stevens and Nagelsmann. And during his three years, the club went from surviving relegation by the skin of their teeth to consecutive top-four finishes in Bundesliga.

His stint now caught the eyes of Ajax. After his exploits in the Dutch capital, he returned to Hoffenheim for a season and finished fifth in the Bundesliga. And after a season at Barcelona under Koeman, he joined Brugge.

Alfred Schreuder-tactics and style of play

Schreuder replaced Philippe Clement, a back-to-back domestic league winner, when he took reins at Club Brugge. After Clement replaced Niko Kovac at AS Monaco, Schreuder took the job and made some radical changes. He preferred either a 3-5-2 or a 4-3-3 system. His intention was clear, win the battle in the midfield to win the match.

This is quite similar to top slides in Europe. Schreuder stresses building up from the back. While playing a 3-5-2 system, three players are essential to the build-up play, the two wing-backs and the defensive midfielder. The two wing-backs stand as close as possible to the byline. It helps in two ways. First, it makes the passing field as wide as possible, and second, it draws players out of their position to mark the wing-backs leaving space for the defensive midfielder who drops down the field to act as an additional passing option.

The play aims to use minimal short passes to move the ball up to the field quickly. The next phase of play involves moving the ball to the opposition’s goal. Here Schreuder prefers the use of intelligent runs and holding play. He stresses the use of well-timed runs to break the rivals’ shape.

Schreuder’s offensive mindset does not end when they lose the ball. In what can be described as a version of Jurgen Klopp’s Gegenpress, he prefers using counter-press, especially in the attacking third, to win the ball back quickly.

While the loss of Erik Ten Hag is significant, Ajax made a wise decision by appointing Alfred Schreuder. The Dutchman already has the experience of managing at the club, which will help him quickly get to work there. He has also served under some of the best young managers.

However, his greatest asset is his tactics, similar to Ten Hag. His counter-press, build-up from the back play, and use of intelligent movements are what Ajax deploy, although a little differently. The conventional “Tiki-taka” has undergone a change with physical attributes being equally important to the play now.

This will ensure that the Dutch champions have the smoothest of transitions.

Alfred Schreuder’s CV since leaving Ajax is impressive, coaching Hoffenheim for a year before moving to Barcelona to work under Ronald Koeman, joining Club Brugge in January & winning the league title just days after Ajax won theirs in the Netherlands. https://t.co/jaTtG1h2DP pic.twitter.com/20X1PL6ACD

In addition, Schreuder has the experience of winning it during a difficult season. Last season, the Belgian league was surprised by minnows Union Saint-Gilloise who romped their way to first place in the regular season.

However, Schreuder engineered a comeback as Club Brugge won four and drew two matches to finish first in the playoffs and win the league title. This shows his tenacity to get the best out of their players in crucial situations.

His appointment also mirrors that of Ten Hag. Both had played their entire career in the Netherlands and were appointed despite not having significant experience. While there might have been better options on paper, in Alfred Schreuder, they have a man who is best placed to repeat Ten Hag’s heroics at Johan Cruijff Arena.