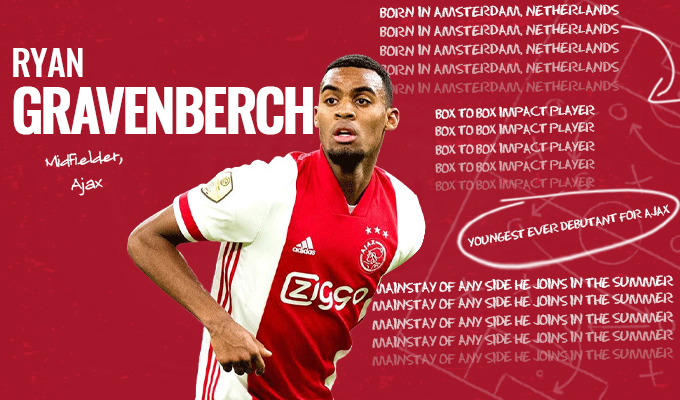 There are few other clubs better at producing and developing young talent better than Ajax. The Dutch giants have an esteemed youth academy and reserve team (Jong Ajax) that have churned out superstars like Clarence Seedorf, Frank de Boer, Dennis Bergkamp, Frank Rijkaard and countless others.

In fact, Seedorf held the record for the youngest ever debutant at 16 years and 242 days till 2018. The player who set the new record has become a regular starter for the team from midfield and is destined for a huge transfer in the near future.

From a 8-year old captain…
To the youngest debutant ever.

That player is, of course, Ryan Gravenberch, a central midfielder who can play in the holding role along with making advanced runs. Still only 19, he has made over 100 professional appearances already for the two Ajax sides combined and appeared at Euro 2020 with the national team as well.

Gravenberch will be a great addition for the Bavarians, who will have even more steel in midfield.

Even in Bayern Munich’s star-studded squad, expect Gravenberch to make his teammates sit up and take notice of his skills.

Having been born in 2002, Gravenberch joined amateur side AVV Zeeburgia in the seventh-tier of Dutch football in 2009. The club has earned a reputation of being the first team for many successful footballers including Kenny Tete, Joshua Brenet, Luciano Narsingh being some of the most well-known names. Gravenberch would only spend a solitary season there before moving onto the Ajax Youth Academy in 2010. He would slowly make his way through the different age levels before truly breaking out in 2018.

Having won the U17 Euros with the Netherlands, Gravenberch won the inaugural “Abdelhak Nouri Trofee,” which recognizes the best player in the Ajax academy along with the Eredivisie title and KNVB Cup double in the following season. He would make almost 50 appearances for Jong Ajax before alternating between the senior side and youth team during the 2019-20 season. Gravenberch became a regular for Ajax from 2020, making 32 appearances en route to having a solid season that really made him a household name in the country.

Three goals, five assists, Ajax Talent of the Year, and Dutch Talent of the Year are the personal accolades he picked up in his first full campaign, along with winning the league and cup double of course. The fact that it was his first proper year at the senior level, it is clear that Ryan Gravenberch was a special talent who can reach way further heights.

The first thing to know about Ryan Gravenberch is he is always very involved in the game. Whenever Ajax is building up from the back or in need of an overload of bodies in the final third, the 19-year-old can be found with ease. That is evident from some of the key stats put together by FBREF surrounding the midfielder as he is shown to be an elite ball carrier and receiver.

From the above chart, it is clear that Gravenberch is both a player who can move with the ball and can be found at the end of passes. His propensity to dribble and increased touches inside the opponent’s penalty area show how far forward he often takes up positions. Erik ten Hag sets his side up in a dynamic and fluid manner, in order to blaze through opponents. Gravenberch’s 2.73 shot-creating actions per 90 are incredible given that he starts matches from a double pivot but plays alongside the frontline at times.

The defensive side of his game, however, is something that can be worked towards and there is no suggestion that he cannot improve there. 2.09 interceptions per 90 are a decent return for a midfielder but Gravenberch is really lacking in other indicators. 12.83 pressures, 1.00 blocks, and 1.46 tackles per 90 are all in the bottom 10 percentile when measured against similar players over the last year. Gravenberch’s ability to play in a free roam manner enables his teammates to understand the play and drop back as and when required.

Gravenberch’s 6’2’ frame makes him a lanky fit but it is incredible how agile and smooth he moves with or without the ball. Though his physicality certainly needs improving, the tactical nous of gliding into spaces and being found in dangerous areas are already important facets of his game.

Erik ten Hag is bringing on 17 year old youngster Ryan Gravenberch for the final 20 minutes of the game. Exciting! pic.twitter.com/xGwjtk2U8s

A big part of his development right from the early years has come under the watchful eyes of Ajax’s coaches, and most importantly, ten Hag. The former Bayern Munich II and Twente manager continued to build on the work of his predecessors by developing one of the most exciting teams on the continent.

With Gravenberch, everybody knows there will not be too many goals or assists from the player but what the team benefits is from how well the fit is.

Without the ball, Gravenberch gets into the channels extremely well to draw defenders and make spaces for his teammates. Gravenberch has an extremely cool head on his shoulders and his decision-making is on par with any experienced pros in the game right now.

When you win the league’s best player award in your first full season as a regular, there’s always something that gets the world excited. Ryan Gravenberch’s progression over the past two seasons has been staggering as he is already performing at an even better level. Though he has played only 21 games, certain parameters have been on the rise nonetheless.

Likewise, he has regressed in some areas including passing accuracy p90 (49.4 from 66.3), and interception as discussed above. Ajax can expect some more goals from him before the season ends with an xG of 2.56 currently, but the fact that he is getting assists shows his eye for the final passes that unlocks opposition defences. Gravenberch has enough time to really make these stats world-class and though the Dutch league may not be the most competitive, the impending move away to Bayern Munich is sure to mark the next step in his career.

Ryan Gravenberch has already made 10 appearances for the senior international team, all of them coming last year. He scored against Georgia back in June, becoming the second-youngest Oranje player in more than a decade to do so. Having announced himself to the world with Ajax, he is definitely going to be on his way out after this season.

With all the drama surrounding Robert Lewandowski, it’s a nice piece of news. However, the German giants stole a march on their rivals and have concluded Gravenberch’s signing.

Their midfield does need enforcing with Corentin Tolisso on his way out and Marcel Sabitzer needing more time.

Official statement soon, while Bayern are still working on Laimer deal too. pic.twitter.com/AzEkZI6L1J

Getting Ryan Gravenberch provides a jolt of youth to the Bayern squad. Ryan Gravenberch’s playing style also perfectly suits Nagelsmann’s game plan. His dynamism in the centre of the field will be crucial to linking up defence and attack. Gravenberch can expect a fast-track role to become a crucial player for a Bayern Munich side looking to capture UCL glory.