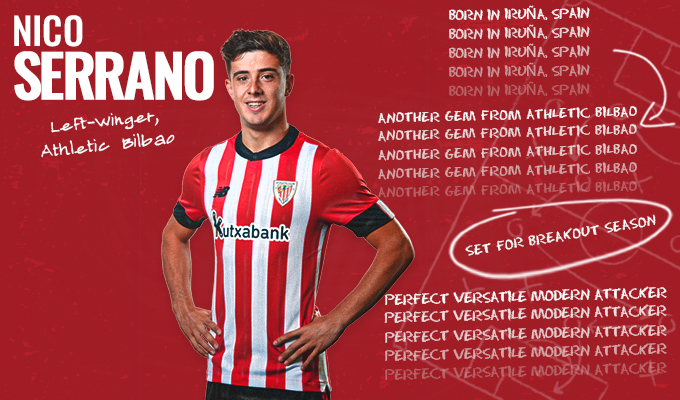 Will any fans want to see their club relegated? The answer is no, except if you’re an Athletic Club Bilbao fan. According to a Spanish paper El Mundo survey, fans would rather see their club relegated than give up their only-Basque signing policy called the Cantera. According to the policy, they only sign players born in Basque or who played their youth football career at a Basque club. This makes it very difficult for the club to maintain their high standards. However, such is Bilbao’s tenacity that they continue to do so. The list of Athletic Bilbao graduates who went on to dominate world football is long. From football’s ironman Inaki Williams, to Nico Williams and Unai Vencedor, the success stories are too many to tell. Nico Serrano is on his way to adding his name to the illustrious list.

Born in Pamplona, South Basque region, the forward was promoted to the first side before the 2021-22 season. While he was used as a substitute in the entire season, he still managed to make a strong case for more game time.

However, Bilbao’s manager Ernesto Valverde thinks that Serrano needs a loan spell before becoming integral to the first team. However, his chances of regular appearances for the first time are further strengthened by the lack of quality players due to the Cantera policy.

And while other Spanish players such as Gavi and his teammate Pedri have already established themselves, Serrano is just one step back.

Nico Serrano was born in 2003 and joined CA Osasuna’s youth academy in his hometown, Pamplona. And at the age of 12, he joined Villareal. Then, after spending two years in the Castellon region, he joined CD Roda before joining Bilbao’s youth system in 2018.

One year later, he was promoted to the under-19s before making his way to Bilbao Athletic, the reserve team. In the 2020-21 season, Serrano impressed, making 24 appearances. Playing most of the time on the left wing, Serrano was one of the few positives in a season where his team finished 15th in the league.

Afternoon. Im getting alot of suggestions in my discord & other discords for wonderkids to do. Today it is Nico Serrano
He is a Basque wonderkid.

And it was why coach Gaizka Garitano promoted him to the first team. His brilliant skills on the wing, combined with his blistering pace, made him a deadly forward at such a young age.

Like his stint with the B team in the previous season, he was one of few positives as his team finished eighth in the league. The next step for the youngster is to keep up the excellent work at his parent club or on loan, whatever it might be.

In the 2020-21 season with the reserve team, Serrano performed admirably, scoring one goal, providing five assists in the league, and scoring two goals in cup competitions. These performances ultimately got him to the first team. And while he only scored one goal, it was a quality strike.

Against Rayo Vallecano, Bilbao started a perfect attack which led to a cross from the right by Raul Garcia, which deflected off Pape Cisse’s head before falling to Serrano. With the ball bouncing, the youngster executed a perfect left-foot volley past a hapless Luca Zidane.

The goal consisted of perfect positioning, body posture and a sweet strike to top it all. And Serrano has done this again and again at the youth level. According to fbref, the player created 1.14 chances per 90 minutes. With the limited minutes he was accorded, this is an impressive stat.

His other stats follow the same story, they are not great, but when we look at the minutes he played, they seem pretty good for a 19-year-old.

While classifying Nico Serrano as a player, data analytics site, Soccerment used the term ‘All-round finisher’. And this is what he is, a forward who can do it all in the attack. Serrano has made massive strides in such a short period.

Serrano is a rare player who can use leg-breaking skills and be effective with them simultaneously. He can dribble his way out of a sticky situation and, at the same time, use exquisite passing to unlock the opposition’s defence. If these two do not work, his crossing is also good enough.

In a nutshell, he uses any means that best serves the team and his purpose. For example, while he is an excellent shooter, he wouldn’t think twice about passing to a teammate if they are in a better scoring position.

Serrano is already one of the best young talents in Spain. The winger has an array of skills but what makes him dangerous is his ability to adapt. It does not matter what skill he uses, and his ultimate aim is to get the job done. It was this tenacity that made him a prodigy.

In addition, Serrano is a quick learner. He spent one year in the under-19s before moving to the reserves. Then, the same cycle happened again as he was promoted from the reserve team to the main team.

While brilliant on their own, these skills improve even further when we take note of the Cantera policy. For now, he needs to keep his head down and work hard, ensuring a stint in front of the San Mames’ crowd becomes a recurring feature.

The 19-year-old has all the skills to succeed at the top level. However, now he has to master the most complex skill, consistency. While there are many talented players, consistency is a bar that most fail to clear.

While Serrano has shown some glimpses of consistency, he still needs work to get up to La Liga’s standard. And while his talent is justified, we’ll get a better picture of his potential when he becomes a regular on Bilbao’s first team.

At that stage, players such as Aymeric Laporte and Ferran Torres differentiated themselves from the rest. While Bilbao may have an ‘only Basque‘ policy, it is still one of the league’s top teams.

The success of Serrano will also be instrumental for Bilbao, who do not have the luxury of getting players from outside the Basque country.