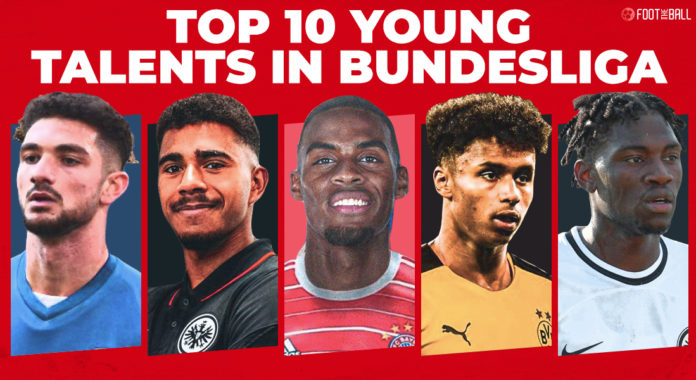 The Bundesliga has been a one-horse race for the past decade. Bayern Munich have continually won the title. However, a key part of the league has always been the evolvement of youngsters.

Indeed, several German clubs are among the foremost in nurturing teenagers. Despite Bayern hogging the limelight, these young starlets have been at the forefront of their respective teams’ journey.

With the 2022-23 season on the horizon, there is no doubt more such gems will be unearthed. Therefore, FootTheBall looks at 10 of the best young stars to watch out for over the coming year.

The 17-year-old forward joined Borussia Dortmund in 2020, but this could be the year he truly takes flight. Bynoe-Gittens’ progress was massively curtailed by the COVID pandemic, followed by serious injury issues.

Therefore, it was only in 2021-22 that he started playing to his potential. Moreover, Bynoe-Gittens shone brightly in the UEFA Youth League, scoring six goals in just four matches. That kind of form saw him make his Bundesliga debut towards the latter part of the season.

Bynoe-Gittens is one of the brightest talents in Germany right now, and will be a regular part of the furniture in 2022-23.

One of the most talented young midfielders who has the world at his feet. Gravenberch was an extremely sought-after player in the 2022 summer market. Bayern won the race for the 20-year-old Dutchman who has already won the Eredivisie title.

How will fellow new signing Matthijs de Ligt fit in? We find out here

Moreover, Gravenberch was an essential cog in Erik ten Hag’s all-conquering Ajax team. Therefore, it will be no surprise if ends up as the best young player for 2022-23.

However, the only worry is that Bayern have the services of Leon Goretzka and Joshua Kimmich in midfield. It remains to be seen how well Gravenberch shines in his chances.

76 goal contributions in 132 senior matches for Sparta Prague is the kind of stuff that really gets noticed. Hlozek is the youngest player in the Czech giants’ history and Leverkusen will be hoping for more of the same.

Furthermore, the 20-year-old can play across a variety of attacking positions without sacrificing his threat level.

Leverkusen already have the services of Florian Wirtz and Patrick Schick, with Hlozek adding the finishing touch. Therefore, there is no doubt that UEFA Champions League football has to be the goal now.

The former D.C. United left-back has been mostly playing with the youth teams. However, Paredes has made a couple of appearances in the Bundesliga. The 2022-23 season will be the big test for the player who can also play left-wingback.

Moreover, Paredes is a solid player on both ends of the pitch, with pace to chase down attackers. Wolfsburg have an exciting 19-year-old player who they can develop superbly.

The current Europa League holders have one of the best right-wingbacks in Europe. Knauff came through the academy at Borussia Dortmund.

However, a lack of senior opportunities see him leave for the Eagles in January 2022 on loan. Knauff made 12 Bundesliga appearances, and his eagerness to carry the ball forward has earned plaudits.

Moreover, Knauff can also intercept dangerous passes brilliantly which makes his defensive work easier. Frankfurt will look to build up on their recent progress in 2022-23.

The heir to Erling Haaland at Signal Iduna Park. Adeyemi had 18 goals and seven assists for RB Salzburg across all competitions in 2021-22.

Extremely agile, crafty, and difficult to mark, Adeyemi has all the hallmarks of a future superstar. Dortmund are experts in developing strikers and Adeyemi is one of the best in his age group.

The 20-year-old is sure to take time in settling down. However, once he finds his groove, there is no doubt that Adeyemi can hit double-digits in goals every season.

The 19-year-old is the cousin of current Inter star Hakim Calhanoglu. Schalke are back in the Bundesliga after a disastrous 2020-21. Kerim Calhanoglu made his league debut in early 2021, before featuring 10 times in the second-division.

However, the next goal is to establish himself as a regular in the lineup. There is no doubt that Calhanoglu will have his fair share of opportunities in 2022-23.

The left-sided midfielder/defender has a no-nonsense attitude and is comfortable on the ball; qualities that will be needed over his career.

It was a very interesting 2021-22 for the former Hertha Berlin goalkeeper. Having started the season as fourth-choice, Lotka took advantage of his competitors’ absence by making 10 appearances.

Calm, collected, and a supreme ability to judge strikes have helped his star rise manifold. All of it saw a summer move to Dortmund, where he will back up current incumbent Gregor Kobel.

However, it is certainly only a matter of time before he is making even more appearances on a regular basis.

The youngest player on this list at just 16-years-old. Wanner has already featured four times for the German champions.

Needless to say, he is the youngest player to play for Bayer in the club’s rich history. The attacking midfielder’s talent and pedigree has never been in doubt with Julian Nagelsmann hinting of more involvement soon.

Though he will not be a regular in the lineup, Wanner will certainly be part of many matchday squads as he continues his rapid ascent to the top.

A central figure in Hamburg’s return to the Bundesliga via the Bundesliga 2 playoffs. Alidou recorded two goals and eight assists in just 23 matches.

Moreover, it was his first full season at that level which convinced Frankfurt to sign him. Alidou is only 20-years-old and loves playing down the left flank.

Despite being right-footed, the Germany U21 international has a knack for taking down defenders on the opposite wing. Therefore, he is surely set to figure as one of the most exciting youngsters of the league.