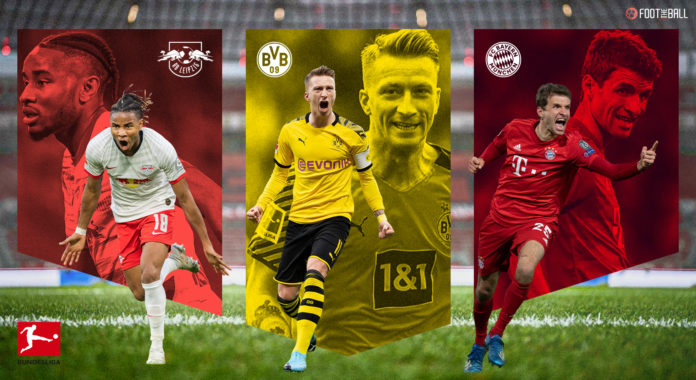 Bayern Munich might have shattered records on the way to winning their 32nd Bundesliga title and a record-breaking 10th on the bounce, but as the new season in Germany’s top-tier football dawns, the Bavarian’s rivals are waiting to break this streak. Even with this stranglehold of Bayern Munich on the German league title, Bundesliga rarely disappoints football fans and neutrals when it comes to high-intensity football and high-scoring matches

While there is no argument why Bayern cannot win their 11th league title in a row, there is plenty of competition for the places below. From Borussia Dortmund and co. fighting for UCL spots to the wrong end of the table relegation scrap, this season promises to be a thriller.

When it comes to Bundesliga and its eventual winners, serial-winners Bayern Munich come to mind – and with a good reason. Since the days of Jurgen Klopp managing Borrusia Dortmund and his teams’ back-to-back title wins, the Bavarian heavyweights have been smashing records left and right leaving other teams with no chance.

Last season Bayern Munich were led by young and former RB Leipzig manager Julian Nagelsmann. The German manager made sure of the Bavarian’s supremacy in the league and did that in an emphatic fashion. The cherry on top was that the attack that was spearheaded by Robert Lewandowski, netted a staggering 97 goals, which summed up their status as the King of German football.

Even though the Polish striker decided to part ways this summer with Bayern and join Barcelona, it is nailed on that Nagelasmann’s team have already sealed the title even before the season has begun. Speaking of outgoings, Bayern have been busy bringing in players as well. The likes of Sadio Mane, Matthijs de Ligt and Ryan Gravenberch are all quality signings and will no doubt raise the competition levels inside the current squad.

Also read: How good a fit is Matthijs de Ligt at Bayern Munich?

Even with the exceptional rate of goals that Erling Haaland brought with him to Borussia Dortmund, the German club were unable to displace Bayern as German Champions. Now with the Norwegian striker moving to Manchester City, BVB manager Edin Terzic has a task on his hands to compete with the Bavarians and try to finally break their hot streak of title wins.

Die Borussen have largely had to settle for 2nd place finishes for the last couple of seasons and that shows clearly why they have been the 2nd best in the league. Although, this consistency of trying to keep pace with the German champions combined with their shrewd business in the transfer market, this might be the season for the Black and Yellows.

The Der Klassiker has also been a one-sided affair since the days of Jurgen Klopp at Dortmund, and BVB’s inconsistency in finishing off games against the teams from the lower half of the table means an easy ride for Bayern. If Terzic’s troops find a way to tackle these issues, then they might have a chance of claiming the title come the end of the season, or else do not be surprised seeing them finish behind the Bavarians once again.

The duo of Bayern Munich and Borussia Dortmund have been an ever-present feature in the top 4 places of Bundesliga. Dortmund have only once failed to qualify for UCL during the dominant 10-year winning spell of Bayern, and that was in the final season of Klopp at the Signal Iduna Park.

Congratulation to @c_nk97 for a blistering season🔥

The other usual suspects Bayer Leverkusen and RB Leipzig will once again fight it out for the remaining 2 spots in the top 4. Leverkusen were the form team outside of the Big 2 in Bundesliga and will definitely will be hoping to keep that up or even better last season’s finish. Leipzig had a very mediocre season set by their own standards with Jesse Marsch being fired midway through the season, with Domenico Tedesco steadying the ship. The Bulls had to battle it out all the way to the final day of the season for a top 4 spot who were in a close battle with surprise package Union Berlin.

Although not many arrivals have been there in the summer 2022 transfer window for both teams, they should have very little trouble in qualifying for yet another season of the Champions League. Providing competition to these 2 clubs will be the likes of Union Berlin, Borussia Monchengladbach and Eintracht Frankfurt. Eintracht Frankfurt might have had a poor season domestically, but having won the Europa League and getting the season to this year’s UCL, watch out for the dark horses of this season’s Bundesliga.

Augsburg and Stuttgart barely kept their heads afloat last season to extend their top-flight status to another campaign. While the former finished just a point clear of the dreaded play-off relegation spot, a superior H2H record to Hertha BSC helped the latter stay safe.

A second-leg play-off comeback saved Hertha from relegation at the expense of second-tier giants Hamburger SV. It will be up to new manager Sandro Schwarz to orchestrate a safer Bundesliga campaign for one of the most famous German clubs next term.

If you are looking for the hottest candidates to drop out to the Bundesliga 2, perennial top-flight strugglers Vfb Stuttgart appeal as a likely pick after years of dodging the bullet by the tiniest of margins. As was the case with Hertha, who were dancing on the edge for years, for a club with so much history, they have been flirting with the drop zone for too many seasons.