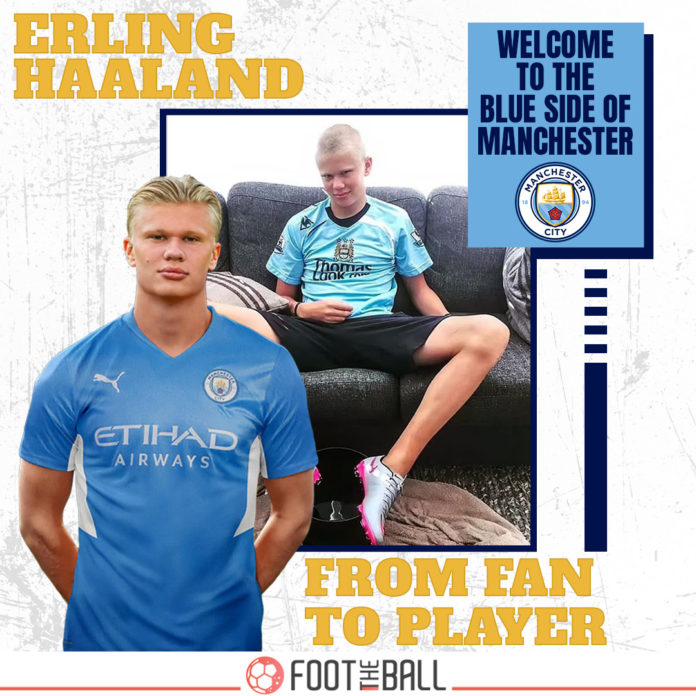 Erling Haaland sent some shockwaves through the footballing community recently when he completed a move to Manchester City, despite sparking interest from a cluster of big European clubs.

Haaland made his name at Borussia Dortmund and he became one of the most feared marksmen in the game during his two-and-a-half-year spell with the Bundesliga club.

On his debut, he bagged a hat-trick and he was potent throughout his time at Dortmund, scoring on average just over a goal per game.

While he may have been beset by injuries last season, he still wound up with 22 goals in Germany’s top flight, with only Patrik Schick (22) and Robert Lewandowski (35) netting more.

Haaland is no stranger to City as his father, Alf-Inge Haaland, enjoyed a short spell with the Premier League champions and perhaps City was more of a calling.

City has been on the hunt for a world-class striker since Sergio Aguero left and the Argentine immortalised himself with his stunning last-gasp winner at the end of the 2011/12 season against QPR that secured City’s first Premier League title.

Haaland will be expected to hit the ground running, and while it takes some foreign players longer to settle than others, Haaland won’t be afforded that luxury and his stats speak for themselves.

After landing the title, Pep Guardiola will look to tweak his squad and there have been reports that they could make a foray in the summer transfer window, with rumours that Kyle Walker and Gabriel Jesus could leave. In many respects, Haaland is a serious sign of intent on City’s part as the owners are desperate to land the Champions League – the only trophy that has continued to elude them.

City has been a dominant force in English over the past five seasons, clinching four league titles and they attract a serious amount of attention. With a huge fan base, City also carries a lot of weight with the leading bookmakers no matter what competition they are involved in.

You will find some top free bet codes available at the likes of bet365, which can be used for outright markets, such as City to win the title in the 2022/23 season, and bettors can also use these offers for player specials, such as Erling Haaland to score more than 25 league goals next term for City in his debut campaign.

Haaland may have been a snippet as City only had to meet his £51million release clause, but in the past couple of years, a trend has been established with transfer fees falling.

Nevertheless, Haaland is well placed to enjoy a spectacular season for City and he should fit in well into Guardiola’s system. The Norwegian hitman works hard on and off the ball, which is something Guardiola appreciates and he will strike fear into the heart of defences as he is deadly in front of goal.

Whether or not City manage to lift the Champions League next season remains to be seen. But with Haaland in their ranks, anything is possible and there will be an unshakeable belief with those connected to City that their dream will be realised sooner rather than later.