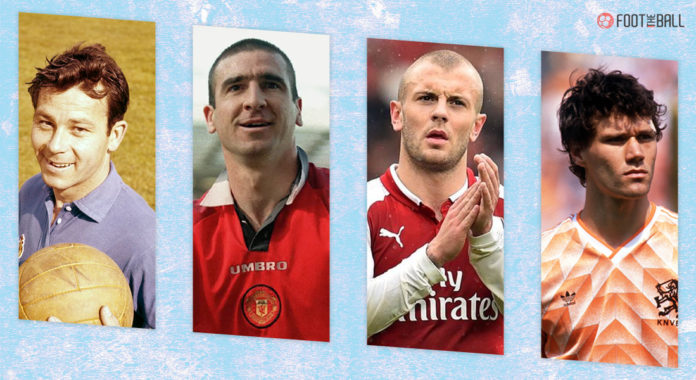 Footballers retiring in their late-20s and early-30s is not a common sight nowadays. Generally, they tend to motor along till their late-30s and even early-40s. So, it was definitely a big surprise when Jack Wilshere, a former Arsenal prodigy, announced his retirement from the game at 30.

Arsenal have completed the signing of Gabriel Jesus, but can divine intervention help them win back UCL football?

Wilshere was one of the best young players for the Gunners in the early 2010s, including that one superlative performance against Barcelona in 2011. However, injuries had slowed his career down, and a move to West Ham United did not work out.

Wilshere barely played, before having short spells with Bournemouth and Aarhus Gymnastikforening (AGF) in Denmark. The 34 caps England international is set to take charge of the Arsenal U18s, but his career remains a great ‘what if?’

Nevertheless, Wilshere is just one more famous name added to the list of players to retire early. FootTheBall picks the top 10 players to leave the game too early over the years.

The boy wonder who could do no wrong. Wilshere was favourite of Arsenal and Arsene Wenger, with his unmatchable skills. He was well on his way to becoming a superstar, and had already shown glimpses of a hugely successful career in store.

I’ve lived my dream. Thank you all ❤️ pic.twitter.com/rB5gnyyUlK

However, injuries were always around. Wilshere won the FA Cup in 2014 and 2015, but only made 43 appearances in between 2015 to 2018. The problems did not get better after leaving Arsenal, as a decent first season at West Ham was followed by more injuries.

Bournemouth and AGF provided much respite but the race was over. An unfulfilled career with the potential to explode never really took off.

13 goals in a single FIFA World Cup finals campaign? Just too easy. Fontaine was a goal-scoring marvel, who scored 145 goals across 152 appearances for Stade Reims across all competitions.

His partnership with Raymond Kopa was one for the ages, and the duo won two Ligue 1 titles, alongside reaching the 1959 European Cup final. However, it was his exploits with France that really cemented his legacy.

30 goals in just 21 appearances, including that record haul at the 1958 FIFA World Cup. Unfortunately, Fontain retired in 1962 at the age of 28, after a recurring injury.

The most successful “water carrier” in the history of football? There is no doubt! Deschamps won two UEFA Champions League titles, one Ligue 1 title, one FA Cup, and three Serie A titles.

Eric Cantona tried to engage in mind games with his fellow international, but Deschamps had the last laugh. The current France boss led Les Bleus at the 1998 FIFA World Cup and Euro 2000.

Moreover, he became one of the just three managers to win the World Cup as a player and manager when France won again in 2018.

The Laudrup brothers are legendary in Denmark, but Brian had to retire early. The younger brother to Michael Laudrup won league titles in Denmark, Italy, and Scotland.

Brian Laudrup was part of the golden era of Rangers in the 1990s, before also picking up a UEFA Super Cup during a short stint at Chelsea. He finished his career with Ajax, leaving the game in 2000 due to injuries.

He won honours at Brøndby, Bayern, Milan, Rangers and Chelsea 🏆

Paul Gascoigne on Laudrup 🗣
“Brian Laudrup was an amazing player. In training even if you knew exactly what Brian was about to do, you still couldn't stop him.” pic.twitter.com/hVI3rmiPSk

However, Brian Laudrup remains immortal for being one of the key orchestrators in the national team’s Euro 1992 triumph, followed by victory at the 1995 FIFA Confederations Cup.

Petit was a central figure in one of the most “gazumps” in world football. The French midfielder was on the verge of signing for Spurs, before Arsene Wenger got him at Arsenal.

Petit won a Premier League title and a FA Cup with the Gunners, before playing for Barcelona and Chelsea later on.

Arsenal winning the Premier League undefeated is the stuff of legends. Where are the Invincibles now?

However, the highlights of his career include winning the 1998 FIFA World Cup and Euro 2000 with France. Petit retired in 2004 as he could not recover from a knee surgery at the age of 34.

One of the pioneers of Asian football, Nakata was the second-ever Japanese player to play in Serie A. He signed for Perugia in 1997, before his career took off. Nakata won the Serie A crown in 2001 with Roma, and the Coppa Italia in 2002 with Parma.

He finished his career with spells at Fiorentina and Bolton Wanderers. Nakata represented Japan at three consecutive FIFA World Cup, before retiring in 2006. Since then, he has been a very successful model and fashion icon, credited for turning Asian fans to Italian football.

The Dutch striker burst onto the scene with Ajax in the early 1990s, scoring the winner in the 1995 UEFA Champions League final. Kluivert scored 39 goals in 70 games, before leaving for AC Milan.

However, he would only stay for a season, and it was at Barcelona where he truly showcased his potential. In six years, Kluivert would net 122 goals across 257 appearances in all competitions. He won the La Liga title in 1999, and left in 2004. Short spells followed at Newcastle United, PSV, PSG, and Lille before he retired in 2006.

Kluivert was only 30 at the time, but was already top scorer of the Netherlands national team with 40 goals. The Oranje finished fourth in the 1998 FIFA World Cup and third at Euro 2000.

The mercurial Frenchman was an enigma all throughout his career. Cantona joined from Leeds and immediately made Manchester United the kings of England. His ability to score from everywhere and confidence in himself were unmatched.

Cantona led United to four Premier League titles in five seasons, alongside winning the FA Cup twice. However, one of his most memorable antics was the kung-fu kick in January 1995 against a Crystal Palace supporter.

Cantona was banned for eight months and lost his place in the French national team. United lost the title to Blackburn Rovers, but Cantona would make his comeback. It would be very short-lived as he suddenly announced his retirement in 1997 at age 30.

A three-time Ballon d’Or winner, Van Basten was as talented as they come. He won six league titles with Ajax and AC Milan, along with two European Cups in 1989 and 1990. Van Basten was one of the most important pieces in the Netherlands winning 1988, with his famed volley goal the stuff of legends.

His partnership with Ruud Gullit and Frank Rijkaard at Milan constituted the backbone of the great team. However, Van Basten was beset with ankle injuries, and his last professional match was the 1993 UEFA Champions League final.

He spent two years on the treatment table before eventually calling it quits in 1995 at the age of just 28.

The 2014 FIFA World Cup winner had a strange career and an even stranger exit. Schurrle made his name with Mainz and Bayer Leverkusen, before Chelsea signed him in 2013. However, he would not become a regular in the side, leaving the Blues in January 2015.

OFFICIAL: André Schürrle has announced his retirement from professional football at the age of just 29.

🗣️ "The decision matured in me for a long time and the lows became deeper over time and the highlights less and less."

Sad to see such a baller leave the game at that age. 💔 pic.twitter.com/SbKbjr3Kje

A return to the Bundesliga with Wolfsburg saw him win the DfB-Pokal and German Supercup in his first season. Moreover, he also picked up a Premier League winner’s medal. Borussia Dortmund signed him in 2016, before he finished his career with loan spells at Fulham and Spartak Moscow. However, he managed to add another DfB-Pokal to his cabinet.

He retired in 2020, stating that the competition and rigour was taking a toll. Schurrle remains most famous for proving the match-winning assist to Mario Gotze, another rejuvenated star, in the 2014 World Cup final against Argentina.