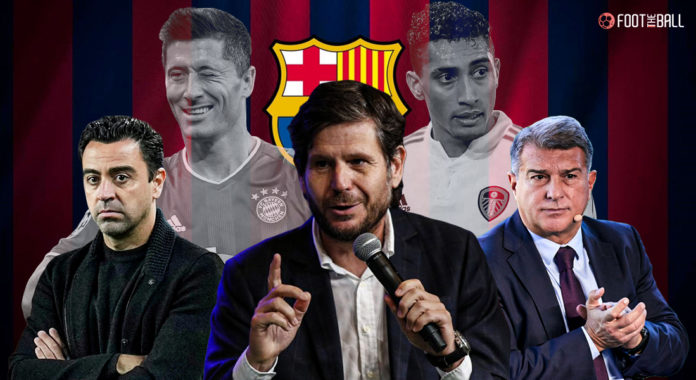 FC Barcelona are one of the most esteemed sporting institutions in the world. Joan Gamper’s vision of them being a multi-sports team has been immensely successful. The men’s football team is among the most revered, having been graced by the world’s top players.

However, their recent fortunes have been less than glamorous. The ongoing financial crisis has had a major effect on their ability to buy top players. President Joan Laporta has maintained his resolve of bringing in reinforcements for Xavi and co.

The 2022 summer transfer window has seen the club being heavily involved. However, not all of their planned deals have gone through. In fact, Barcelona have proved to be major roadblocks for other teams looking to complete transfers. How so? Well, that’s complicated.

That is the question on everybody’s lips. Laporta has talked highly of the “economic levers,” financial plans which will help raise a lot of money. However, they have not been fully activated yet.

Therefore, there is a cash crunch. Nevertheless, the Catalans are wrangling with several teams over buying some expensive players. The major clash has arose with Chelsea over the transfer of Raphinha. The Blues looked to have everything wrapped up with Leeds United and the player, before Barcelona popped up.

Deco, Raphinha’s agent, is a former Barcelona player so was willing to listen to their offer. Laporta did try to stall the move, in order to raise the necessary funds. However, Leeds pushed his hand, and they have made a formal offer.

A deal that was in Chelsea’s bag, has been turned into a waiting game by Barcelona. It will be a major coup if they are able to complete this shock signing.

Robert Lewandowski is in a flux. The Polish phenom has spoken many times of his desire to leave Bayern Munich. However, his contract expires in 2023 and Bayern are in no mood to let him go early.

Barcelona have been trying to find a way, which has seen them make a generous offer. However, a lot of it depends on whether Bayern will be able to find a replacement.

Cristiano Ronaldo has been touted as a potential target, while they have already signed Sadio Mane. Lewandowski has been adamant that he will only leave for Barcelona, and the Blaugrana do need a new striker.

What is happening with Frenke de Jong?

One of the most confusing transfer sagas in the whole transfer window. De Jong is Manchester United’s number one target. Erik ten Hag has been clear on that right from the start.

However, the player is not best convinced of a move right now. Moreover, Laporta has stated publicly that he will do everything to keep De Jong at the club. That raises another financial question.

Do Barcelona have the funds to keep him? There have been reports of them owing De Jong $20m in wages, which is further complicating a transfer.

The prolonged negotiations surrounding De Jong has angered United fans, leading them to confront CEO Richard Arnold. However, the outcome of the discussions is anybody’s guess.

Dembele to stay and more

Another prolonged source of interest has been the future of Ousmane Dembele. The injury-prone Frenchman cost a lot of money when he joined from Borussia Dortmund. However, his performances have left a lot to be desired over the years.

Xavi’s arrival saw a marked upturn in form, with Dembele having a major hand in Barcelona qualifying for the UEFA Champions League. Nevertheless, all was not well between the player, his agents, and the board. Talks of a contract had stalled out over salary demands.

The top facts about Barcelona stalwart Gerard Pique you must know!

Moreover, Laporta had also publicly said that he has to leave back in January. However, things seem to have settled down, with a new contract offer on the table.

Chelsea are also interested in him, provided they fail in their pursuit of Raphinha. It is highly improbable that Barcelona keep Dembele AND sign Raphinha.

Speaking of salary demands, Barcelona have already completed the signings of Franck Kessie and Andreas Christensen. It is really a wonder from where all the salary is coming from.

Philippe Coutinho’s departure and Clement Lenglet leaving on loan has helped reduce the burden. Barcelona are also looking to offload Samuel Umtiti, who has barely played over the years.

It remains to be seen whether all of the planned moves pan out. Barcelona are aiming for the stars, and taking a lot of prisoners along the way.