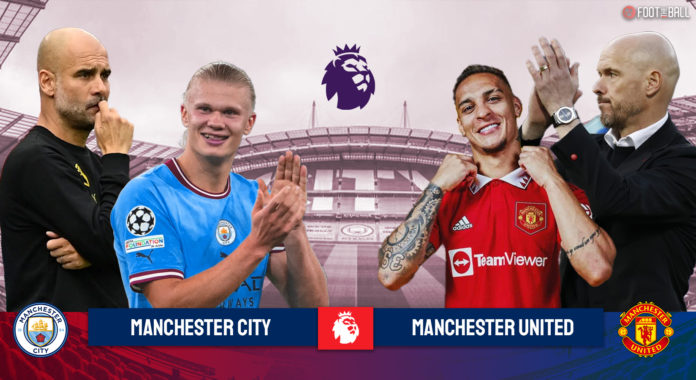 The fight for the city of Manchester is here again. The list of Manchester Derby iconic moments is a long one and this edition of the game has the potential to be an all-timer. The master meets the protege as Erik ten Hag, who spent his formative years managing Bayern Munich’s reserve team under Pep Guardiola, will now go head-to-head against Pep’s City.

Erik ten Hag will be hoping to find a chink in the defending champions’ armour. On the other hand, life’s good at Manchester City. Pep Guardiola’s side finally have the ice-cold finisher they craved after completing the Erling Haaland transfer. Haaland has begun paying back that transfer fee in some style, scoring for fun.

Excited for The Manchester Derby?
who wins? 🤔🔴🔵

United, after a disastrous first two matchdays, have risen like a phoenix from ashes. This match would have been a walkover for Manchester City then. However, Liverpool would be at pains to tell anyone to not take the Red Devils lightly in a derby game. The Manchester Derby head to head record has started tilting towards the blue half lately. Can Erik ten Hag’s charges repeat the North-West derby heroics in the Manchester Derby?

We go through it all in the Manchester City vs Manchester United preview!

The game comes after the international break so both managers will have a tired set of players coming off travelling long distances. Both sides have a settled look to them, and only fatigue might play a part in any surprise selection calls.

Aymeric Laporte is a long-term absentee for the Cityzens after undergoing a knee surgery last season. Besides him, Stones is an injury worry for Guardiola’s side. Manuel Akanji is set to make his Manchester Derby debut. Barring any unexpected tactical tweak, the Manchester City XI should be a list of usual names in their usual roles. Guardiola has been trying to cultivate a strikeforce of Julian Alvarez-Erling Haaland so that selection call is one to keep an eye on.

For Manchester United, the chopping and changing in the first two games has made way for a settled side producing good performances and results. Jadon Sancho is enjoying his best stint as a United player.

Excited that Varane, Eriksen, and Malacia have all completed their international games without picking up injuries 😀

The long break also comes at a good time for Martial, who is in contention again after overcoming an Achilles problem. He could come off the bench as he starts to build match fitness. The defence looks settled and Casemiro’s wait for a PL start might go on due to McTominay’s sterling form.

A derby is all about winning individual battles and stamping your authority. It is often said that the form book goes out of the window during these games. Therefore, the key battle for Manchester City is to see if Erling Haaland manages to dominate Lisandro Martinez.

Haaland has taken to PL like a duck to water. Martinez has faced Haaland before in an Ajax vs Dortmund game but Haaland has taken his game to an even higher level since, if that was at all possible. If the Norwegian gets into his stride early, it could be a long night for Manchester United. In midfield, de Bruyne is the creator-in-chief of the City side. McTominay’s closing down of de Bruyne will be pivotal to United’s chances of winning.

Meanwhile, United will look to free up Eriksen so he can find Rashford, Sancho and Antony with line-breaking through balls behind City’s high backline. Of course, that will be for nought if Varane and Martinez can’t deal with Haaland at the other end. Kyle Walker’s battle with Sancho will be one to watch out for.

Manchester United have shown growth under Erik ten Hag’s short tenure. Wins over Liverpool and Arsenal were encouraging, but they were also driven by a rabid Old Trafford support that had the players unlocking extra gears to their performance.

Manchester City have the home advantage, a deeper squad to deal with fatigue issues post the international break, and are far ahead in terms of time under the manager. These advantages combine to make Manchester City the favourites. United fans would probably accept an encouraging performance, even in defeat.