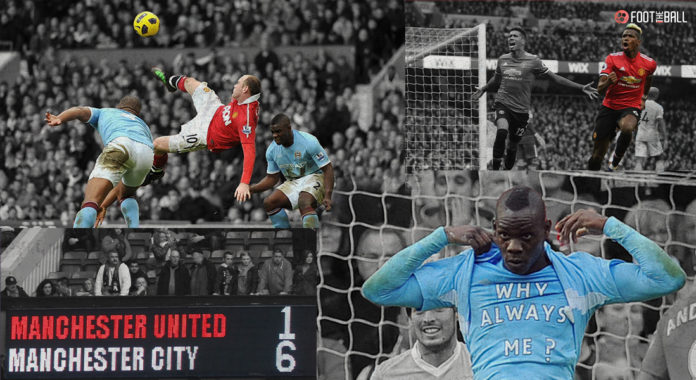 One city, two teams; the rivalry between Manchester United and Manchester City runs deep. Also, drop right back to the 1970s, where derbies were ‘frequently bad tempered’. Career-ending injuries such as United’s George Best’s tackle that broke City’s Gary Pardoe’s leg (he nearly lost his leg to the severity of the break). Also, this proves Manchester derbies are far from dull and safe.

Clashes between Manchester United and Manchester City rarely disappoint – and the derby has provided plenty of incredible moments over the years. The dynamic of the rivalry has changed immeasurably in recent years, with City now just as established among the world’s elite as their old foes from Old Trafford.

FootTheBall looks at the most memorable Manchester derby matches between these 2 English giants.

A see-saw derby in September 2009 saw Craig Bellamy score in the 90th minute to draw City level at 3-3. It looked like he had earned Mark Hughes’ side a point. But that was until Michael Owen scored his most famous United goal.

Deep into stoppage time, Owen took a pass from Ryan Giggs and poked the winner past Shay Given. The United fans at Old Trafford went berserk and left Hughes fuming at the Fergie time that had been added on at the end. The first time Old Trafford went wild for a Liverpool “Legend”.

Gary Neville has never kissed anyone before or since with such intense love. Was it really worth a 93rd-minute winner at your nearest rivals? “A kiss on the lips from Nev is worth it any time after a winner against City!” Scholes told the Manchester Evening News in 2013.

John O’Shea has a different outlook: “Poor Scholesy couldn’t do much, could he? He was the poor victim who tried to push him off, but it was too late.

“That’s Gaz for you. I don’t think it was for his benefit, mind you. I think it was to make the City fans feel that little bit angrier!”

The 2011-12 season will go down in history due to the final day drama. Which saw Manchester City pip United thanks to a very late Sergio Aguero goal. The warning sign was launched in October of the same season when City romped to a 6-1 victory at Old Trafford. A famous ‘Why always me?’ slogan was introduced by Balotelli as United fell apart in what Sir Alex Ferguson described as his ‘worst ever day’ in football.

After scoring the first goal for #MCFC in a 6-1 win over #MUFC at Old Trafford in 2011, Mario Balotelli did this…

Was this celebration Balotelli's most memorable? pic.twitter.com/WVfMYp9iCz

In 2011, with scores tied at 1-1, Wayne Rooney scored the most memorable goal of his career; a Nani cross was met with the most spectacular bicycle kick from United’s number 10, and the ball sailed into the top corner past a despairing Joe Hart. Rooney’s goal is most certainly the best goal scored in a Manchester derby to date, probably in the PL too!

PL would never have had that “Aguerooooooo” moment. If anything, we’ve got Steven Pienaar to thank for the most dramatic moment in the history of the Premier League. The Everton midfielder bagged a late equaliser as United conceded twice in three minutes to blow a 4-2 lead and put the title in City’s hands with three games remaining.

First, City needed to beat the Red Devils at the Etihad the following week to go top of the league on goal difference, and fittingly it was their captain, Vincent Kompany, who came up with the winner, powering in a header.

City’s mercurial captain would repeat that feat in the 2019-20 season to kill Liverpool’s title hopes.

The 1964 Ballon d’Or winner Denis Law had enjoyed a highly successful spell at United and was part of the club’s first-ever European Cup win in 1968. Today, his statue stands in front of Old Trafford.

However, in 1974, it was a Law goal that would help seal United’s fate, as they were relegated from the First Division. The goal didn’t directly relegate United, as results elsewhere forced that, however, even if these results didn’t happen, Law would have then been directly responsible.

In a Manchester derby where United had to avoid defeat to be in with a shout of survival, the ball fell to Law in the box, who coolly backheeled the ball past Alex Stepney, helping cement their place in the Second Division.

United had been in a serious decline for a few years following Sir Matt Busby’s move into a board role, away from first-team duties. However, this remains arguably the club’s darkest moment on the pitch.

This Manchester derby was less about football and more about Roy Keane and Alf-Inge Haaland’s longstanding feud. It seemed that bygones would not be bygones after Haaland accused Keane of faking a knee injury during his time at Leeds.

During this particular derby, Keane reacted in a typical Roy Keane fashion. Also, a horrendous knee-high tackle left Haaland in a heap. Many believe to this day that the tackle ended Haaland’s career as he knew it, and Keane was hit with a three-game ban and a 5k fine. Controversially, Keane would go on to admit that the tackle was intentional with a motive to cause harm.

The iconic “1-6” game that saw the power in Manchester started to shift as United welcomed their neighbours to Old Trafford in 2011. The game early on in the season was looked at as an early battle for the title, but with United defending champions and City two clear ahead of them at the top, it was impossible to call.

The champions seemed powerless to stop City and despite a Darren Fletcher goal, there was only ever going to be one outcome when Jonny Evans received his red card at the end of the first half. Goals from Mario Ballotelli in either half, Sergio Aguero, Edin Dzeko (2) and David Silva condemned United to their worst home defeat in 55 years and it remains to this day, their worst ever defeat in the Premier League, alongside another 6-1 hiding at Old Trafford to Tottenham Hotspur in 2020.

To make matters worse, United would concede the title to City with practically the last kick of the season on goal difference, with just eight goals being the difference.

Pep Guardiola’s 2017/18 City side will go down as one of the greatest teams to ever grace the Premier League, as they eventually became the first side to ever accumulate 100 points in one season, which surpasses any record United ever set in the league by quite some margin.

In April of that campaign, they had the opportunity to seal their third title against their biggest rivals, as a win at the Etihad would crown them champions in front of the 20-time winners of the top flight. After storming into a 2-0 first-half lead, Jose Mourinho’s United looked dead and buried and it seemed like it could be four or five come to the end of the match and be a truly magical day for the blue side of Manchester. Celebrations had begun in the background, champagne was uncorked and confetti was prepared.

However, an inspired second-half performance from Paul Pogba helped to complete a comeback for the ages, as United won the game 3-2, denying City the satisfaction of lifting the trophy after a Manchester derby thanks to a Pogba double and a Chris Smalling winner in the second half. City, of course, still won the title, but it came a week later as United lost to West Bromwich Albion at home.

Before City became the super-rich behemoths of today, they were the plucky underdogs whose recent history involved yo-yo-ing between the divisions.

In 2002, City were newly-promoted to the Premier League and welcomed United for what would be the final derby at Maine Road before their move to what is now known as the Etihad Stadium. United were without suspended captain Roy Keane, and stand-in skipper Gary Neville had a day to forget as the visitors’ back four was terrorised by Shaun Goater and Nicolas Anelka as City triumphed 3-1.