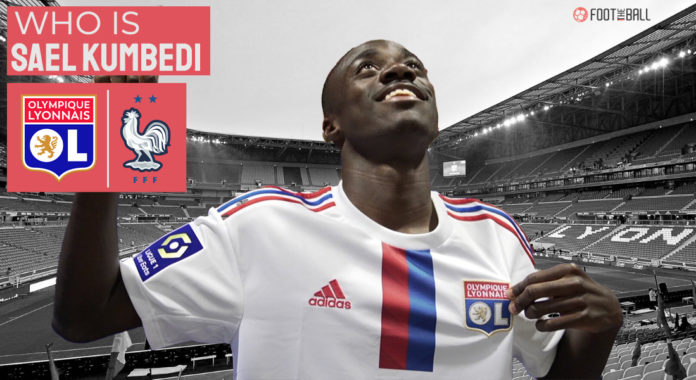 French football has always been renowned for developing some of the best talents in football. Lille’s Jonathan David, Lyon’s Rayan Cherki, Lorient’s Adil Aouchiche and Dango Outaara, PSG’s Warren Zaire-Emery, and Rennes’ Kamaldeen Sulemana, Reims’s Nathanael Mbuku, and Montepelleir’s Sepe Elye Wahi represent the pinnacle of Ligue 1 clubs’ prowess in developing young players. And the latest guy to join the party is Sael Kumbedi of Lyon. The 17-year-old has already carved a name for himself on the French football scene.

The teenager is a product of the Le Havre youth academy which has produced players such as Paul Pogba, Lassana Diarra, and Riyad Mahrez. And now they have produced this flying fullback who is being touted as a future star. This is why Lyon moved quickly to snap him up on a three-year contract.

So, who is Sael Kumbedi? And can he emulate Lyon’s other great players over the years?

Sael Kumbedi Nseke was born on March 25, 2005, and joined the Paris Saint Germain academy at the age of 10. The fullback spent the next three years in Paris before joining CC Tavermy in 2018. However, a year later, he would switch clubs again and arrive at Club Havre.

It is here that Kumbedi made his name as one of the top young prospects in France. The youngster made his way through the club’s system in his three years. It would finally end with a senior team appearance against Vierzon FC.

This story is really special.

In France's first game at the Euro U-17, a friend of mine sat next to a Bayer Leverkusen's scout.

Quickly, the two began to analyze the game together, and my friend kept telling him to look at Saël Kumbedi.

If you are being chased by a top club such as Lyon at the age of 17, then you must be unique. And Kumbedi is one such exceptional talent. The teenager has already made several appearances in Ligue 2 with Le Havre. During these matches, he has shown class and maturity well beyond his years.

Kumbedi is also a modern-day fullback and a perfect mix of offence and defence. In addition, he can also play on both flanks, further justifying his multifaceted talents.

Kumbedi has had experience on the international stage as well. The teenager was an integral part of France’s under-17 squad, which won the tournament. Playing in the final against host Israel, France were down by 1-0. However, the fullback would then add two quick goals to turn around the match. One of these goals was a brilliant solo effort showcasing his attacking brilliance despite being a defender. This shows us that he is the man for the big matches and can be relied upon when the team is in dire trouble.

🏆 Congratulations to France, the #U17EURO winners!

⚽⚽ They came from behind to beat the Netherlands thanks to a quick-fire double from right-back Sael Kumbedi in Netanya, Israel.@equipedefrance pic.twitter.com/nxFcQPcSNQ

It is still early in his career, but Kumbedi’s stats are still impressive. Last season, Kumbedi played 37.5 touches per 90 minutes. Out of these, he made 18.5 accurate passes per 90 minutes in his half. This was among the top 18 per cent of players in the league.

As young as they get. Here are top 10 youngest Premier League goal scorers ever

Before the start of the season, Lyon paid €1 million to Le Havre for Sael Kumbedi’s services. For now, he has been sent to Lyon’s reserve team. However, it is essential for him to keep up his development, and with a season or two under his belt, a senior team call-up is not far.

In Malo Gusto, Lyon currently have one of the best young right-backs in the league. Gusto has been part of Lyon’s youth team and is presently their undisputed starter. However, a top club will come for him sooner than later with his talent. And if they manage to keep him for two more years, then they could have Sael Kumbedi ready to fill the spot left by Gusto. And with Lyon’s track record, Kumbedi has a high chance of becoming one of France’s future stars.