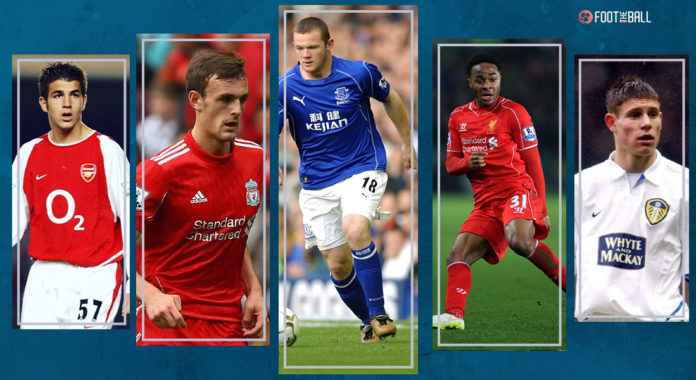 When Ethan Nwaneri made his debut for Arsenal at the age of just 15 years and 181 days, setting a Premier League record, the football world took notice. He took over the previous record set by Harvey Elliot when he made his debut at the age of 16. Many young players often get lost in the hype created around them after they make an appearance at such a young age.

Out of these players, only a few have gone on to score at such a tender age. The presence of star and experienced players make it tough for the youngsters to break into the first-team let alone scoring for their respective teams. However, times have changed and many starlets have been successful in doing so and they have gone on to score in the Premier League. Unsurprisingly, they find themselves in the exclusive list of the youngest ever goalscorers in Premier League history. FootTheBall takes you through the 10 youngest goalscorers in Premier League history.

James Vaughan is the youngest scorer in the history of the Premier League. His first strike came on April 10, 2005, in Everton’s 4-0 thrashing of Crystal Palace. Vaughan replaced Gary Naysmith in the final 15 minutes of the game and opened his account at the age of 16 years, 08 months and 27 days. He was set up by Kevin Kilbane for a close-range strike as he displaced Wayne Rooney as Everton’s and James Milner as the Premier League’s youngest goalscorer respectively.

Milner scored his first goal in 2002, in a 2-1 triumph for Leeds over Sunderland on Boxing Day. Being the consummate professional that Milner is, he has been able to play at the highest level for 20-years and according to recent comments made by Jurgen Klopp, he has no intention of stopping anytime soon.

Given he’s fast approaching the 600 appearance mark, you never know, he might have Gareth Barry’s record in sight.

Wayne Rooney is one of the youngest goalscorers in the Premier League and is a legend of the league as well. He has made the place his own in the top three in the league and netted his first goal for the Toffees at the age of 16 years, 11 months and 26 days.

The Spaniard is considered one of the best midfielders in the Premier League history. He dominated the competition during his eight-year stay at Arsenal and before replicating it with Chelsea. Cesc Fabregas’ first goal in the league came against Blackburn Rovers in a comfortable 3-0 win in 2004. The Spanish midfielder was aged 17 years, 3 months and 21 days at the time, making his Arsenal’s youngest ever scorer.

It took the one-time Ballon d’Or winner just 15 minutes to score from the bench on his debut for Roy Evans’ Liverpool side against Wimbledon in 1996. One of the best teenage players of all time went on to score 157 more times on Merseyside before spells with the likes of Real Madrid and Manchester United. Owen also bagged 40 goals for England.

He’s one of the greatest forwards the country has ever produced. If only he hadn’t suffered with consistent injuries which diminished his once mesmerising powers. Owen now regularly features as a pundit on BT Sport covering Champions League fixtures.

Way back in 1992, the very first year of the Premier League, Turner scored for Spurs in a 2-1 victory against Everton. He went on to play 21 times for the club, before injuries took their toll, leading to Turner finishing his career in the non-league.

He is now head of coaching at Welsh Premier Division team- Cefn Druids.

Macheda came off the bench to score the winner for Manchester United against Aston Villa. He was 17 years, 07 months and 14 days when he scored the goal against the Midlands club.

The Sheffield teenager needed just seven minutes in his Premier League debut to become the youngest scorer for the club in the competition’s history. Jebbison was 17 years, 10 months and 5 days old when he netted against Everton on May 16, 2021. He is also the league’s youngest player to net a goal on their first full start.

It was clear Liverpool’s second-youngest debutant was going to be a star. He scored his maiden Premier League goal in a 1-0 triumph over Reading at Anfield in October 2012.

The England international was one of Brendan Rodgers’ key players. In the Reds’ title challenge in 2013-14, most reminisce about Luis Suarez and Daniel Sturridge’s lethal strike partnership, but Sterling was also crucial in a side that scored the most goals by a Premier League runner-up (101).

At Manchester City, Sterling continued to go from strength to strength under Pep Guardiola. Although, following his compatriot Jack Grealish’s arrival, Sterling decided to sign for Chelsea and has started life at Stamford Bridge in fine fashion.

Chelsea picked up Forssell in 1998, signing him on a free transfer from HJK Helsinki. In just his second appearance for the club, Forssell found the back of the net in a 4-2 FA Cup victory over Oxford United. Fast forward three weeks and he had his first Premier League goal, this time against Nottingham Forest.

But despite his strong start to life in London, game time soon became difficult to come by and Forssell spent much of his career out on loan, before moving to Birmingham City permanently in 2005.

The Finnish international retired in 2017 as the country’s second highest goal scorer and now works in the youth set up for HJK Helsinki.