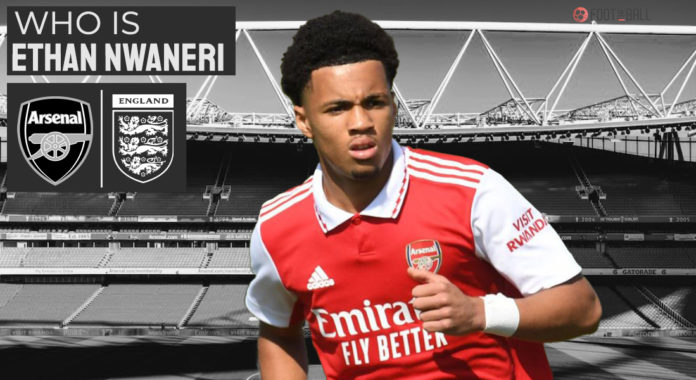 15 years 181 days. What were you doing when you were 15 years old? Unless you were making first-team appearances for the Premier League leaders, Ethan Nwaneri is ahead of you.

After that slightly demoralising stat, it is time to understand what a huge record Arsenal’s Ethan Nwaneri has created. After coming off the bench against Brentford, Ethan Nwaneri became Premier League’s, and by extension, Arsenal’s youngest-ever debutant.

So, who is Ethan Nwaneri? And is this appearance just for the sake of a record? How good is he? We try to answer.

Who is Ethan Nwaneri?

Ethan Nwaneri is a 15-year-old Arsenal academy player who plays as an attacking midfielder. Still signed on schoolboy terms (Players can’t sign professional terms till they’re 16), Nwaneri has been starring for Arsenal U18s this season. Furthermore, Nwaneri had already been playing U18s football at the age of 14. Seeing through that lens, his first-team appearance for Arsenal at age 15 is not even a surprise!

All the talk of Ethan Nwaneri’s potential is useless because his accomplishments speak for themselves.

It can’t be stressed enough how big of an achievement it is to turn out for Arsenal’s senior team while still being on schoolboy contract terms. Nwaneri came on against Brentford and the biggest compliment that can be paid to him is that he didn’t look like a boy amongst men.

To look that calm and composed in senior football at just 15 shows the sky is the limit for him. Mind you, this is the same Brentford team whose proactive pressing game had Manchester United looking to the heavens en route to a 4-0 loss.

Manager Mikel Arteta has widely sealed his place as one of the best young managers in world football and he is always keen to give youngsters a chance, just like Arsenal gave him a chance. Therefore, Nwaneri can expect to make intermittent appearances like these throughout the season.

Nwaneri regularly trains with Arsenal’s first team already and training with the likes of Odegaard, Saka and Jesus will only help accelerate his development.

Of course, the shining stat that has already gone down in history books is his appearance in Arsenal’s first team. However, his rise had been a long time coming. Using “Long-time coming” for a 15-year-old might seem silly, but that’s how good Nwaneri has been in kids’ football.

In just nine appearances for Arsenal U18s, Ethan Nwaneri has four goals and four assists. He has even turned out for Arsenal U23s in Premier League 2, looking as unfazed and composed as ever.

By the time the season ends, expect Nwaneri to have close to double figures in appearances for Arsenal’s first-team and take another record to his name- youngest goalscorer.

Arsenal’s academy has been, for a long time, likened to UK’s La Masia. The attackers that come through the academy are blessed with skills and poise on the ball.

Be it Smith-Rowe or Saka, Arsenal’s youngsters get taught to be effective on the ball from a young age. The freedom to express themselves while being in a successful structure is the key learning component every kid is taught in the academy.

Nwaneri plays with the same guile and combines it with a composure that belies his age. Eight goal contributions in nine games for U18s speak of a player who knows when to pass, how to pass, and more importantly, how to make use of spaces on the pitch. Moreover, he is a manager’s dream in the sense that he can play across the frontline, behind the striker, and even as a makeshift striker in a False 9 role. With some bulking up, his calmness on the ball and ability to pick out progressive passes can even be used deeper on the pitch.

Such an understanding of the game at just 15 shows that sky is the limit for Nwaneri. Clearly, Arteta thinks the same. With the pace at which Nwaneri has been shattering records, expect more to tumble as the season breaks. In a few years’ time, the game against Brentford will be remembered as the day a star was born.