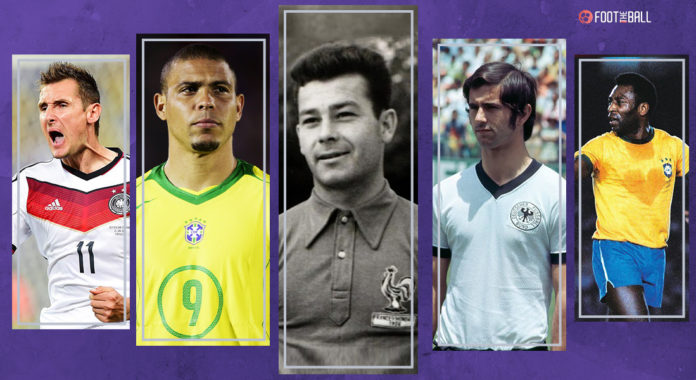 As a competition that traces its roots back to 1930, not many sporting events do trips down memory lane quite like the FIFA World Cup. The history of the World Cup, like history itself, is written by the winners, and you won’t lift the most prestigious trophy in sports without a bonafide goalscorer. So who are the FIFA World Cup top scorers of all time? FootTheBall have you covered!

Though far from the most famous name on this list, what made Klose special was his staggering consistency at every football World Cup he played and his longevity in the game, which enabled him to play four different editions. He was 36-years-old during his last World Cup in Brazil in 2014.

Miroslav Klose scored a hat-trick on his FIFA World Cup debut in 2002 as Germany drubbed Saudi Arabia 8-0 in their group opener at the Sapporo Dome in Japan.

In what was a perfect swansong for the ace striker, he contributed two goals during Germany’s FIFA World Cup trophy-winning campaign at Brazil in 2014. The goal which handed him the record for most goals scored in the FIFA World Cup came against Brazil in the semi-finals as the German team stunned the hosts 7-1.

His next appearance came at the 2002 World Cup, with the superstar picking up the Golden Boot with eight goals in seven games, including both strikes in the 2-0 final victory over Germany in Yokohama in which he won the man of the match award. Forming a lethal attack alongside Rivaldo and Ronaldinho, Brazil’s success in the tournament never looked in doubt.

Despite finishing as the top scorer in the CONMEBOL qualifiers for the 2006 World Cup with 10 goals, there were question marks over Ronaldo’s fitness and physical state ahead of the tournament. He ended with three goals in five games before Brazil’s exit to host nation Germany in the quarter-finals, taking his overall tally in World Cup final tournaments to 15.

For 32 years, Gerd Muller held the record as the World Cup’s all-time leading scorer. He managed the feat despite only playing in two World Cups. In 1970, he recorded a ridiculous return of 10 goals in six games.

In 1974, he helped West Germany win the title by scoring four goals in seven matches, including the match-winning goal against the Netherlands in the final. With a career total of 735 goals from 793 matches, “Der Bomber” is one of the most prolific goal scorers of all time.

Like his name, Fontaine was Just phenomenal in front of goal at the World Cup. He is only the second player to get on the World Cup all-time top scorers list after playing in just one FIFA World Cup.

Fontaine was one of the stars of the 1958 edition, scoring 13 goals for France in just six matches. His goals were not enough to take France all the way, but he did lead them to a third-place finish. He remains the only Frenchman in the top ten and it will require something remarkable to beat this record at the global fiesta.

Fontaine’s incredible scoring run at the 1958 World Cup in Sweden was perhaps overshadowed by the emergence of one 17-year Brazilian, Pele.

Even though he was recovering from a knee injury when the 1958 FIFA World Cup started, the teenager made the Brazil squad. He didn’t play in Brazil’s first two games but made his World Cup debut against the Soviet Union in the final group fixture, making him the youngest player to play a World Cup match at the time.

Pele didn’t score on debut but managed an assist. The soon-to-be Brazilian great opened his tally with a match-winning goal against Wales in the quarter-finals, making him the youngest player in history to score in a FIFA World Cup match.

In the semi-finals, against Fontaine’s France, Pele proved to be the difference with three goals, which made him the youngest player to score a hat-trick in the quadrennial meet.

After his six goals on his debut World Cup, Pele helped Brazil win two more titles in 1962 and 1970, with only England denying the Selecaos in the 1966 edition. Pele chipped in with six more goals and finished with 12 goals in 14 matches across four editions, placing him fifth on the list of most World Cup goals. Though he never won the coveted Golden Boot in any of the editions, no other player in the history of football has managed to win the World Cup thrice like Pele did.

Sandor Kocsis is one of Hungary’s all-time greatest players. The striker scored all of his 11 goals in the 1954 World Cup, guiding them to the final. He played five matches to score 11 goals at a rate of 2.20 goals per game. He further has a record of scoring 75 goals in 68 appearances for Hungary.

Klinsmann made a scoring debut in the World Cup, as West Germany defeated Yugoslavia 4-1 at Italia 90, before adding further goals at the tournament versus the United Arab Emirates and the Netherlands.

The 1994 World Cup in the USA was his most successful in front of goal, scoring five goals in five games before the Germans exited the tournament at the quarter-final stage in a shock defeat to Bulgaria. Had they gone further, there’s a good chance Klinsmann could have got the two goals needed to surpass both Hristo Stoichkov and Oleg Salenko, who shared the Golden Boot at the tournament with six goals each.

His final World Cup tournament came in 1998 when the German striker scored three goals at the age of 34 – his 11th and final World Cup goal coming against Mexico in a 2-1 victory.

With 10 goals in 10 games, Helmut Rahn boasts one of the best World Cup strike rates of all time. However, none were bigger than the two he scored in the 1954 World Cup Final against a Hungary side that hadn’t lost a single match in four years.

Former Barcelona star Gary Lineker, who is now making a name for himself as a football presenter on television, is one of the best players to come out of England.

He made his England debut in 1984 and ended up with 80 caps and 48 goals to his name. Lineker won the World Cup Golden Boot in the 1986 edition.

Argentina’s legendary striker, Gabriel Batistuta is the final entry on the list with 10 goals in the FIFA World Cup. The forward played 12 matches to achieve the feat. He also participated in three different editions of the tournament (1994, 1998 and 2002).

Not many are close to breaking into this great hall of fame, with Germany’s Thomas Muller one of the very few to cross the magic number 11 mark. The Bayern Munich star can do so, with his team participating at the Qatar 2022 World Cup.

The German international has scored 10 goals in 16 World Cup appearances so far, including five in six appearances at the 2010 tournament in South Africa, where he not only won the Golden Boot, but also picked up the Best Young Player award at the finals.

After Muller, the trio of Cristiano Ronaldo, Luis Suárez and Lionel Messi could also be looking to break into the ‘double-figures club’ for World Cup goals at the 2022 tournament.

The comforts of home