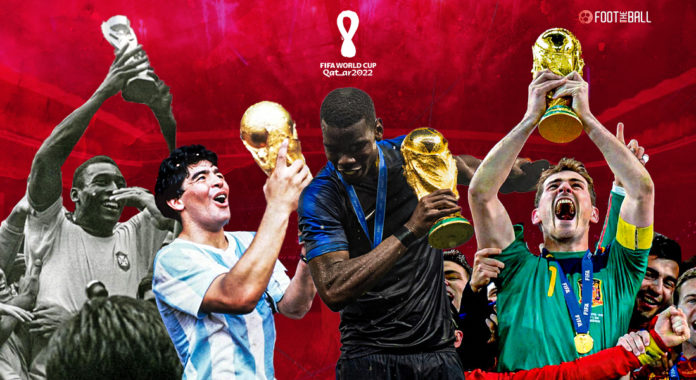 The 22nd edition of the FIFA World Cup is approaching and the biggest festival in world football has everyone excited. World Cup is a tournament with a storied history. Numerous teams and players have etched their names in the annals of history with decorated performances in the World Cup. The 2022 World Cup in Qatar promises more of the same.

So, here is the most comprehensive celebration of history as we create a FIFA World Cup winners list, along with world cup winning captains, managers and the unfortunate runner-ups.

Here are the most frequently asked questions about the FIFA World Cup.

Q- Why is the World Cup every 4 years?

The FIFA World Cup is held every four years to ensure that there is enough time to finish the qualification process. Moreover, it gives the host nation time to prepare for such a marquee event.

Q- How many countries have won the FIFA World Cup?

So far, eight national teams have won the FIFA World Cup, with Brazil winning it the most number of times, with five. Other seven teams are- Italy, Spain, France, Germany, Uruguay, Argentina, England.

Q- Who is the highest goalscorer in FIFA World Cup?

From the creators of #Jabulani and #Telstar comes…#AlRihla!

The official match ball for the @FIFAWorldCup 2022 in Qatar is all about speed and will certainly be the most unique in the tournament's history🤩#WorldCup2022 #FIFAWorldCup https://t.co/AEDtgobNY3

Q- How many teams participate in the World Cup?

Q- Why is the Qatar World Cup being held in winter?

It is because the weather in Qatar makes it impossible to play football in summer. Read more about why the 2022 World Cup in held in winter here.

Q- What is the Qatar World Cup schedule?

The World Cup kicks off on 21st November and the final will be played on 19th December. The full FIFA World Cup 2022 Qatar schedule can be found here.