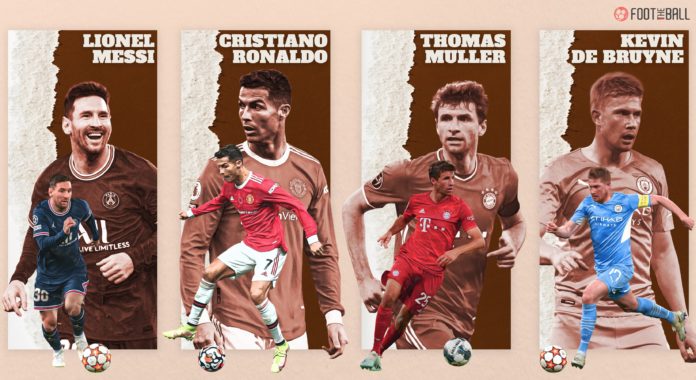 Football is all about the goals. Or so it is said. While the obsession with goals is never-ending, the game is incomplete without the other aspects. One of the key areas is the assists department and it is a top one in football.

What is xT and how has it become an important metric of the game?

The moments before the goal, the important passes or the accurate deliveries. While it may sound simple, making assists is a very important area of attacking play. Even the leagues and governing bodies have started recognizing it as a vital aspect of a football match.

Lisandro Martinez has been an astute signing for Manchester United, but how will it work out?

In that regard, there are some exquisite players who have the privilege of most assists in top level football. FootTheBall brings the list of 10 heralded names who are the peak of goal-making powers.

The Manchester City attacking midfielder has been of the best creative forces in European football currently. De Bruyne is the engine room of the serial Premier League winners. His poise on the ball and visionary passing has unlocked all defences.

De Bruyne registered 20 assists in the 2019-20 Premier League season. That saw him join Thierry Henry as the two players with the most assists in a single campaign. De Bruyne is the chief playmaker of Belgium and Manchester City who is only getting better. He will surely end up in the top five of assists providers list in football.

The former Bayern Munich stalwart was a favourite of the fans in Bavaria. Franck Ribery was an absolute menace down the left flank with crime partner Arjen Robben on the other wing.

The “Rob-Bery” duo were lethal for opponents, and Ribery was a major supplier of dominance. Bayern Munich’s current decade of dominance started with Ribery as a centre-piece. Moreover, he could also chip in with gaols whenever needed which only enhanced his value.

The current Barcelona boss was one of the sharpest passers in the game, who ran the show from the middle of the park. The Busquets-Xavi-Iniesta troika was legendary and remains one of the best-ever in the game.

Xavi was a masterful passer who could produce magic out of thin air. He continued his marauding ways with Al-Sadd, where he become a revolutionary player-manager. Moreover, Xavi was also at the centre of Spain’s era of dominance from 2008-2012.

One of the sharpest players in the game ever since his rise as a teenager. Fabregas was a fan-favourite with Arsenal, before winning it all with Barcelona. Fabregas continued enhancing his reputation with a magical spell at Chelsea.

He remains the second-highest assists provider in the Premier League era after Ryan Giggs. Fabregas spent the past few seasons with Monaco, and joined Como in 2022.

The German playmaker has stirred up more controversies than assists in recent times. However, he remains one of the deadliest passers of the ball in world football on his day.

Ozil was unstoppable when on song, with an unmatched eye for passing and doing things that were virtually impossible. He has the second-highest number of assists in a Premier League campaign with 19.

Moreover, he holds the record for the most number of games with three assists (8). Ozil has signed for Istanbul Basksehir as he looks to get his career back on track. However, Ozil remains one of the top assists providers in football.

The angel with a golden left boot. It was Di Maria whose lone strike in the Copa America 2021 final clinched La Albiceleste’s first international trophy in years. The newly minted Juventus signing has been one of the most consistent performers in the game.

Di Maria has produced goods across two lengthy spells with Real Madrid and PSG. Playing down the right flank, Di Maria could effortlessly bamboozle defenders before cutting inside. That remains one of the simplest but clever moves in the game. He’ll be looking to add to his tally at Juventus.

Age is just a number for the Portuguese legend who is not slowing down. Ronaldo is the top scorer in the history of international football. He has led the Selecao to two pieces of international silverware- Euro 2016 and the Nations League.

If Ronaldo does end up leaving Manchester United, here are the possible replacements

Despite being a striker who is known for goals, Ronaldo is no slouch in setting teammates up. He started his career playing on the right wing, before making the switch. Though the output of assists has decreased, Ronaldo can still open up defences on any day.

One of the most underrated players in the history of the game. It’s a crying shame that Suarez is from the era of Cristiano Ronaldo and Lionel Messi. Otherwise, a couple of Ballon d’Or would surely have been in his cabinet.

Luis Suarez remains one of the best players ever to not win a Ballon d’Or. The list is eye-popping

Suarez can do everything and more needed of an out-and-out striker. Moreover, he also excelled as a part of a fluid front three as the versatile MSN took flight.

Suarez won it all with Barcelona before his unceremonious exit. However, he had the last laugh as Atletico Madrid won the La Liga title in his first season as Suarez contributed heavily.

The modern-day Raumdeuter is the heartbeat of Bayern Munich. Loud, vocal, full of expressions, and extremely good at his job, Thomas Muller has been a name etched in Bayern’s history.

The German attacking midfielder is the number one partner with all the recent strikers in the club’s recent past. Mario Mandzukic, Mario Gomez, Ivica Olic, and Robert Lewandowski – all had Muller behind them.

He is ageing like fine wine, racking up 15+ assists every season. There is no doubt he will be remembered as one of the greatest players in his position. One of the top assists makers in football ever.

The six-time Ballon d’Or winner is way ahead of his peers. Messi is the top assists provider in football history.

That is due in small part to being at the top of the game for almost two decades. Messi and Barcelona were unstoppable during their heydays, with a superb supporting cast every time. Messi could make your jaw drop, and then do it again, before you could pick it up.

The man gas even racked up an assist from a penalty! Messi remains the greatest in this department, and more are on the way with PSG.