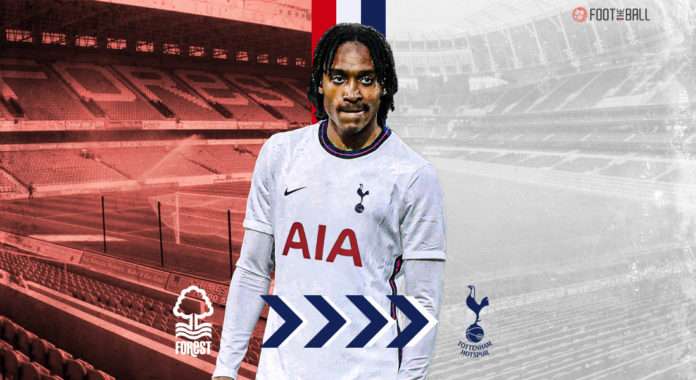 Tottenham Hotspur appear to have their wingback business settled, and while Fabio Paratici and Antonio Conte went and got a proven winner on the left side in the name of Ivan Perisic, the scattergun has hit a bullseye on a much younger target for the right flank.

Despite showing glimpses of promise during the 2021/22 pre-season at Middlesbrough, Neil Warnock allowed Djed Spence to leave the club on a season-long loan to Nottingham Forest.

Spence started his football career with South London side Junior Elite where he played alongside Arsenal’s Emile Smith Rowe. He then moved to Fulham’s academy, before joining Middlesbrough in the summer of 2018 at 17 years of age. The right-back quickly grabbed the eye and started showing his exciting talent and potential.

Since he moved to the City Ground on loan, Spence relished his new role at right-wingback under Steve Cooper. He demonstrated his quality and consistency throughout the 2021/22 league campaign, and ended the season playing the 5th most minutes and matches in the Championship, and the 1st among fullbacks.

Middlesbrough meanwhile, who already have a top-quality right back in Isaiah Jones, have happily cashed in on Spence for around £20m to Tottenham Hotspur. But will the young Englishman be good enough to make the cut in the Spurs squad under Conte? FootTheBall take a look at exactly that.

The young Englishman is a very dynamic, energetic and forward-thinking right-wingback. Spence is as direct as they come, constantly on the attack and looking to push his side up the field. The 3-4-3 system under Conte will give him the freedom to patrol up and down the flanks and act as his team’s primary attacking force from the right side of the pitch.

Spence’s wing-back role can be a withdrawn one, with movements that mirror many of what the top possession-oriented sides do. It isn’t all about movement in behind but is about also dropping short enough to multiply the possibilities around the ball-holder and stretch the space between the lines.

What he does with the ball then can be a little stunted, though, as he doesn’t have the finest array of passes in his locker, here. Half impacted by a lack of thinking before receiving, Spence doesn’t react or play to runs ahead of him quickly enough. With the extra time needed to get his head up, and the skewed vision he has as a result, he can often miss the need to play the simple pass inside or backwards.

Spurs’ signing of Bissouma under Conte has a lot of similarities to the Italian signing Kante at Chelsea in his first season. Here’s why!

His tendency to ball-watch is also prevalent when turnovers occur on the opposite side, as he’s then often a few seconds slow of reacting appropriately by getting back goal-side of the attackers who target the exposed space down his channel. Thankfully for him, his blistering recovery pace have seen him get away with this.

In general, Spence is very good at receiving and controlling the ball, then driving at his opponents. He likes to isolate the opposition full-back, beat his man and ping crosses into the box. Spence does not make many runs in behind but prefers to receive the ball to his feet and assess options ahead of him.

From a physical standpoint, the wing-back is surprisingly good in the air. This comes more down to his spring, though, since his physical tussles are usually one-sided – both offensively and defensively.

Essentially, his primary strengths are his ball carrying and dribbling, as well as his physicality and ability to shield the ball from defenders. Spence ranks in the 100th and 97th percentile in progressive runs and dribbling respectively. He completed more dribbles (76) than any other defender in the Championship 2021/22 season. He also engages in a lot of offensive duels, 11.59 per game, ranking in the 97th percentile among fullbacks.

Attack-wise, Spence scored 2 goals and supplied 4 assists in 45 league games. He ranked 5th in expected assists and 10th in actual assists among all players. He created 44 chances, made 40 key passes and took 27 shots, a rather high amount for a fullback. In addition, he has a 77.7% passing accuracy and 34.2% crossing accuracy, mainly due to the high number of passes attempted into the final third, but it is an area of improvement moving forward.

Spence does not engage in many aerial and defensive duels, 2.2 and 5.98 per game respectively. He was able to make 5.14 interceptions per game, 69 in total, due to his pace, energy and physical presence.

The right-wingback had been undroppable in the 2021/22 season for Nottingham Forest, regarded as one of the standout players in the league. Spence played a vital role in Forest’s promotion-winning side. He was consequently nominated for the EFL Young Player of the Year award and was featured in the EFL Championship Team of the Season.

Now this will be fun. Comment 👇#Haaland #Nunez #Richarlison pic.twitter.com/37si6V0sgu

The speed he has on offer is almost under-utilised at times, with and without the ball. He sometimes misses chances to cut in through a gap on the run, and, off the ball, he could be a far more potent threat if he was more willing to commit to run-making. As things are now though, he isn’t yet a prolific box threat.

What still holds him back after beating his man, however, is the lack of awareness that remains. Spence is not one to constantly lifts his head mid-dribble to see what’s on, so it’s usually hard to get a pass or cross out of him early or when there’s a slight opening during his ball runs.

His relentless energy and pace allow him to fool opponents into thinking they have time and space to move or pass the ball into. But out of nowhere he pops up and intercepts the ball or cuts the pass being played.

The defensive side of Spence’s game is a bit alarming and currently sheds a bit more cause for concern, mostly due to lapses in concentration. He’s a very passive figure during counter-presses, as he’s rarely directly onto an opponent nearby, instead leaving himself planted and ball-facing without enough awareness for the opponents exploiting the vacant space behind him.

Like every young player, Spence has some weak points and areas that require improvement. Most notably his awareness without possession, defensive positioning and sometimes poor decision making.

Ultimately, Spence has the capabilities of a modern, possession-based wingback. This potential will only flourish under the proper coaching and system which will also benefit his defensive positioning, awareness and forward execution.

At Tottenham, he will arguably be under the guidance of one of the world’s best in Antonio Conte; a master of the three at the back who will instil the discipline and attributes required to become a top wingback in Spence. Spurs’ system fits Spence like a glove, showcased by the freedom Matt Doherty and Emerson Royale enjoyed on that side of the pitch in the 2021/22 season.