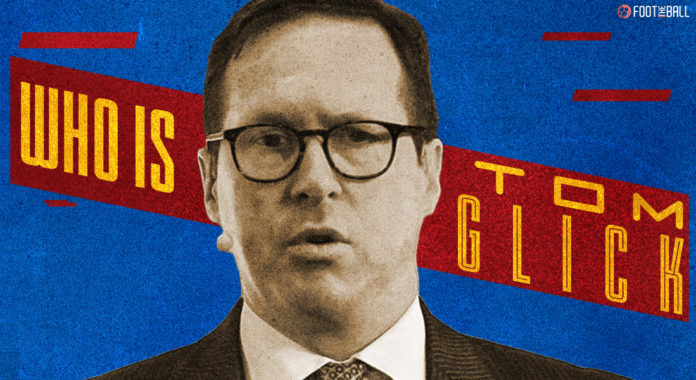 Chelsea have been one of the most interesting clubs to observe in the 2022 summer transfer window. They have already signed Kalidou Koulibaly and Raheem Sterling, but there’s been something even more impressive.

Co-owner Todd Boehly is leading negotiations ever since the takeover, with Marina Granovskaia being let go. Therefore, it is a certainly a commendable feat that an MLB team owner is on the front foot in the transfer market.

There was much speculation as to who would eventually fill the top role, and it has now been revealed. Chelsea have appointed Tom Glick as their new “President of Business.”

That is definitely a title that you not hear often, so who is Tom Glick and why has been chosen to lead the new era of the Blues?

Who is Tom Glick?

According to the official announcement, Tom Glick is a “sports marketing and operations executive” with over 30 years of experience. While his immediate role may be unclear, what  it essentially translates to is top dog.

Glick will take on virtually all of the facets that come with running a football club. His most recent job was President of NFL side Carolina Panthers, where he oversaw major redevelopments to the Bank of America stadium.

Moreover, he has had extensive experience in the footballing world. Glick was instrumental in the creation of the new MLS franchise Charlotte FC. Before that, he had also served as a director at New York City FC before switching over to the City Football Group as Chief Commercial Officer.

Will Raheem Sterling keep scoring as usual at his new home? All the signs say yes!

Additionally, he had also been Chief Executive of Derby County during Mel Morris’ reign as owner. Incredibly, Glick has also dabbled in basketball and the governing bodies of football. He was the senior Vice President and Chief Marketing Officer for the Brooklyn Nets in the NBA.

Among his board positions, he has hold roles at the English Football League Board, FA Council, and the Professional Game Board. Therefore, it is really clear how high the ambitions of Todd Boehly and co. are to get a man of his experience in the side.

What will be his role?

Though he is yet to begin, Cheslea’s official statement continued,

All of it means Glick will become the most powerful man at the club. He will be tasked with increasing the brand value of the club, alongside overseeing the renovations to Stamford Bridge.

Chelsea’s fortress has been in need of redevelopment for a while, with Roman Abramovich having also tried. Moreover, the Chelsea Women’s team has been making major waves under Emma Hayes, and Glick will need to keep the momentum going.

"… and help lead our commitment to strengthen the Club through investments in squad additions, infrastructure, technology, the youth academy, and the Women’s Team."

Making the women’s team gain even more popularity around the world will be major goal. Furthermore, another main thing that Glick will be focusing on is getting the fans more involved.

While that may take a number of shape as to what is eventually planned, there is no doubt these are exciting times. The vision of the American ownership is not only restricted to the footballing aspect.

Chelsea have been heavily linked with Neymar, but could the Brazilian superstar really end up in England?

They are trying to build a multi-faceted sports brand, which has a presence around the world. Tom Glick will be a key force in all of it.

The future of Chelsea is clearly in safe hands of people who really want it to prosper. Tom Glick’s words echoed those sentiments,

“I have been very impressed with the vision and mission of Todd Boehly and Clearlake. They have the Chelsea community at the heart of everything they do. We have a huge opportunity here to enhance performance across the board, on behalf of everyone we serve.”

Indeed, there is no doubt that Glick will be a big multitasker. He will oversee major investments in the youth squad and infrastructure, which has been vital for the club.

Cobham Academy has been one of the best in the country over the years, producing top talents. In terms of the first-team. Chelsea are trying to sign Jules Kounde and Presenal Kimpembe. Tom Glick will be expected to immediately jump onto those deals and conclude as soon as possible.