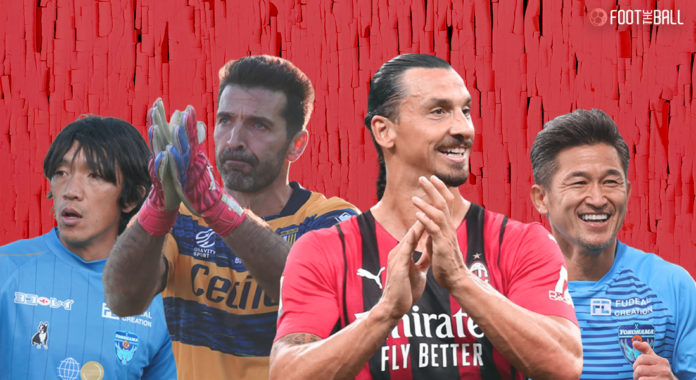 Football is a young man’s game? Well, that notion is as outdated as snorting cocaine on the touchline.  Nowadays, players playing into their late-30s and early-40s is no big deal. In fact, Zlatan Ibrahimovic is soon-to-be 41 and is staying with AC Milan till at least 2023.

The self-proclaimed lion of the game is a bodily marvel who is showing no signs of slowing down. However, Ibrahimovic is still not old enough to make the top-three in the list of the oldest active footballers right now.

FootTheBall counts down the absolute veterans of the game who are defying the ravages of time effortlessly.

One of the rare centre-forwards on this list, Molina is starring with Granada since 2020. The former Real Betis and Elche star won the Pichichi Trophy in the Segunda Division back in 2010 with the latter.

Moreover, Molina is also the oldest-ever league goal scorer for Getafe and was on target as Granada defeated Barcelona at the Camp Nou in April 2021. There is no slowing down Molina as he aims to get Granada back up to La Liga in 2023.

The beloved Spanish star who has made countless memories wherever’s he has played. Joaquin rose to fame with over a decade-long spell split between Real Betis and Valencia.

The crafty winger has racked up almost 900 appearances over his career, which have included over a 100 goals.

17 years after the Copa del Rey trophy was guest of honour at his wedding, 40-year-old Joaquin wins it again with Real Betis! 🏆 pic.twitter.com/GF7B87K1Lw

Joaquin returned to Betis in 2015, leading them to Copa del Rey victory in 2022. The veteran captain is still an important part of the furniture, often brought off the bench to impact games.

Paraguay’s greatest-ever player, Santa Cruz has won as much as he journeyed over his career. The striker made his name with Paraguayan powerhouse Olimpia, before a masterful showing at the 1999 Copa America.

That earned him a move to Bayern Munich, where he won five Bundesliga, four DFB-Pokals, and the 2001 Champions League titles. Since leaving in 2007, Santa Cruz has played in England, Spain, and Mexico, before returning to Olimpia in 2016.

Furthermore, Santa Cruz has also amassed over a 100 caps for the national team and is their record goal-scorer with 32 goals.

The former Real Madrid, Villarreal, and AC Milan goalkeeper is still going strong in Spain. Lopez had been with Espanyol since 2016, before joining Rayo Vallecano in 2022.

The 2014 UEFA Champions League winner was famously made first-choice under Jose Mourinho, relegating club legend Iker Casillas to the bench. Lopez is an astute figure in goal, who still has the hallmarks of a great goalkeeper.

In 2020-21, he had the best season of his career statistically by conceding only 25 goals as Espanyol won the Segunda Division.

The big Swede has been one of the most enigmatic footballers since his debut. Ibrahimovic has played for the some of the biggest clubs in the world. The list includes Ajax, Inter, Barcelona, Manchester United, PSG, and LA Galaxy.

Zlatan Ibrahimović, set to sign a new contract with AC Milan in the next days. New deal will be valid until June 2023, salary around €1/1.5m net guaranteed plus add ons depending on his performances. 🔴🇸🇪 #ACMilan

He will turn 41 in October – never ending Zlatan. pic.twitter.com/hqyEoJLH88

Moreover, he is also Sweden’s record goal-scorer with 62 strikes. Ibrahimovic is one of the most decorated players in the game, and has never been one to not talk about his impressive feats.

His return to AC Milan galvanized the side as they finally recaptured the Scudetto in 2022 after 11 years. There’s a special bond between club and player which is set to continue blossoming.

The Nigerian star is the current captain of Kano Pillars FC who were relegated form the Nigerian Professional Football League in 2021-22. Rabiu Ali has been with the wide since 2011, winning three league titles.

Moreover, he was with the Total Pillars before this spell. Ali has also represented Nigeria at the international level, making 18 appearances and scoring five times.

The only player on the list who has an asteroid named after him. Shunsuke Nakamura is one of the greatest Japanese footballers ever. He is also one of the most successful ones in Europe.

Nakamura started his career with Yokohama Marinos, before the most memorable spell with Celtic in the mid-2000s. Nakamura was nominated for the 2007 Ballon d’Or, before winning the Scottish Player of the Year and the SFWA Footballer of the Year.

Moreover, Nakamura was also the first Japanese player to score in the UEFA Champions League. He is a two-time AFC Asian Cup winner, and is currently with Yokohama FC in the Japanese second division.

The indomitable goalkeeper who has seemingly been around forever. The Bianconeri legend had an epic start to his career with Parma in the late-1990s. Buffon won the UEFA Cup and Coppa Italia, before Juventus signed him for a record-fee in 2001.

Buffon remains one of the best players to not win the Ballon d’Or, alongside many superstars

He would spend 17 years with the Old Lady, winning 10 Serie A titles and five Coppa Italias. Furthermore, Buffon has been a three-time runners-up in the UEFA Champions League.

Probably the most well-known aged player right now, Miura is still rumbling along with no signs of stopping. He is the oldest goal-scorer in the J.League, and began his career in 1986.

Miura has played a number of clubs over the years, and he is currently with Suzuka Point Getters in the fourth division of the Japanese footballing pyramid.

Miura is known for superb goal-scoring abilities, and has been heralded as ‘King Kazu’ over the years. He has made over 700 appearances at club level, to go with 89 caps and 55 goals on the international stage.

The most recent entry in the list due to the Guinness World Records officially recognizing him. Carmona is an Uruguayan native, who has never played at the top-level. He has been playing for 45 years and has represented 30 clubs.

Carmona has made almost 2,200 appearances, and has already spoken of prolonging his career as much as possible.

He is a centre-back by trade and is currently playing for Hacele Un Gol A La Vida in the Uruguayan fourth-division. The club also doubles up as a community project, giving a platform to footballers aiming to break through.