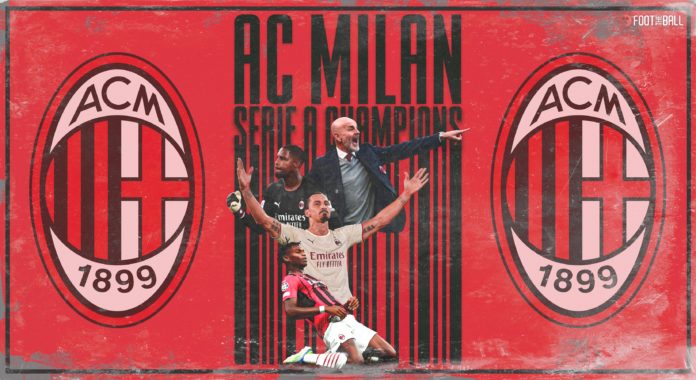 Also read: Heroes of Milan’s last title win, where are they now?

It has been 11 years of pain, of false starts, of watching Hachim Mastour and M’Baye Niang. Finally, though, the Nerazzurri, who kept faith can celebrate the title of being Italian champions once again with a win over Sassuolo, which saw them finish two points ahead of rivals Inter.

It has been a drastic turnaround brought about in a very frugal and clever way that is rare in modern football. The changes have been on the field, in the dugout and in the boardroom and the whole club deserves credit for this success.

The man who has guided AC Milan to their 19th league title has been Stefano Pioli, a manager who is rarely talked about in the media. He came to San Siro in 2019 with a host of underwhelming spells at various clubs in Italy behind him. It was deemed to be an uninspiring appointment, one that would continue their “banter era.”

Pioli was nearly replaced by a certain Ralf Rangnick towards the end of the 2019-20 season but he was given another chance by the board. Last season saw them challenge Inter until February before their inexperience and poor squad depth got the better of them.

Revolution took time, but Pioli’s effect has been clear for a long time

He was once again backed by the board, with some astute transfers, and their 2021-22 title win goes to show how a synergetic club can achieve major success with minimal, but strategic outlay.

The board has played a major role in the turnaround but it was the appointment of club legend Paolo Maldini as technical director in 2019 that was a specific inflection point in their fortunes. Maldini was the one who brought in Pioli and he was the one who backed him.

🎙️ Olivier #Giroud to L'Equipe: "It hurt me to see the club in this situation with #Juventus far ahead. In my humble opinion, when #Milan was not competitive, there was one person missing from the club, and that person is Paolo #Maldini." pic.twitter.com/cSIU1LaHCQ

AC Milan’s modus operandi shifted from buying have-beens like Kevin-Prince Boateng and Fernando Torres to investing in young players and grabbing bargains. Rafael Leao, Sandro Tonali, Alexis Saelemaekers and Franck Kessie were all bought at prices that in hindsight look excellent value for money, especially given the years of service they can still give to the club. Kessie, in particular, has been so impressive that he has been snapped up by Barcelona for next season.

Their long-term vision has been complemented with a desire for immediate success. The signings of Zlatan Ibrahimovic, Olivier Giroud and Simon Kjaer have given the squad experience and added depth. This title win has been over two seasons in the making, with Pioli and Maldini slowly moulding the side in their image, making the right moves with patience.

The men who did it

Milan’s title has very much been built on defensive solidity, especially since the turn of the year. They have conceded more than one goal on just two occasions out of 17 matches in 2022. The summer signing of Mike Maignan has been a massive steal – the Frenchman was arguably the best goalkeeper in Europe last season and he has shown that he isn’t just a one-season wonder.

Any club would have felt the loss of Gianluigi Donnarumma, but while Donnarumma struggles to become the undisputed No.1 at PSG, Maignan has gone from strength to strength this season.

Fikayo Tomori, signed on a permanent deal from Chelsea, has been immense, as has been 21-year old Pierre Kalulu. The two youngsters, along with Alessio Romagnoli, have made people forget the fact that club captain Kjaer has spent most of the season on the sidelines. Tomori’s signing has been a masterstroke by the astute management team at Milan.

Tomori was a steal for AC Milan, but selling him was a huge mistake by Chelsea, something even said at the time.

One of the biggest heroes of this season though has been Theo Hernandez. Fullbacks coming from Real Madrid have made a habit of dominating other leagues. Achraf Hakimi and Sergio Reguilon have both starred at their respective clubs.

However, Hernandez’s impact at AC Milan has been sensational. 11 goal involvements (five goals and six assists) in 30 games from the LB position tell their own story. However, his mere presence on the field and the attacking thrust he provides change the dynamics of AC Milan’s attacking scenarios altogether. He has been ably assisted by Davide Calabria at the RB position, another example of a youth player coming good and complementing the efforts of a foreign signing.

Their other strength has been their midfield. The depth of talent, and its variety, is immense and many clubs will be eyeing their players. Kessie provides box-to-box energy and his late runs into the box are invaluable. Sandro Tonali offers control and composure. Ismael Bennacer does everything that others don’t while Bakoyoko has been an excellent squad option.

Their success has been one built on camaraderie, with the plaudits shared across the squad. Only Rafael Leao has touched double figures in goal in the league. However, nine players have more than five goal involvements for the club, a barely believable stat.

AC Milan this season have been powered mostly by their wingers in attack. Leao has had his breakthrough season while Junior Messias and Ante Rebic have provided vital contributions. Saalemakers, Diaz and Castillejo have all played their parts at different points in the season.

Giroud has arguably been their clutch player – five of his nine league goals have come against the likes of Roma, Inter, Lazio and Napoli. Ibrahimovic has struggled with injuries. Despite completing just 11 90s, he has scored eight goals and provided two assists.

Another thing that has impressed about this Milan side is just how professional they have been, especially in recent weeks. The seasoned heads of Inter Milan have dropped points against bottom-half sides like Genoa, Bologna and Sassuolo while Pioli’s side has not lost since January.

A side as young as this deserves a massive pat on the back for seeing out the title in the way that they have.

Pioli hasn’t just made Milan into champions, he has transformed the club into a machine where every player is a key cog in the wheel.

Martinez, Dzeko, Vlahovic, Dybala, Abraham and Immobile count for nothing if you do not have a system to back it up. This Milan team has again proven that individuals might win you games, but it is the system that wins you titles, a lesson that many clubs across the world would be wise to take up.