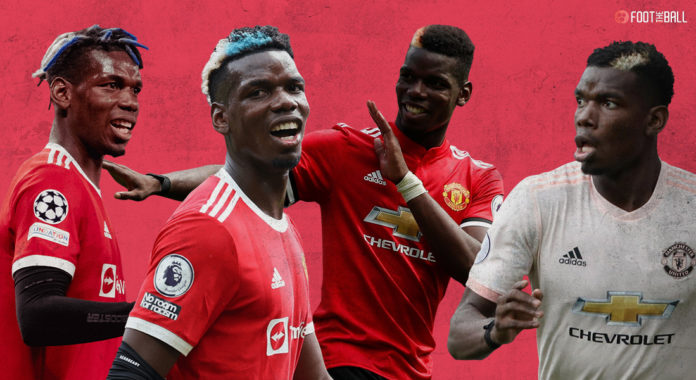 Paul Pogba’s colourful time at Manchester United has finally end. The charismatic footballer, who could turn matches instantly, missed the final games of the 2021-22 season.

Coupled with the sharp drop in performances, it was a far cry from the player whom United paid €105m for in 2016. Pogba has sealed a move back to Juventus, who signed him from the Red Devils in the first place.

Moreover, he was one of the number of players who chose to run down their contracts. Pogba’s time at Manchester United has cannot be judged simply in terms of black and white.

Paul Pogba to Juventus, confirmed and here we go! Full agreement now completed on a free transfer. Deal to be signed at the beginning of July, it’s done and sealed. 🚨⚪️⚫️ #Juve

Pogba will be in Italy in two weeks. Juve sold him for €100m six years ago – now he’s back for free. pic.twitter.com/YNyyOlmSUE

There were fantastic goals, outrageous assists, clashes with managers, and a whole lot more. Pogba continues to be one of the most interesting characters, with plenty to offer still.

Pogba returned under the tenure of Jose Mourinho, and the pair’s relationship was solid in the beginning. Having had a sluggish start, he recovered well to lead United past Ajax in the Europa League final.

However, the next couple of seasons would not be the greatest for Pogba personally. His form dipped often, with observers criticizing his unwillingness to track back defensively.

That saw him miss out on a number of games, with Mourinho sticking with Scott McTominay. The best moment during this time came in April 2018 against Manchester City. Pogba scored a brace to lead a 3-2 comeback win over the Cityzens. However, worse was to come in 2018-19 as Mourinho and Pogba clashed.

The manager labelled his star midfielder “a virus” He was dropped indefinitely following this outburst, and the saga did not bode well for any party involved.

United were in a slump and Mourinho was sacked. Ole Gunnar Solskjaer stepped in and Pogba seemed to have found his groove back. He finished with 16 goals and 11 assists across all competitions. It was hoped that he would finally go onto fulfill his potential soon.

The final few years of Pogba’s time at Old Trafford seemed to pass in a blur. There were a few injuries which ruled him out for weeks. Pogba declined from a super player, able to switch defence into attack within seconds, to…just another player. Solskjaer started playing Fred and McTominay in the midfield double pivot. Pogba was forced out onto the flanks at times.

Things got worse with the arrival of Bruno Fernandes in 2020. Pogba would find himself on the bench often. Though he continued starring for France, his fortunes were club level were not getting better. Pogba would only manage three goals and three assists in 2020-21, but started 2021-22 with a bang.

He assisted four goals in a 5-1 win over Leeds United on opening day. Thus, Pogba became the first Red Devil to do so and surpassed his tally from 2020-21. He finishes 2021-22 with a goal and nine assists in the Premier League.

Paul Pogba’s time at United needs a lot of consideration. Mino Raiola, his erstwhile agent, often clashed with the club. His comments had become infamous in trying to entice a transfer.

Moreover, as much as Pogba tried to show his support for the team, the performances on the pitch left a lot to be desired. Though he was shining in the early years, his creativity waned in the final few months.

Pogba is the only #mufc player to avoid any drop in earnings, a signal of Mino Raiola's leverage when United signed him in 2016 for a world record £89 million. Pogba continued to take home £290,000 per week when United played in the Europa League #mujournal

Fernandes’ dominance coupled with Fred honing his attacking skills meant that Pogba had no place in the starting lineup. Moreover, Jadon Sancho had been signed for the left wing position, which was Pogba’s secondary option. Given the amount of money United spent to bring him back, the move has not paid exact dividends.

Therefore, moving on was the best option for both parties. United will certainly be signing a new player under Ten Hag. For Pogba, he will be out to regain his dominant status back in Italy.