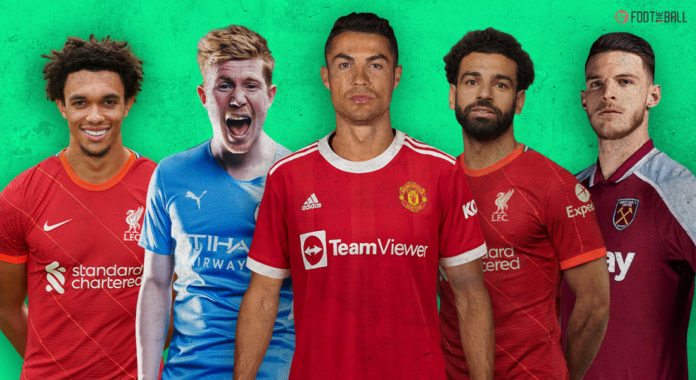 The 2021-22 Premier League season is officially over, and Pep Guardiola’s Manchester City again came out as the winners (their fourth title in the last five seasons). The defending champions fought off a ruthless Liverpool until the final matchday to etch their name on the trophy by one point, like three years back.

And now it is time to wrap up this fantastic campaign by picking FootTheBall’s Premier League team of the season.

Jose Pedro Malheiro de Sa is our first entry into the PL Team of the Season. With goalkeepers such as David De Gea, Edouard Mendy, Aaron Ramsdale, Hugo Lloris, Alisson and Ederson plying their trade in the Premier League, it must have taken some effort from a keeper to surpass all these names.

And this is what Wolvemhamtpon Wanderers shot-stopper Jose Sa did. The 29-year-old was in peak form throughout the campaign. According to Soccerment, Jose Sa prevented 8.26 goals, the best in the top five leagues. Therefore, it is no surprise that Wolves had the most significant difference between expected goals allowed and actual goals allowed.

This is… absolutely insane from José Sá?!

Is it the highest total 'goals prevented' number since you started recording it, @OptaAnalyst?

And surely the biggest gap between top & next best, both in terms of total prevented & goals prevented rate. pic.twitter.com/6SjU0ijvXv

Jose Sa was the best player for the team by Soccerment. According to fbref, he prevents a goal every three matches, putting him in the top one per cent goalkeepers.

His brilliant season has also ensured that he is starting keeper for Portugal when they start their campaign in Qatar.

What a season it has been for Trent Alexander Arnold. The right-back has shown what his peak is, and if he can keep it up for the next five years, then Anfield will see a steady number of trophies in the coming years.

He is also the third best player in Expected Offensive Value Added (xOVA), a metric that measures a player’s total offensive output. He has created more chances for his team than Kevin de Bruyne. He has also improved his defensive attributes, although they are still a work in progress. If they manage to complete the quadruple, it would be a fitting end for our PL Team of the Season right-back.

What does Pep Guardiola want in a centre-back? A player who is an excellent passer who can also be a no-nonsense defender when the need arises. Well, Ruben Dias is a player that fits the bill. The Portuguese has transformed the City defence since joining from Benfica and rightly deserves his place in the PL Team of the Season. This season, Manchester City has conceded 24 goals till now, the best in the top five leagues.

His passing stats are pristine, from passes attempted to pass success rate to progressive passes. He is among the top five per cent of defenders, according to fbref. He also averages 7.99 progressive carries, among the top one per cent defenders. The Portuguese is the key if Manchester City want to remain a leading force in Europe.

The 2020-21 Premier League season taught Liverpool one thing. It was how good Virgil Van Dijk was. The Dutchman missed most of the season due to an injury as Liverpool finished fourth in the league and were knocked out of the Champions League in the quarter-finals.

60 – Virgil van Dijk has never been on the losing side for Liverpool in 60 Premier League games at Anfield, setting a new record for most home games for a single club without ever losing in the competition (W52 D8). Imperious. pic.twitter.com/3WAjoBSrBO

Well, this season, Van Dijk is back, and with Joel Matip at his side, the Liverpool defence has again become a rock. Jurgen Klopp’s men have only conceded 25 goals in the league, one more than rivals City which gets Van Dijk a spot in the PL Team of the Season. Like Dias, Van Dijk has topped the passing charts. According to fbref, his dribble past rating is 0.1 0 per 90 minutes, the best in the league. Like Arnold, Van Dijk will also hope that Liverpool could complete the quadruple.

Portugal will be a handful for any team at the World Cup, as we have our third Portuguese entry in the PL Team of the Season. The full-back also completes the Liverpool-Man City domination across the back line. The Portuguese has racked up seven assists in the league and is also ranked as the third most lethal player on the expected threat metric, with a rating of 6.59. He also has the most passes for any player in the league.

Like all his other comrades in the backline, Cancelo excels at passing. According to fbref, he is among the top one per cent defenders when it comes to pass completion rate, progressive passes and passes into penalty areas.

Well, for our team, we need a no nonsense midfielder who is also a good enough passer. And we have found our man in Declan Rice. The West Ham player is one of the reasons that the team were in a top five race for the most part. Rice averages 0.68 blocked shots per 90 minutes, which ranks him in the top four per cent category when it comes to midfielders. He is also adept at interceptions, with 2.74 per 90 minutes.

This one took AGES 📊Progressive carries are all well and fun, but how impactful are they for each player?

– Saint Maximin *is* Newcastle's ball progression 🤣
– ImEric Laporte, even adjusted for statistics, is a freak
– Declan Rice I see you 👁️

His passing numbers are also quite good. According to fbref, his completion rate is 93.2 per cent, good enough to be in the top eight per cent of midfielders. He is also adept at moving the ball forward. He averages 6.56 passes into the final third (top 92 percentile) and 0.22 passes into the penalty area (top 86 percentile).

Our next player is the heart of Manchester City, Kevin de Bruyne. The Belgian has been performing at the highest level for years, and this season has been no different. De Bruyne has created 82 chances, third-best in the league and also provided 19 through balls, the fourth-best in the league.

Ladies and gentlemen, your two-time @easports Player of the Season…

And with these stats, he sails into our Premier League’s Team of the Season.

Even though Manchester United had perhaps their worst season in the Premier League era, Bruno Fernandes is one of the few players that can come out with his head held high.

The Portuguese was a victim of playing with an inferior team as opposed to most of the players on the PL Team of the Season.

While he may only have six assists, the 23rd best in the league, Fernandes created 89 chances, the most in the league and five more than second-placed Trent Alexander Arnold. He was also the second-best player in through balls (21). Soccerment rated his vision at 80, on par with Trent Alexander Arnold and Kevin de Bruyne. The numbers prove that an elite attacking unit such as Liverpool and Manchester City should have taken better advantage of Fernades’ creativity.

And with Erik Ten Hag in charge of United from next season, we can hope that Fernandes’ stats will further improve.

In case you missed it: What is ‘Project Red Card’?

The most straightforward position to select was Liverpool’s Mohamed Salah, who is yet again producing the goods for Jurgen Klopp’s men. A mere look at his stats shows that he has been far ahead of the pack. The Egyptian is the best in the league regarding goals, expected goals, assists, non-penalty expected goals, expected threats from carries, xOVA, and shots on target.

◉ Most goals
◉ Most assists
◉ Most shots
◉ Most shots on target
◉ Most Big Chances
◉ Most touches in opp. box
◉ Most successful through balls I think Salah deserves it because his stats say so.

Soccerment has rated him as the best attacker in the top five leagues. According to fbref, he ranks among the world’s top one per cent attackers on not one, two, but 13 metrics.

The stats prove it, the matches prove it, and the fact that Liverpool put up a strong challenge on four fronts prove that Salah is a part of the Pl Team of the Season.

Though he has not performed at Salah’s level, Sadio Mane is having a great season. The Senegalese has mainly been key for Jurgen Klopp in the latter part of the season and has scored goals at crucial moments for them in the Premier League. He is the fifth-highest scorer in the league, and if we include only non-penalty goals, he is ahead of the likes of Cristiano Ronaldo and Son-Heung Min.

Mane has also been one of the main instigators of pressuring opponents in the Gegenpressing system. According to fbref, Mane has a pressure success rate of 33.1 per cent, among the top three per cent attackers. And it is interesting to note that his pressure numbers are not great, which means that when he does attempt a pressure, he has a high chance of winning the ball high up the pitch.

So, Liverpool complete their quota in the PL Team of the Season with four players, the most for any team.

How does Cristiano Ronaldo manage to do it? It is a question we are all wondering about as the Portuguese superstar produced some brilliant performances to remind everyone that he was still one of the best even at the age of 37. With 18 goals, Ronaldo was the league’s third-highest goal scorer. He was also the third-best player when it came to shots on target.

Since Ronaldo won't play the last game vs Crystal palace…

Rate his season out of 10 pic.twitter.com/5arM9wgqli

According to fbref, his passing stats were also above the 90 percentile. While these numbers may look pale compared to his peak, it is pretty astonishing that a 37-year-old striker is posting such numbers in one of the toughest leagues in the world.