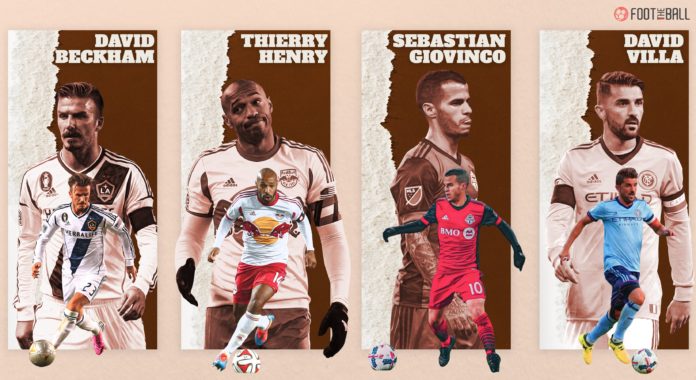 Bale had been looking for a new home after being released by Real Madrid and adds another star name to MLS’ cap. Alongside the pair mentioned, the other big-name arrivals have been Lorenzo Insigne and Domenico Criscito (both to Toronto FC).

However, Bale is certainly the most successful of the lot and could be the next superstar of the league. That is not to say the MLS had ever lacked one.

The league has seen plenty of high-profile arrivals over the years. FootTheBall ranks where Bale’s signing falls among these pantheons of greats.

He remains one of the greatest players in his country, who have qualified for the FIFA World Cup after 54 years. Bale is a European heavyweight, who burst onto the scene with Spurs. He soon left for Real Madrid, forming the terrifying BBC trio with Karim Benzema and Cristiano Ronaldo.

Bale’s powers effectively waned in his final few seasons, with furious media speculation over his future.

There were talks of prioritizing golf, and lack of commitment, with managers not trusting him. Nevertheless, he remains an extremely popular figure and will fit right in with the MLS. He has always been a player that needs to feel loved to succeed. Going by the reception he got on his first day, MLS is set on notice!

The defensive stalwart for Italy and Juventus, Chiellini has been one of the best in his position. He led Italy to the Euro 2020 crown and the Old Lady to a ton of silverware. Chiellini has admittedly suffered from injuries over the past year and lost his starting spot.

In the twilight of his career, the move to MLS’ LAFC certainly seems an effort to stay relevant. However, there is no doubt that he can continue to give big problems to opposing attackers with his acumen and experience. With Chiellini at the back, and Bale up front, LAFC just solidified their title credentials.

The all-time leading goal scorer for a club and country. Rooney had a stupendous career with Manchester United and England. The former Red Devil rejoined Everton in 2017 before signing for D.C. United in 2018.

Rooney remains one of the greatest signings in Manchester United’s history, but he has some stalwart names alongside him

Rooney finished with 25 goals in 52 appearances, endearing himself to the club’s supporters for his hardworking play during his two-year stay.

Of course, the highlight of his time in the MLS remains the famous trackback and cross from deep that D.C. United to pick up a late win over Orlando City in 2018.

New York City FC (NYCFC) signed Andrea Pirlo, David Villa, and Frank Lampard in the same window. Needless to say, Villa was the biggest success. He joined on the back of having reached the UEFA Champions League final with Atletico Madrid.

Villa showed off his major goal-scoring instincts by netting 80 times in 126 matches, a record for the club. His 23 goals in 2016 saw him crowned as the MLS MVP. Moreover, Villa’s form also earned him a recall to the Spanish national team in 2017.

One of the finest ever players to grace the MLS, Henry was a true superstar. Not only did he impress everyone with his work ethic and dedication, but Henry also took to the footballing culture well.

New York Red Bulls had a major star on their hands, who would go on to become a Premier League Hall of Famer. Henry scored 52 goals during his time at the club and won the Supporters’ Shield in 2013, but it was his professionalism and attitude that further helped dispel the notion of MLS being a “retirement league.”

Moreover, he also had a short loan spell with Arsenal during this time and scored in the FA Cup to help the Gunners progress.

The larger-than-life star never does anything quietly. So it was proved once again on Ibrahimovic’s debut for Los Angeles Galaxy (LA Galaxy). He scored a brace, including a ridiculous 45-yard volley to lead his team to a comeback win over rivals LAFC.

Ibrahimovic and Sweden will not be at the 2022 FIFA World Cup. Here are the other superstars who will be watching it from home

Though Ibrahimovic did not manage to win silverware, he did pick up the MLS Newcomer of the Year and was selected in the MLS Best XI in 2018. Ibrahimovic would spend just one more year with LA Galaxy, scoring 31 times before leaving for AC Milan.

One of the best players in the history of the league, Vela has been a true revolutionary. The Mexican attacker joined LAFC in 2018 and has gone on to captain the side. Vela is one of the most recognizable faces of MLS currently on the back of his heroics.

He scored 34 times (single-season record) in 2019 as LAFC won the Supporters’ Shield. Vela was crowned as MLS MVP and picked up the Golden Boot.

Moreover, he has also been selected to the MLS Best XI twice and won Player of the Month four times in his career so far.

One of the first Europe-based players to move to MLS in his “prime.” Giovinco was a rotational player with Juventus and had earned a few caps with Italy. It was his big decision to join Toronto FC that turned him into a bonafide star.

He turned the club’s fortunes around by leading them from last place to become MLS Cup winners in 2017. However, it was his spectacular debut campaign in 2015 that set the tone. Giovinco had the most goals and assists with 22 and 16 respectively.

That led him to win a slew of individual awards including Golden Boot, Assists Provider, Newcomer of the Year, and MVP. Though his departure in 2019 was acrimonious, Giovinco remains the club’s all-time top scorer with 83 goals.

A three-time MLS Cup winner with LA Galaxy, Keane was on a different level in the league. He racked up 104 goals in 165 appearances and was MLS MVP in 2014. LA Galaxy dominated the league during Keane’s tenure, also winning the Supporters’ Shield in 2011.

Additionally, Keane was also his club’s MVP for four consecutive years. Truly a trailblazing stint that was all business as Keane did his talking on the pitch.

The original superstar who kickstarted the era of the ‘Designated Player’ rule. Without Beckham, a lot of this wouldn’t have been possible. His arrival at LA Galaxy in 2007 ushered in the era of star names following suit.

Will Lionel Messi join Inter Miami in 2023? It will depend on a lot of things

Beckham won two MLS Cups and two Supporters’ Shields during his six-year stay. Beckham was a global celebrity whose image greatly enhanced the reputation of the league. He was given a share of a future expansion club that turned out to be Inter Miami CF.

Beckham’s influence in MLS is still being felt and he remains a key figure in the future trajectory of football in the USA.