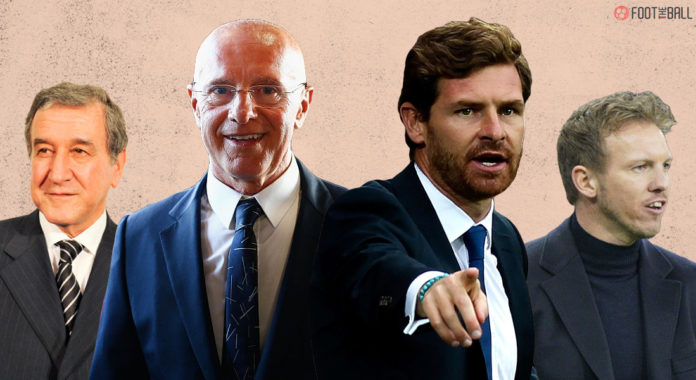 Football is made up of a lot of different components. One of the most important parts is the managers. The leader of the team who coaches and guides the players in every match. They are devoted students of the game, studying systems and tactics for years.

However, there are many cases of managers who have had little to no playing time themselves! They were blighted by injuries or the environment in which they grew up.

Nevertheless, they were still able to rise to the top of their profession through years of hard work and dedication. FootTheBall presents the top 10 managers who have gone on to have great success despite not playing professionally.

Starting off your managerial career at the age of 18? Piece of cake for Grant. The Israeli tactician had his debut role with Hapoel Petah Tikva as their youth manager. He soon progressed to the first team, winning back-to-back Israeli Toto Cups in 1990 and 1991.

Grant had subsequent spells with Chelsea, leading them to the 2008 UEFA Champions League final, Portsmouth, and West Ham United. Moreover, Grant was also in charge of the Ghana national team from 2014-17, before having a brief stint in India.

The evergreen English manager who has been coaching for almost 50 years. Hodgson was an ever-familiar face in the Premier League era with spells at Fulham, Liverpool, West Brom, and Crystal Palace.

Additionally, he has also been in charge of England, apart from Switzerland, UAE, and Finland. His greatest successes came with The Cottagers, whom he led to Premier League safety in 2008 before making the 2010 UEFA Europa League final.

The Portuguese manager started his career at 27, spending time with Braga, Olympiakos, and Sporting CP. However, Jardim never really settled at any of these clubs and left soon after. Finally, he made his way to Monaco, who were on the cusp of a breakthrough in French football.

After two consecutive third-place finishes, the Monegasque side finally won Ligue 1 in 2016-17. At the forefront of their revolution was Kylian Mbappe, who would soon sign for domestic powerhouse PSG. Jardim remains an ever-popular figure at Monaco and is currently manager of UAE club Shabab Al Ahli.

A long winding road to the top for the chain-smoking manager. Sarri joined USD Stia 1925 in the eighth division in 1990. However, his name came into prominence when took over at Empoli in Serie B in 2012.

Sometimes it’s not a happy reunion! The top managers who failed at the helm of their former clubs

Sarri led them to promotion in his second season, which prompted Napoli to hire him. It was here that he became one of the most recognizable managers in European football. Napoli played an exciting brand of football, with Sarri leaving for Chelsea in 2018.

Though he won the UEFA Europa League, relations soured quickly and he moved on to Juventus. Having won the Serie A, Sarri joined Lazio where he currently remains.

Rodgers was on the books of Reading as an 18-year-old but retired when he was 20. He joined the backroom staff of Jose Mourinho during the Portuguese’s first Chelsea spell. Rodgers’s first permanent job came in 2008 with Watford.

However, it was Swansea where he made his name. Rodgers led the Swans to Premier League promotion in 2011.

They became the first Welsh club in the English top-flight, but Rodgers left in 2012 for Liverpool. The Reds came close to winning the Premier League in 2013-14 before that infamous slip from Steven Gerrard.

"It’s an amazing feeling when you give something to people who have never had it before. To see the overall emotion from around the country was great." 💙 pic.twitter.com/Rqd9SRWWbZ

Rodgers was sacked in 2015 and went on to win every trophy on offer in Scotland with Celtic. He was hired as Leicester City manager, leading them to FA Cup glory in 2021.

One of the best young coaches in world football currently, Nagelsmann has been on the rise for a few years. He became the youngest manager in Bundesliga history when Hoffenheim appointed him in 2015.

Hoffenheim qualified for the UEFA Champions League for the first time in their history in Nagelsmann’s second season. He moved on to RB Leipzig, where the train took off. Die Roten Bullen became one of the most exciting sides in Europe as Nagelsmann implemented his fast-based approach.

He is the youngest manager to win a knockout match in the Champions League when Bayern Munich came calling. Nagelsmann and co. demolished the competition to win the Bundesliga in 2021-22.

Before Nagelsmann came along, it was Vilas-Boas. Once again, another protegee of Jose Mourinho, this time when he was at Porto. Vilas-Boas took over the reins of Porto himself in 2010, leading them to a treble of Primeira Liga, the Portuguese Cup, and the Europa League in his debut season.

He remains the youngest manager to win a European trophy and was soon on the move to Chelsea. However, it was an unhappy marriage, and so was the next one with Spurs.

Vilas-Boas left for Zenit and then Shanghai SIPG where he got the respective teams back to playing superbly. His most recent job was with Marseille, which finished second in 2019-20.

The legendary AJ Auxerre manager was at the helm for 44 years. He was appointed when he was just 23 and the club was playing amateur football. Roux led the club to the league title in 1996 and won the Coupe de France four times.

Moreover, he also reached the semis of the UEFA Cup in 1993 and lifted the UEFA Intertoto Cup in 1997. However, Roux’s greatest success came in developing several French superstars who came through Auxerre.

This included the likes of Eric Cantona, Laurent Blanc, Basile Boli, and Djibril Cisse among many others. Truly a titan of the game.

The beloved Brazilian manager is one of only two managers to appear at six FIFA World Cups. Parreira’s greatest success came with Brazil, leading them to glory in the 1994 FIFA World Cup, alongside winning the 2004 Copa America and 2005 FIFA Confederations Cup.

Moreover, he also led Kuwait and Saudi Arabia to AFC Asian Cup glory in 1980 and 1988 respectively. Parreira has also won silverware at the club level with Fluminense, Fenerbahce, and Corinthians.

A revolutionary of the game who changed the ways of football in the 1990s. Sacchi was working as a shoe salesman alongside managing his local club. His first breakthrough came when he was appointed manager of Parma in Serie C1.

Sacchi led them to promotion in his first season, before coming close to qualifying for Serie A in his second season. However, the most important aspect of his second season was defeating Milan twice in the Coppa Italia.

The Rossoneri were intrigued and took a punt on the rising star. Milan hired him in 1987 and Sacchi immediately repaid the faith by winning the league title in his debut campaign.

It was Milan’s first Scudetto in nine years, and they also won the Italian Super Cup. The team had the famed Dutch trio of Ruud Gullit, Marco van Basten, and Frank Rijkaard. Moreover, their defence was as good as they come with Franco Baresi and Alessandro Costacurta as anchors.

Milan won six European titles in two years with the European Cup, Super Cup, and Intercontinental Cup twice. Sacchi left Milan to lead Italy to the finals of the 1994 FIFA World Cup, won by Brazil. He remains of the greatest innovators of the game.

A surprise in Germany?