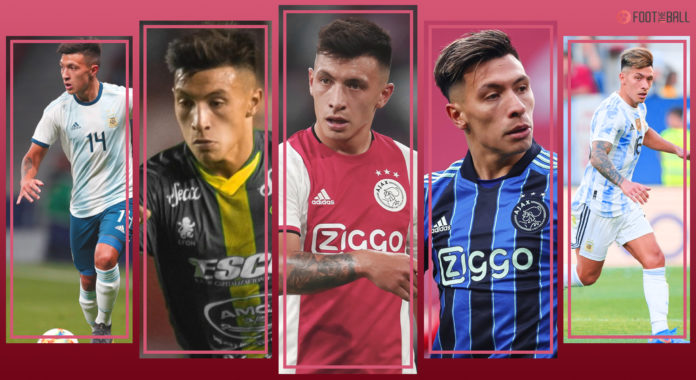 Lisandro Martinez at Man Utd might have had the quickest journey to becoming a fan favourite. Arriving with much fanfare after rejecting Arsenal’s advances, his no-nonsense playing style and fearless defending has the fans swooning for him.

His career trajectory so far gives all the indications of a career that is on the right track upwards.

Manchester United fans are keen to find out everything about him, and FootTheBall presents the top 10 facts you have to know about the Argentine defender.

Lisandro Martinez is from Gualeguay in Argentina. It is more than 200kms away from Buenos Aires, and not a well-off neighbourhood. His parents were not rich, which translated to a struggle in his early days.

Martinez has spoken of wanting to help those who are worse off than him, and always carries the lessons he has learnt.

Moreover, after winning the Copa America 2021, his father Raul Martinez arranged for him to parade the trophy atop a fire truck. Needless to say, Martinez is loved and adored by all in these parts.

Close with his family

Martinez is very tight with his family, including his grandparents. Raul Martinez and Silvina Cabrera, his mother, have always supported him throughout his career.

Martinez is closer to his mother, who has been present through all his career achievements. Furthermore, Martinez also has a little sister to whom he serves as godfather. The pair are very close, and he calls her ‘Candy.’

That is not all as Martinez’s grandparents have also played a key role in his growing up years. He used to spend a lot of time at their house, and it is evident that this kind of humility helped him in later life.

Here’s something you do not see every day. Lisandro Martinez has a distant relative who is a two-time winner of the Copa America. Ramon “Mencho” Medina Bello, a champion with Argentina in 1991 and 1993, has relations with Martinez.

This is a relationship that the 24-year-old himself was unaware of until after winning the tournament in 2021. Ramon Bello was from the same area as Martinez, which makes this a more plausible connection.

Martinez’s big breakthrough came after joining Newell’s Old Boys in 2014. It was the first time that he had to live away from his parents and family. Therefore, Martinez had to learn and adapt to everything new around him.

Similarly, he had to update himself with the rigours of daily footballing life. It was here that Martinez started impressing scouts and coaches, which led to a move to fellow rivals Defensa y Justicia.

The Butcher of Amsterdam

A nickname that Martinez does not especially like. He was given the moniker after joining Ajax. As Martinez himself put it, “I have given out my share of kicks and picked up that nickname.”

However, Martinez is quick to point out that the nickname is a crude representation of his game. “But I’m not one to go flying in, I like to play more. But every ball is a matter of life or death.”

The big move to Ajax was not all peaches for young Martinez. He had to settle down into a footballing philosophy that he had not experienced before. It was a chastening ordeal, which left him frustrated at times. As he himself revealed in an interview,

“At first I wanted to run home crying. I felt horrible. I am a player who likes to have the ball but when I had to play on one or two quick touches I got killed. It was amazing how late I used to get there.”

A settling-in period is usual for any player, and Martinez battled through to thrive soon.

Now, this is a name that Lisandro Martinez has got behind. He is called a “pitbull” in his native country. Speaking about the nickname, Martinez said, “In Argentina, they called me The Pitbull.”

If Cristiano Ronaldo leaves, who should United go for? Here are five options

That covers my playing style better. I bite into my opponent.” Therefore, it is clear that the player’s sole aim is to get the ball off the opponent whenever possible. He will harry and harass strikers into giving up possession as much as possible.

Lisandro Martinez is in a long-term relationship with Argentine model Muri Lopez Benitez. The pair met when Martinez had just joined Newell, and have continued to fall in love together.

Muri Lopez is also a carnival dancer, and the pair have posted several pictures of their happy selves together. It is clear that the support of a dedicated partner has helped Martinez focus more on his on-pitch duties.

Martinez was not much of a talker in the old days, and it was Muri Lopez who helped him grow out of his shell. The pair bonded together very well before Martinez started opening up more and more.

Nowadays, he speaks up regularly on gender issues and human rights causes. Therefore, it is clear that Martinez knows that being a footballer comes with big responsibilities too.

Given what all there is to learn about Lisandro Martinez, it is no surprise that players and coaches speak so highly of him. There’s something about the player that draws people to him.

Right from his childhood days, Martinez has always tried to be someone who helps others and not just chase things selfishly. Moreover, his parents, relatives, and partner have helped him stay grounded. All of it translates to a big career in the future.