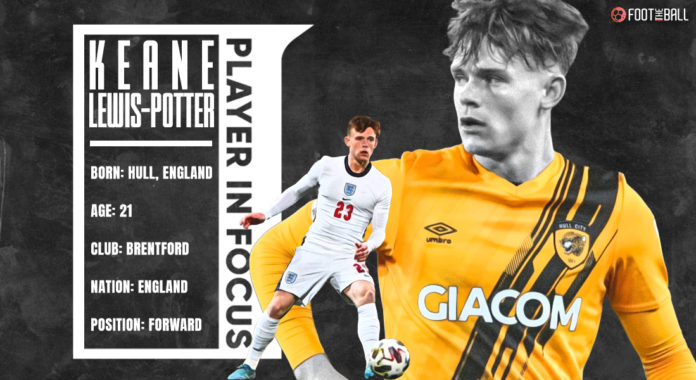 Brentford have only gone and done it again. One of the smartest clubs across Europe have pulled off a second transfer coup in a week. Having signed Europe’s most played teenager in Aaron Hickey, the Bees have now snapped up Keane Lewis-Potter from Hull City.

Both transfers were club-record fees as Thomas Frank prepares for another crack at Premier League survival. While Hickey was known in European circles, Lewis-Potter is an underrate gem on the rise.

He was one of the key contributors for the Tigers in 2021-22, winning all three of their individual end-of-season awards. How will he fare at the highest level, against top-class opponents? Of course, there will be a settling in period, but Brentford are confident of his quick progress.

The 21-year-old Hull native has been with his boyhood club since the start. Lewis-Potter was loaned out to Bradford (Park Avenue) in the 2018-19 season, before settling into a first-team role that summer.

He made his senior debut in November 2019, and would score two goals that season. However, it was the 2020-21 season that really helped elevate Lewis-Potter to a new level. He was an ever-present in the side as Hull won promotion from League One. There was much to like about him, including his supreme versatility in attack.

Lewis-Potter was played all over the final third, but the left flank was his most common position. Moreover, despite being right-footed, he can comfortably run down the left and carry the ball quickly.

🏴󠁧󠁢󠁥󠁮󠁧󠁿goal in his first-ever start for England U-21

🥇Hull City Player of the Year

Hull rely on him as a quick outlet who eases the pressure on the defence. Lewis-Potter bettered his game in the 2021-22 season which saw Premier League clubs taking notice. A low centre of gravity, coupled with a penchant for dribbling allows him to get into dangerous positions regularly.

Furthermore, Lewis-Potter also has great finishing capabilities from all angles, so there is always a danger feel with him. Though some of his decision-making could be better, there is plenty of time to improve that.

25 goals in two seasons, along with eight assists is quite a haul for a player who made his debut in 2019. Keane Lewis-Potter has shown his fantastic qualities right from day one, and 2021-22 was another reminder.

He took almost 200 shots in this span, showing his positioning is excellent for a goal-scoring chance. Out of the 103 he took in 2021-22, 37 were on-target, the 9th-most in the Championship. Moreover, Lewis-Potter also created 52 chances, which is a more than decent output.

The best facts you have to know about Thomas Frank

One has to remember that it was only his second full season at a senior level. Lewis-Potter has shown himself to be an avid dribbler, completing 46.2% of them while winning 43.2% of his dribbles.

Hull have benefitted greatly from his direct winning, with opponents afraid of felling him. Nevertheless, he still managed to win 54 fouls, and is a dynamic presence to trouble the backline.

All good things come with caveats. Keane Lewis-Potter is not a very good crosser of the ball. Yes, he plays on the flanks mostly, but a proper crossing technique is missing. Lewis-Potter relies on his creativity and tricks to get into dangerous areas.

Therefore, his crossing success ratio is only 18.4% over 2021-22. One problem could be that he is right-footed while Hull deploy him on the left.

🏴󠁧󠁢󠁥󠁮󠁧󠁿goal in his first-ever start for England U-21

🥇Hull City Player of the Year

However, he will have to select a strong position that highlights his best abilities. No top-flight team would not a player who is unsure of a primary position. Moreover, Lewis-Potter has to build on his physicality in order to brush off defenders better. He is not expected to contribute defensively, but an all-rounded character always helps.

Brentford have shelled out a club-record £16m initial fee+£4m in add-ons. The Bees are placing a lot of faith in Keane Lewis-Potter as a fourth attacking option. Moreover, Lewis-Potter’s addition gives them a new level of ground threat.

He will be expected to advance the ball quick, and keep the pressure on the goalkeeper. It remains to be seen how the linkup play works. However, Thomas Frank is a master at his craft and knows what needs to be done at this level.