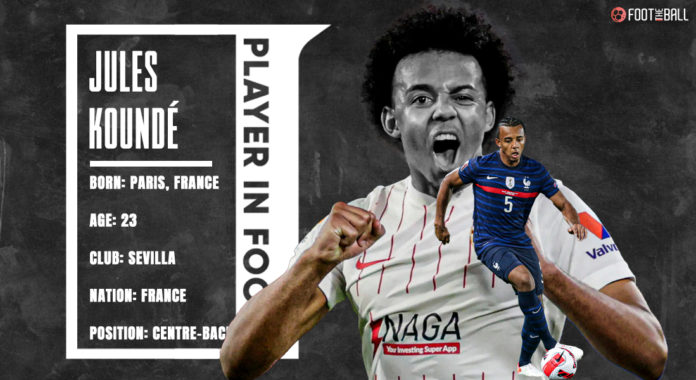 Rising up the ranks in the world of football is a certain young French defender who plies his trade at Sevilla in Spain. The name Jules Kounde is enveloped by a transfer frenzy halo that has resonated with his outstanding performances in La Liga.

The trinity of young French defenders were the talk of summer 2021. Former RB Leipzig duo Dayot Upamecano and Ibrahim Konate both sealed moves to Bayern Munich and Liverpool respectively. Jules Kounde tried and forced a move to Chelsea in summer 2021 only for Sevilla to stand firm on their decision of not to sell. 12 months later, in 2022 Chelsea have reignited their interest in Kounde after Ake decided to stay put at Manchester City.

Nathan Aké to stay in Manchester City after Chelsea fail to meet his valuation. The pursuit for Jules Koundé & Presnel Kimpembe shall continue.#Ake #Chelsea #Transfers pic.twitter.com/inbsz4FfPs

The Blues have displayed a strong showing in the summer 2022 transfer window after a slow start. They have already signed Raheem Sterling from Manchester City and Kalidou Koulibaly from Napoli. Chelsea are also in talks with PSG over a transfer for Presnel Kimpembe but with Rudiger and Christensen leaving on a free transfer, the noise continues to build around Jules Kounde.

The French defender has been on their radar for some time and would be a good replacement for Azpilicueta in all that he offers. Kounde’s arrival at Stamford Bridge would be a statement of intent. Kounde is comfortable playing as one half of a centre-back partnership, can operate on the right side of a back three and is even capable at right wing-back. The Sevilla defender is physically strong, but good on the ball. He is the modern defender in the way that he can play out possession from the back.

How good is Jules Kounde?

Kounde was born in Paris. He played at various regional sides as a youngster before eventually moving to Bordeaux. He quickly rose up the ranks and made his professional debut at 19 years of age. In his first full season at the club, Bordeaux finished 6th and qualified for the Europa League.

The season after that Kounde featured in 51 games for Bordeaux as the team improved drastically with Kounde establishing himself as a regular in the side. He had 129 passes into the final third that season which was a league-high. Bordeaux also ranked third in the league in terms of touches in the defensive third.

His strong showing in Ligue 1 generated a lot of buzz which warranted a move. La Liga giants Sevilla paid £25 million which was a huge statement for a player that young.

The 2020 Europa League Final was epoch-making for a few reasons. Romelu Lukaku was chasing down Ronaldo’s Inter goal-scoring record, Sevilla reclaimed the Europa League trophy and an awe-inspiring performance from the young defender Jules Kounde. At the tender age of 21, the Frenchman was already a star for Sevilla.

Kounde is a ‘modern’ and versatile centre-back – pacey, excellent at distribution, and able to play in a back three as well as at right-back.

Kounde’s performances in the 2019/20 season drew him deserved recognition outside his home country of France. He had a standout performance in the league that year under Julen Lopetguii. The Spaniard after being sacked by Real Madrid started a rebuild of Sevilla squad.

Sevilla finished fourth alongside their Europa League Triumph. Kounde’s numbers that season increased drastically. His passing accuracy skyrocketed to 88%. His ability to find the long pass also significantly improved as he completed 75% of his 453 attempts.

Over the past couple of seasons, Kounde has gone on to become one of the best defenders in La Liga and is constantly linked with a move to Barcelona, Real Madrid, Chelsea and Manchester United.

Whilst Kounde exhibits the skills of a ‘complete’ defender, he particularly excels at playing out from the back – a valuable trait in Thomas Tuchel’s 3-4-3 setup. When compared to other centre-backs in Europe’s ‘top five’ leagues, Kounde ranks in the top 10% for progressive passing distance per 90 (432m), short passes completed per 90 (21.1), and pass completion rate for medium passes per 90 (95.8%).

Kounde is most comfortable at right centre-back and often likes to stride forward with the ball to break opposition lines. His 1.24 dribbles completed per 90 is in the top 2% for European centre-backs.

Impressively, across 2019/20, Kounde ranked higher than Virgil van Dijk for dribblers tackled per 90, possession won per 90, successful pressures per 90, and non-penalty expected goals per 90.

With Chelsea having worked in silence this summer up until now, Kounde represents a move in the right direction to compete in multiple competitions next season, with the goal to close the gap on champions Man City.

Koundé is most naturally a right-sided central defender, but he is sufficiently agile, athletic and technically gifted that he can also play perfectly well at right-back. Making lengthy, lung-busting runs, he performs there with the competence of a professional full-back.

At 5’11”, Koundé is neither particularly tall nor broad for a central defender, but he exhibits great strength when challenging for the ball. In those individual duels, his speed gives him an edge when chasing the ball, and a powerful leap means he can win aerial battles – a valuable trait at both ends of the pitch. He is adept at switching play with medium and long-range passes, and repeatedly executes doing so with great success.

That is not to say that Koundé does not have the ability to take the ball out from the back himself. Quite the opposite. When the situation requires, perhaps after the opposition blocks the passing lane to a midfielder, he pulls wide to receive a switch of play and will move out quickly with the ball.

On the face of it, Kounde is a low-volume defender who doesn’t lunge into tackles very often, often letting the play come to him. One of his best attributes is his incredible jumping and heading ability. Not only is he able to sniff out opponents and come out on top in aerial duels, he has a knack of winning them even against the tallest of forwards.

As with a few positions World Champions France are spoilt for choice with their defensive options. The young options of Kounde, Umpamcano, and Konate are joined by the experience of Varane, Kimpembe, and Hernandez. With the injuries that have hampered Manchester United’s Varane, Kounde looks like the ideal choice to become a long-term successor to the experienced French centre-half.

What’s more, Kounde is ready to take the next step in his career having spent the last three years at Sevilla. He has achieved all there is to achieve at the Ramon Sanchez Pizjuan and needs to move to a club with a higher ceiling to fulfil his own potential. A summer switch to Chelsea would fit the bill.

Koundé has the potential, personality and drive to make it to the very top. All of that has so far led him to becoming a crucial player in Sevilla’s starting 11, and led to interest from some of Europe’s biggest clubs. At 23 years old, Kounde has plenty time to improve further. He has proven himself at the top end of La Liga and has also played in the Champions League and Europa League. The fundamental qualities of Kounde’s game are sound and he would be a good player for Thomas Tuchel to mould.