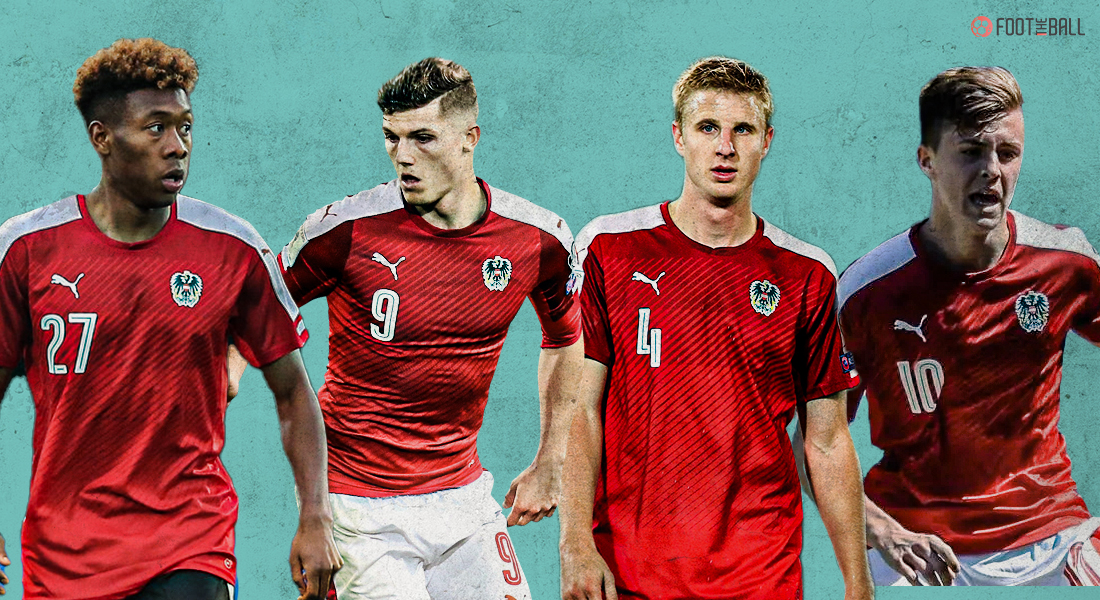 Austria will feature in the Euro 2020 this year as one of the least favourites despite having a great pool of talent. This will be their third appearance in the Euro finals, a consecutive one after their shock group-stage exit in 2016.

Austria has always been the “nearly” team in major tournaments. Whenever they look in form and ready to challenge, a couple of poor results sabotage their dreams.

The majority of Austrian players play for good clubs in Europe, mostly in neighbouring European giants Germany. Players like David Alaba and Marcel Sabitzer are considered one of the best in their positions across Europe.

Youngsters such as Marco Friedl, Xaver Schlager, Christoph Baumgartner are highly rated in their age groups and tipped to be Austria’s upcoming golden generation.

The squad quality suggests Austria is not really inept in terms of skill and technical ability but rather tactically and psychologically. This trend looks to change in recent times and Euro 2020 will be their litmus paper test.

AUSTRIA’S PAST WITH THE EUROS

Austria first qualified for the Euro finals in 2008 as hosts of the competition. It is usually a matter of pride to host such an iconic tournament, but Austrian fans were so scared of getting embarrassed that some of them started a petition to withdraw their team from the competition in order to save face.

On expected lines, Austria went out of the tournament in the group stage itself being grouped alongside Germany, Croatia and Poland.

Although, the most memorable moment of Euro 2008 involved Austria, THE Michael Ballack free-kick from long-range that knocked Austria out.

In the next edition in 2012, Austria failed to qualify for the finals after finishing fourth in their qualification group.

They finally broke the curse in 2016. It was considered the revival of Austria as they won their qualification group undefeated, winning nine out of the ten games played. It was an amazing feat and suddenly Austria was tipped to become the dark horse of the tournament who will go on to upset many giants. Alas, their victory run ended with the qualification round as they failed to register a single win in the group stage.

A finely taken equaliser from Schöpf, but Austria need to score again or they're out of #EURO2016 #ISLAUT pic.twitter.com/9h7nyBVsEP

A 2-1 loss in the final group game against minnows Iceland saw them crash out of the tournament embarrassingly once again.

At Euro 2020 this year, Austria will mark their third appearance after they finished second in the qualification round and booked their berth in the finals in consecutive editions.

Many of Austria’s first-choice team plays in the German Bundesliga including their captain Julian Baumgartlinger who plays as a defensive midfielder for Bayer Leverkusen.

The German top-flight league is one of the biggest football leagues on the planet and has always been a dream destination for most players in Central Europe.

Quite the #Bundesliga presence in Austria's starting line-up 😁 https://t.co/E0syFsd5v4

Some of the Austrians play for the biggest sides in Germany and are arguably the best players in the league in their positions.

The 28-year old is known for his versatility and ability to control any area he occupies on the football pitch. Primarily a centre-back, Alaba currently plays for German and European champions Bayern Munich and is set to leave for Real Madrid in the summer.

It is an honour to win your nation’s footballer of the year award, David Alaba has won it SEVEN times.

Alaba is one of the most decorated players in the world having won 26 trophies in 12 years with Bayern and is not far from adding one more as they close in another Bundesliga.

The Austrian is one of the most talked-about attacking-minded midfielders in Europe these days.

Sabitzer went to Germany as a 20-year old and has improved a lot over the years impressing everyone with his all-round gameplay which includes scoring and assisting goals, winning duels, dribbling, creativity and his presence across the pitch.

Currently, at RB Leipzig, Sabitzer is under the radar of many top European sides looking to revamp their midfield.

The young Hoffenheim playmaker in his early 20s is already compared to legendary German midfielder Michael Ballack for his versatility and adaptability at such a young age.

Christoph came to Germany at the young age of 16 and made his senior debut for Hoffenheim at 19 years of age. He is pitched to be one of the brightest upcoming talents in the Bundesliga and already got big clubs chasing him.

The 21-year old has five goal contributions in just eight caps for his senior national side while he touched the 15 G+A mark for his club side this season.

Some more notable Austrian players in the German Bundesliga include Martin Hinteregger, Sasa Kalajdzic, Aleksandar Dragovic, Xaver Schlager, Guido Burgstaller, Stefan Lainer, Marco Friedl, Stefan Ilsanker among others. The superstars of Austria that ply their trade in the Bundesliga combine to make a solid foundation for some major triumphs at Euro 2020.

Foda likes to play a high pressing counter-attacking brand of football in a 4-2-3-1 formation to cut passing lanes and win back possession in the middle of the pitch. This style helped them qualify for the Euro finals this year but might backfire against technically and physically superior squads.

Austria is drawn with the Netherlands, Ukraine and North Macedonia in the Group C of Euro 2020.

A relatively easier group to qualify from as compared to Euro 2016, Austria is favourites to qualify for the round of 16.

2010 World Cup runner ups and third-placed in 2014, Netherlands was very recently one of the best European sides before it fell flat and failed to qualify for the Euro 2016 and World Cup 2018.

Ukraine and North Macedonia both started their European journeys in the early 1990s and the latter will be playing their first major international tournament as an independent country.

Austria without any doubt is a strong side and do not suffer from a lack of talented players. What they do need though is the right motivation and mentality to make it big this time around.

The central European country has the unusual record of playing the most number of matches at the Euro finals without winning. SIX.

Whether Franco Foda’s resilient men can change that and save their fans from further embarrassment is for the future to tell. Stay tuned with FootTheBall for all the Euro 2020 updates.