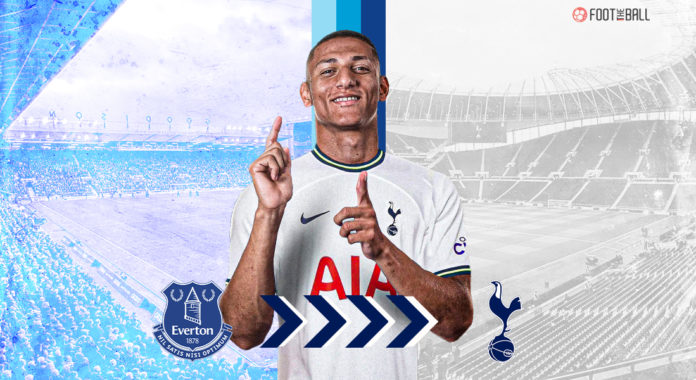 Of Moshiri’s investment into the playing squad, Richarlison’s £35 million transfer fee in the summer of 2018 was the second-largest in Everton’s history, and one that was greeted with excitement from the blue side of Merseyside despite the fee for a player with limited senior appearances in Europe whose performances had faded during the second half of the 2016-17 season.

Fast forward 4 years and the Brazilian has taken the step from a relegation-threatened side to a club competing with the best in the UEFA Champions League under the stewardship of one of the best football managers in the world right now – Antonio Conte.

✍️ We are delighted to announce the signing of Richarlison from Everton, subject to a work permit.

Richarlison is somewhat egotistical, which, while it’s not necessarily a negative, it would surely be with a promise of significant game time from Antonio Conte. Conte would presumably be a fan of the Brazilian’s on-pitch persona, as he embodies the Italian’s touchline charisma in his performances.

His aggression and tenacity are missing at the top of the pitch, and his willingness to fight for the badge and teammates displayed at Everton would be a real asset, and FootTheBall grade this high-profile transfer and whether it would help Spurs and Conte in the long run

Richarlison is a rare breed of attacker in the sense that he is able to play in multiple positions in the attack at an alarmingly good level. There are pros and cons to that of course as a huge positive is that he will get game time under almost any coach that will manage him. However, it does limit his ceiling a little bit as he isn’t able to secure a position where he can master his game and produce consistently.

Having started as a winger at Fluminense and Watford, the Brazil international has been deployed on either side for the majority of his time at Everton. However, he seemed to have found a consistent starting berth as a striker alongside another young striker in Dominic Calvert-Lewin in Ancelotti’s 4-2-2-2.

Richarlison is more than capable in that he cannot only play within tight spaces and draw opposition players to him, but he is also a quick thinker who has the ability to make correct decisions, whether that is by making the right pass or knowing when to make the right run. At times, he may look like he is playing at a million miles a minute, but a lot of that is due to the number of things Everton asked of him, especially last season. Richarlison never leaves defenders feeling comfortable and steady. He is constantly making runs and creating danger across the field.

In prior seasons, Richarlison produced 10, 16, 15, and 10 goal contributions in three seasons at Goodison Park and his debut Premier League campaign with Watford. The Brazilian has 48 goals and 18 assists in 173 Premier League appearances. However, in a more dominant and higher quality side like Tottenham, there is potential for these numbers to grow.

Aside from goal contributions, Richarlison’s work rate fits the mould of a Conte-style forward, as his numbers depict a high-intensity, all-action player. Of forwards in Europe’s top five leagues, Richarlison profiles in the top 10% for pressures, blocks, interceptions, and tackles, most of which presumably take place within the opposition half owing to his advanced position.

This energy is a box checked for Conte, as his willingness to press high up the pitch may help facilitate opposition mistakes and win possession in dangerous areas.

When news came out at the start of the offseason that Tottenham Hotspur were investing a £150m capital increase into the club, it gave the impression that Spurs were going to make a few different purchases at larger values in order to truly “go for it” under Antonio Conte. At the start of the transfer window, Spurs did quick and easy business by bringing in two players who could start right away in Ivan Perišić and Yves Bissouma, while also adding backup keeper Fraser Forster to help the club’s homegrown quota.

Richarlison is a player that can operate in a variety of positions and excels in many facets of the game. He is a dangerous 1 vs. 1 dribbler, giving him the ability to play either on the wing or as part of Conte’s makeshift dual 10s in the 3-4-3 shape. He is a direct player who creates good angles, offers an exceptional work rate and can play in behind or off on his own.

At Everton, he was often strike-partnered with Dominic Calvert-Lewin. When the latter was injured or sidelined, Richarlison was more than capable to fill in, playing as a goal poacher. He also excelled in a left-wing role due to his dangerous ability on the flank. Conte prefers his players to play under control and do the simple things asked of them. That is why a player like Dejan Kulusevski, who most would not deem to be a speedster, operated so well and effectively in a well-oiled Conte side that quickly adjusted to his patterns and ideas as the season went on.

While many Spurs supporters will be put off by the player due to his weighty price tag and his “pest-like” playing style he developed against opposing fans over the years, the truth is that Richarlison checks a lot of boxes for Spurs and Conte.

There has been talk that Spurs should have been looking at proven players in order to take that next step and level up against more of England’s elites. However, the focus should be more on what Conte requires for his squad going into next season. That may not be the same thing.