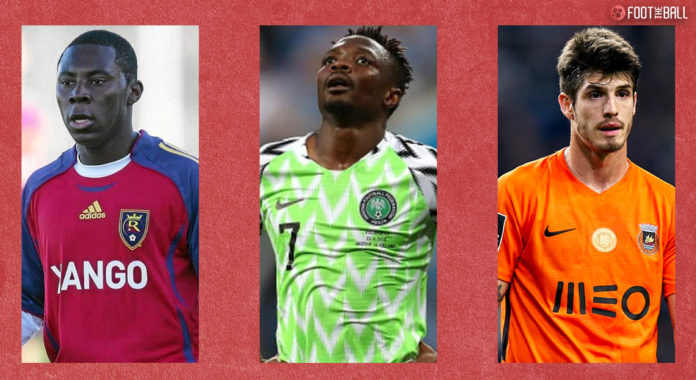 2022 is truly a historic year for football fans. Not only is there a FIFA World Cup scheduled to happen in Qatar, but also, FIFA 23 will be the last of the line for an iconic franchise. EA Sports and FIFA have already announced their split following one last game.

The game developers will be releasing their games in the future, while the governing body has some great things planned. Nevertheless, a part of every fan’s childhood is at stake, so it makes sense to focus on a favourite thing.

The wonderkids of FIFA. These are the players who dazzle in every edition of the game. They are the best players to have, and everybody snaps them up. However, not all of those players turn out as great in real-world football.

Another FIFA star out to replicate top form in England? Tyrell Malacia for Manchester United could be the gamechanger they needed

There are more hits than misses when it comes to physically playing. In that regard, FootTheBall looks at the most hyped-up players who failed to justify their FIFA talents.

One of the most evergreen players in FIFA 14, Piazon was a must-have for any squad. The wide attacker was equally dangerous from a distance as he was from close range. Having Piazon meant you would be guaranteed pace and trickery in the middle whenever the ball got to him.

However, the real-life scenario turned out very differently. Piazon was stuck for many years in Chelsea’s never-ending loan system.

Chelsea have new owners, led by Todd Boehly, and here is everything you must know about the American

At one point, he was the Blues’ longest-tenured player with 10 years. There were only three senior appearances, as Piazon spent time in six countries. Currently, he is on loan at Botafogo from Braga.

Another gem from FIFA 14, and we are still not done! Fischer was a lock-on on the flank for Ajax and your favourite team. He was just 19-years-old back then, meaning the world was at his feet.

Fischer had an extremely high ceiling, and his crossing from the left made life easy for the strikers. On a different note, Fischer was successful with Ajax in real life too. He made over 100 appearances and won two Eredivisie titles, alongside being named the Danish Talent of the Year in 2012.

However, things started to unravel when he left for Middlesbrough in 2016. Fischer moved onto Mainz in 2017, before spending some successful years with FC Copenhagen. He currently plays for Royal Antwerp in Belgium.

Marin fell curse to the “next Lionel Messi” trope, and his career never really recovered after joining Chelsea. Marin was a star for Werder Bremen, racking up more than a 100 appearances in three years.

The big move to Stamford Bridge was supposed to take his career to new levels. However, Marin was yet another addition to the infamous loan system and never really got the chance to shine.

He had four consecutive loan spells before joining Olympiakos in 2016. Currently, Marin is without a club after his contract with Hungarian club Ferencvaros expired.

The evergreen star forward of FIFA 14 whose CSKA Moscow team were a menace. Alongside Seydou Doumbia, Musa was the attacker to have and a nightmare to defend. He was one of the quickest players in the game, and left opponents in his wake.

Ahmed Musa is the only Nigerian to have scored more than once in a FIFA World Cup match as he scored twice against Argentina in 2014 as @NGSuperEagles lost 3-2. He will win his 69th cap against Serbia, looking for his 14th goal. #SRBNGA #Russia2018WorldCup Match kicks off at 8pm pic.twitter.com/34ih8VIz46

Musa would never quite reach those heights in his actual footballing career. He had a dismal spell with Leicester City, before recapturing some old form with Al Nassr. At the international level, Musa has scored at two FIFA World Cups and has crossed 100 caps for Nigeria.

Currently, he is with Fatih Karagumruk, who recently hired Andrea Pirlo as manager. Musa remains one of the cult players in annals of FIFA history.

The original wonderkid who signed a professional contract at the age of 14. Adu was supposed to become the next American legend, but the reality was very different. The “next Pele” broke several records, including the youngest player to appear and score in the MLS.

Though Adu failed, there have been plenty of starpower in the MLS. These are the 10 biggest stars in MLS history

Moreover, DC United also won the league in 2004, but the three years there would be the high point. After leaving for Real Salt Lake in 2007. Adu became a journeyman player, going onto represent 15 clubs in nine countries. Currently, Adu is without a club, having left Osterlen FF in 2021.

The Premier League’s youngest-ever goal scorer (yes, really!), Vaughan had the world at his feet with Everton. He was supposed to be the successor to Wayne Rooney, but he struggled to establish himself in the first-team.

Vaughan spent time on loan at Crystal Palace and Leicester City, before leaving permanently for Norwich City in 2011. However, Vaughan’s career never took off after that, as he spent the next decade bouncing around clubs and divisions. Currently, he serves as the sporting director of Tranmere Rovers.

Having won the Copa America in 2011 with Uruguay, Hernandez was one of the stars for Palermo in the early 2010s. Hernandez had a fantastic 2013-14, hitting 14 goals in Serie A.

Palermo have new owners, who have quite an experience of running clubs. Find out who they are here!

That saw Hull City sign the striker, and Hernandez was a regular member of the squad in the Premier League. After four seasons and over a 100 appearances, Hernandez has spent time in Russia, Qatar, and Brazil. Currently, he plays for Mexican side Atletico San Luis.

Aguero: Winning Copa America Will Make Up For My Dismal World Cup