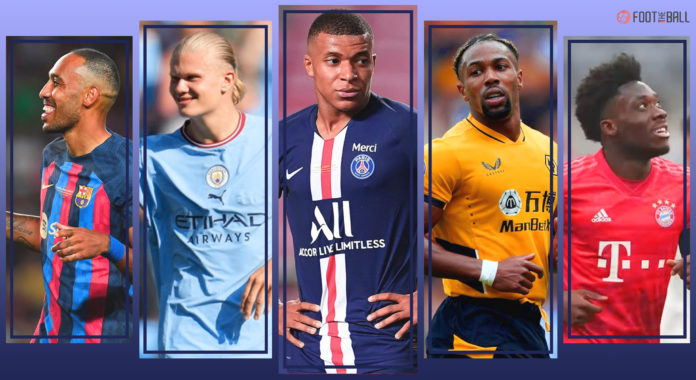 The name Cristiano evokes a lot of emotions in football fans no matter their allegiance. One of the game’s greatest ever players has inspired countless other budding footballers to take up the sport and has become an idol of the highest order. One such teenager is striker Cristiano Fitzgerald who was named after the great man himself.

The Irish U19 sensation’s main asset so far has been his explosive pace on the training ground, with speeds reaching 35.27km-per-hour. That puts him in the list of top-10 fastest players in the world and if he can manage it in a match, he will be number 10. FootTheBall runs down the fastest players in world football on their day.

Manchester City’s right-back is one of the quickest players in the Premier League and for his national side. Certainly, nobody can catch him amongst his clubmates who refused to believe his fake FIFA 22 pace rating. Walker has used his speed to great effect over the years, bombing up and down the right flank.

Crucially, that has also enabled him to make several last-ditch tackles when it was thought impossible. With age, Pep Guardiola has converted him into a right-sided centre-back or an inverted full-back to great effect.

Bellarabi might have had a career below the vast expectations set for him. However, he is renowned for his pace and crossing abilities. He had four goals and six assists in the 2019-20 campaign while his experience in the locker room is surely a calm presence for the youngsters.

On his day, Bellarabi can still torch defenders down his favoured right side as well as being an important asset to have when his team is in need of some spark.

Pierre-Emerick Aubameyang has been a prolific striker at the top level for nearly half a decade now. Besides his finishing ability and elite anticipation, his main asset has always been his speed. The Gabonese international is one of the fastest footballers in the world right now still at the age of 33.

Furthermore, Aubameyang can also switch plays from back to front quickly which enables the players around him to break at lightning speed in order to score.

Athletic Bilbao’s Inaki Williams has been setting record after record. The “Iron Man of La Liga” had broken another record after he made his 203rd straight appearance in La Liga in 2021. Williams, much like Aubameyang, uses his raw pace to get past his markers along with covering large distances in shorter periods.

Moreover, his quick feet with the ball in control enable him to face up to defenders one-on-one in dangerous positions and more often than not, beat them before bearing down on goal.

The “Terminator” has been a goalscoring phenomenon over his budding career and looks set to reach dizzying heights in the future. Haaland’s goal-to-games ratio is one of the best in the world and a large part of it is because of his extreme quickness. Using his supreme strength to hold off defenders, Haaland utilises his pace to get around them in order to get into shooting positions.

The prolific forward is now bossing the Premier League after joining Pep Guardiola’s Manchester City. Moreover, his speed also helps in chasing long balls over the top and passes into dangerous areas which he can latch onto more often than not.

The torchbearer of the next generation of superstar players in football, Mbappe has been a force to be reckoned with for some time now. Ever since bursting onto the scene with Monaco in 2017, he has gone from strength to strength. His pace needs no introduction as he is able to outpace most players on his day and score a lot of goals due to it. Now as part of the MNM trio, he has taken his game to the next gear and has seen him setting new records once again after penning a contract extension with PSG.

One of the finest dribblers in the Premier League whose shooting can be a little sketchy at times. Traore was the main attacking outlet for Nuno Espirito Santos’ Wolves. His performances earned him a dream move to Barcelona which didn’t go according to plan.

His quick bursts of speed coupled with ball-carrying abilities over long distances allow him to transition from defence into attack seamlessly. Furthermore, his crossing prowess is solid as he swings in balls whenever he gets the chance from the flanks.

Despite a bad couple of seasons, Marcus Rashford remains an exciting player with vast untapped potential. The Manchester United academy graduate likes taking on defenders one-on-one and seldom uses his pace to run behind the defensive line. Coupled with his dribbling ability and penchant to score ridiculous goals, Rashford needs to add consistency to jump into the world-class bracket.

The second of the two fullbacks at the top of this list, Hakimi has been a revelation since his explosive debut season with Inter. Hakimi was an upcoming star in the making before that as well with spells at Real Madrid and Borussia Dortmund but Antonio Conte really brought out the best in him.

His wingback efficiency was evident as he outran the strikers at times in order to get to positions of great shooting opportunities. Now at PSG, his partnership with Mbappe has flourished.

Before a heart problem ruled him out of football for some time, Alphonso Davies was a one-man-defence for Hansi Flick’s all-conquering Bayern side. The Canadian fullback had the breakneck recovery speed to come back on defence and thwart attackers from behind. Then, he would leave the opposition defender in the dust as he ran past them at the opposite end. Now back playing for Bayern, he would hope to put his health problems in the rearview mirror.