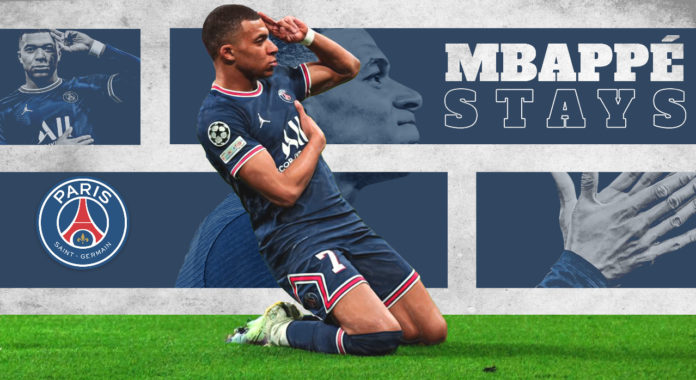 It is official! The most awaited transfer saga of 2021 and 2022 has finally reached its end. Kylian Mbappe, whose contract was set to expire in May, has chosen to extend his stay with PSG. He has seemingly rebuffed the advances of Real Madrid and Florentino Perez, whose dream was to bring the next Galactico. It came after protracted negotiations with both teams, as Mbappe jostled this way and that.

🚨 Kylian Mbappé will STAY at Paris Saint-Germain. He’s definitely not joining Real Madrid this summer, the final decision has been made and communicated to Florentino Perez. 🤝 #Mbappé

PSG have broken the bank in order to satisfy their superstar, and the details are mind-boggling. The money involved is an obscene amount for all involved surrounding the three-year contract. However, the main issue with many surrounds the future of PSG in the Champions League, the most coveted prize. Will Mbappe be able to win one during the next few years? Only time will tell.

Well, money certainly talks. PSG and Real Madrid fought it out till their last breath. Each club were always trying to one-up their offer. Mbappe did a lot of thinking (according to his camp), and though there were talks of a “sporting project,” no doubt money was at the forefront.

What PSG are offering Mbappe is almost unheard of in the transfer era. Not only will Mbappe earn €100m-a-year net salary, but his signing-on bonus of reportedly €300m is also practically unheard of.

👉 €300M signing bonus
👉 €100M a year salary AFTER tax
👉 He will help decide the coach.
👉 He will have a say on the sporting director.
👉 He can approve signings and sales

It gives all the more friction to the argument of players wanting to run their contracts down in order to become free agents. Erling Haaland might have commanded a “low” transfer fee, but his father, Alfie, will be receiving a massive amount of agent’s fees and commissions.

However, even Haaland will not have dreamt of getting the extra powers like Mbappe has reportedly been granted. With reports emerging that PSG have given him ownership of the whole PSG project, the truth may be a little in line with that.

Mbappe will supposedly have a say on who becomes the manager, sporting director, and can even approve or reject signings/sales. These are powers that are unheard of in the footballing world for a player. PSG are really going all out to make their quest for the Champions League end soon.

Are Real Madrid a better team than PSG? On paper, there’s not much to split the two sides. However, the difference was stark in the Champions League round-of-16 as a Karim Benzema-masterclass put the Parisians to the sword. PSG’s long-standing issues with the competition are well-highlighted.

They have capitulated time and again. Will Mbappe be lucky in the second go-around? Hard to say right now. The team will have to retooled a bit, given the under performance in 2021-22. Nevertheless, given they have managed to keep ahold of Mbappe certainly bodes well.