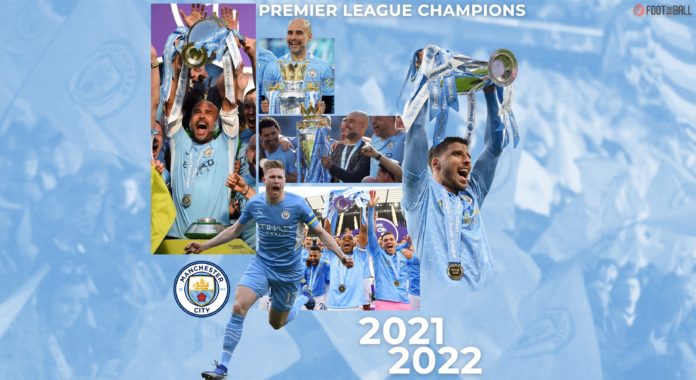 Ironically, as it came to the final matchday, the battle between two machines, who rarely dropped points, ended up being a test of whose collapse is the biggest.

At the end of the day, City’s late flurry of goals made all the difference as Liverpool’s late win was not enough to get them to the title.

However, it should be said that City tried their hardest to lose the title on the final matchday. Their game against Aston Villa was expected to be a routine home win for the Cityzens. However, it ended up being anything but. Villa took a 2-goal lead, with one being scored by ex-Liverpool star Coutinho, in a script written in the stars.

Relive the drama of the last game against Aston Villa in this match report!

However, City turned the clock back to 2012. Quickfire goals from City brought them back on level terms before Ilkay Gundogan tore the roof off of the Etihad Stadium with his 2nd, team’s 3rd and decisive goal.

The two sides served up a title race for the ages, the quality of football higher than ever in English football. In the end, City’s unstoppable machine was too strong for Liverpool who took every punch till the end but City wouldn’t submit. It marks the end of Liverpool’s quadruple dream but this night is about City and their success.

Guardiola’s side will finish having scored the highest number of goals and having conceded the fewest. Despite the challenge from Merseyside, they have been professional to the core, making light work of the most challenging league in the world.

City have played a very fluid brand of football while maintaining a very stable foundation. This was probably Guardiola’s most defence oriented side and still they have nearly 100 goals in the league.

The defensive line has been much deeper than during Guardiola’s Barcelona or Bayern or even his centurions in England. The lack of a truly pacy centre-back has been covered up with ease, something other clubs and managers fail to do.

Man City have scored 3+ goals in the second half of a Premier League game for the 7th time this season.

Midfield control and a very fluid attacking line have always been features of this era of dominance of Man City. The rotation and quality on ball is truly astonishing and there is no one better than the Premier League Champions at it.

Their unreal squad depth makes it difficult to point out any star players who were central to the triumph. Emerson remained crucial to Guardiola’s style of play with his excellent pings. Aymeric Laporte and Ruben Dias have been stoic in defence, ably backed up by John Stones and Nathan Ake.

Perhaps the most surprisingly good player has been Joao Cancelo who is one of the six nominees for the Player of the Season award. His pairing with Kyle Walker has allowed City to play with a freedom few sides can afford.

City’s midfield perhaps remains their biggest strength – a lineup of Rodri, Fernandinho, Bernardo Silva, Kevin De Bruyne and Ilkay Gundogan is as good as they come. Rodri has been the unsung hero, as defensive midfielders tend to be. Silva perhaps outshone his more illustrious team-mate De Bruyne, which is saying something for the Portuguese’s level. Gundogan and Fernandinho have largely been squad players but anyone would snatch at the chance to do so in this City side.

Despite the failed pursuit of Harry Kane and the teething issues of Jack Grealish, City’s attacking line has been prolific. The goal-scoring burden has been shared by the viscous ever-changing front line. De Bruyne has been their top scorer with 15 goals while Riyad Mahrez and Raheem Sterling have hit double figures as well.

They’re gonna get stronger- Here’s how Haaland fits in at Man City!

Phil Foden has continued to match the high standards he has set, people often forgetting that he is still just 21 years old. This might be Gabriel Jesus’ last season at the Etihad but he has had some memorable moments including crucial goals against Chelsea and Liverpool. The depth and quality in attack is truly amazing and it has taken every ounce of it to see off Liverpool.

From start to finish

City started the season with a 1-0 defeat to Spurs but they recovered quickly with back-to-back 5-0 wins over Norwich and Arsenal. After that opening day defeat, they only lost one match, to Crystal Palace in late October, to take complete control of the table.

They had a healthy lead over Liverpool in January but that was more a function of the Reds’ postponed matches due to a Covid outbreak. It was a second defeat to Spurs and then a draw to Palace that cut the deficit back and gave their rivals a look in. Guardiola though managed to rally his troops and get the job done. The last game was probably the biggest test of their mettle, but like true champions, they looked adversity in the eye and said, “Not today!”

What next for Man City?

Four titles in five seasons is no joke but for City, this success has become habitual. Their eyes are very much on the continental prize after coming so close in the last two seasons. They have already signed Erling Haaland for next season – this service line with a proper number 9 to serve making for a very scary prospect.

More tellingly though, it is how Guardiola manages his departures that will decide City’s trajectory next season and beyond. Fernandinho is on his way out as confirmed already while Bernardo has fettered next to the door for a couple of transfer windows now.

Rodri though has already shown what he can do and Grealish will perhaps be unleashed once Silva departs. City’s brilliantly functioning transfer strategy never misses a beat and next season will bring more silverware for sure but only time will it be whether it has big ears or not.

For now, City can enjoy a title well won and look over their shoulders without the threat of Liverpool looming.